Disclaimer: The scenario here is modelled after the M. R. Carey's book The Girl With All The Gifts and its sequel The Boy On The Bridge, so it will contain some spoilers.

Scenario: Most of human population and civilisation ended in the Zombie Apocalypse, which was caused by a parasitic fungus of the Cordyceps family. This pandemic happened in a matter of days to weeks, and was spread by means of saliva and blood through the infected and rapidly 'zombiefied' people. Initially, several thousand people, (in Great Britain) escaped being infected, but about a decade later, the fungal spores became airborne, so that there are only about one hundred survivors left (living in alpine conditions). Meanwhile, the children of female zombies who got infected in pregnancy develop a symbiotic relationship with the fungus, which modifies their physiology in the following ways:

These majority of these 'symbionts' grew up feral (in the absence of parental care), but organised themselves in 'packs' and later received some education from the 'survivors' (This is much of what the novel is about). About two decades after the apocalypse, the 'symbionts' form a society that is bening (and supporting) towards the 'survivors' and affine towards pre-apocalypse civilisation. The 'survivors' can provide school-level education and specialized domain knowledge (mainly life science and military), but there is little chance there are farmers, toolmakers, builders etc among them.

The actual question: Would the 'symbionts' take up animal husbandry, or sustain themselves with hunting?

I think this question is interesting because it determines the direction of where this civilisation is developing. Hunting provides more immediate gratification, but inhibits specialisation and would send the society into a direction of a primitive society that simply depletes the resources from pre-apocalypse civilisation. Animal husbandry requires more foresight and work, and at low population densities is not necessary, but would allow for specialisation and provide a basis for an Amish level of civilisation.

Here is some speculation on my part, but I might be wrong:

Initially their population density (there would be 'tribes' of some dozens in each major city) would allow for getting by with hunting, but as their numbers increase, the need to exercise extensive animal husbandry, focussing on providing pasture and eliminating predators, would increase. Furthermore, the 'survivor' enclaves would probably encourage and enable the 'symbionts' to do animal husbandry.

I hope the scope of this question is narrow enough for this site. I'm open to make further edits as needed.

I suggest that the way these symbionts are written precludes their ability to form a high civilization, although they can presumably "mine" the ruins of the old civilization for generations.

Problem one is the reflexive response of the "hungries" to the presence of warm blooded animals. Attempting to keep animals on farms, in feedlots or (perhaps worse) in factory farm conditions will trigger the hunter/killer response in both the "farmers" and any passers by. Imagine a small group walking down the road when they sense a herd of cows. Suddenly they turn into feral creatures only somewhat smarter than a pack of wolves, tear over or through the fence and begin feeding. The "farmer", coming to investigate, suddenly smells lots of blood and fresh meat, rather than a farmer coming to protect his herd he becomes another feral animal racing to get its share of food (and possibly now having to deal with pack dynamics: does the feral farmer submit to the "Alpha"?).

Since this will happen repeatedly, the stock of domestic animals will be depleted rapidly (indeed, there was no sense in the first book that any domestic farm animals had survived). Feral symbionts will now be forced to hunt wild game in order to survive.

The second issue is the symbiont's life cycle. Since the creature will die in early adulthood to support the fruiting body of the fungus, there will be limited time to learn skills needed to master technology. Given the symbionts will likely be spending a great deal of time away from the cities hunting for food, this simply does not leave enough time to accumulate the skills needed.

Thucydides points out the difficulty these symbionts would have with animal husbandry: the zombie state, where they kill animals they perceive. There is only one workaraound I can think of. Yeah, you guessed it. 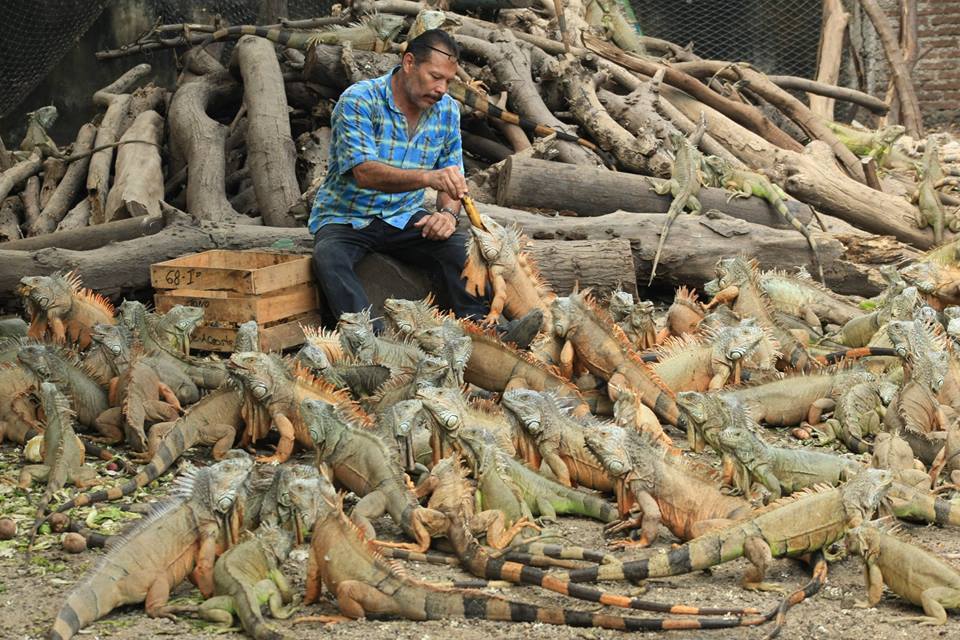 Shrimp / crayfish / carp farms would work too but the pictures of those are not as fun as the iguana farm. Ooo - alligator farms too! That would be good for zombie world.

Not the answer you're looking for? Browse other questions tagged society environment post-apocalypse zombies or ask your own question.

18
So we've survived the apocalypse. What's next?

21
What are the requirements for the zombie in order to reach a full zombie apocalypse?
8
How would US survivor society react to a zombie fungus that is airborne once a year?
36
What kind of land transportation can be used for plowing through hordes of zombies?
13
Plausible Components for Zombie Immunization?
2
Designing long-term, non-magical zombies
4
What is the best-case-scenario for farming in the post-apocalypse?