Sea of Fire in Polar Regions

Would it be possible to have a cold and remote polar region if the oceans are made of fire? By that, I mean that in the place of water, there exists lava.

Considering Earth as a template planet, probably not.

If the seas of your planet are molten lava, their temperatures would be in the 700-1200 °C. Let's assume 850 °C as an average. That is hotter than the mean surface temperature of Venus. Since lava usually contains greenhouse gases, your planet would be probably be a Venus on steroids, and its temperature would be the same anywhere.

Even if your planet didn't start out with an atmosphere (so as to maintain a separate temperature on landmasses not covered by magma), the magma itself would release gases that would make an atmosphere over geological time.

Now "cold" is relative, but the poles of that planet would not be "cold" to us.

I don't think so. 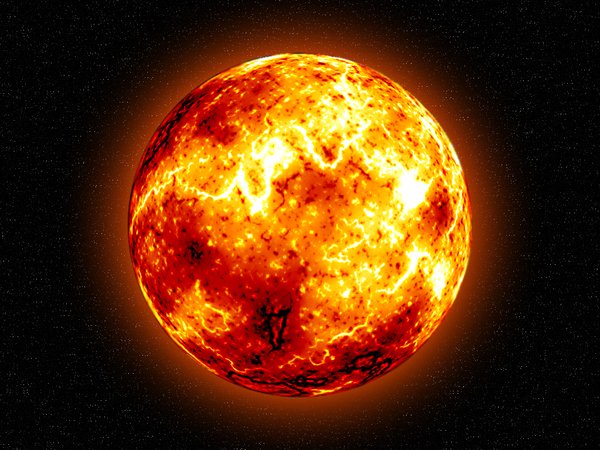 there'd be no possibility for anything like a cold polar region. In those times, the atmospheric temperatures were something like 2000̊ C. Not really conducive to nippy polar conditions!

Several times in Earth's history, there have been flood basalt eruptions that covered large areas with lava. From memory, one of them occurred in Siberia. I don't see any reason why they couldn't occur over the poles.

Not the answer you're looking for? Browse other questions tagged climate weather polar-region lava or ask your own question.

7
Open Polar Sea feasibility?
6
What is the climate of a mountain range at the border of the polar front?
7
The Polar Pangaea
5
Hamada this place! Plausibility of hamada desert features in a polar region
4
South Polar Bears
6
Can a planet have warm or temperate climates within its polar regions?
5
Would the melting of ice islands affect the weather across the seas?
6
Abnormal Freezing Weather
4
How could a human society survive in areas with average annual temperatures below -30°C?