My question is: could this type of technology be accomplished and what would be the legal ramifications of it?

The THOR system in use by US forces is a phone signal jammer to prevent cell phone and radio initiated IED detonations. Basically what it does is detect radio signals and identify the troughs and peaks of the frequency wavelength, it then modulates its output to produce a peak where the detected frequencies trough is, and a trough where the detected signals peak is, only at a LOT higher power output. To explain it with a metaphor, if you were trying to talk to somebody and I stood behind you repeating everything you said only slightly out of sync and at a full scream then you would be unable to speak to anybody. Basically the same concept, the cellular and radio devices are not able to identify and translate the frequency into anything useful through all the noise.

They are quite small, the THOR pictured here is actually the last gen system, the new MJOLNIR system is about 1/3rd the size at the same power output. They have a line of sight limitation as walls and stuff stop them from working, but with no obstructions systems like this have an effective range of several hundred meters. 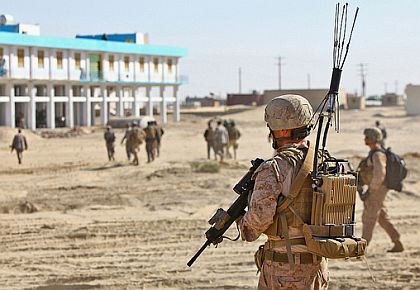 As far as legal ramifications, they aren't really allowed to be used within the US because of regulations by the FCC. They can potentially interfere with emergency equipment, sensitive electronics, emergency responder radio traffic, and life saving medical devices like pace makers. They pump out a LOT of power, if you wear one for too long you get a splitting head ache from the radio frequencies resonating water molecules inside your body. The larger ones like the CREW system deployed on vehicles can black-out transmissions at up to a kilometer and if you touch the antenna while it is operating like I did on accident once you will get a radiation burn on your hand and all the skin will peel off after a few days. The biggest legal ramifications of such a system in commercial use are liability related. High power High frequency RF transmissions are nothing to mess around with. This is primarily why the FCC regulates which frequencies and power outputs can be used in certain places and for certain applications.

Not quite a technology, but a convenient legal framework - just mandate by law that each mobile device must have a backdoor that listens to a prearranged signal and obeys the (perhaps only a limited set of) commands.

Note that government mandated weaknesses or backdoors are not uncommon, so it is just a matter of approving the law if the public is distracted or indifferent enough and this can happen quite plausibly in our world.

Not the answer you're looking for? Browse other questions tagged technology technological-development near-future future or ask your own question.

9
How long will technology (satellites, GPS, Cell Phone) still work after civilization is destroyed?
13
If all our technology disappeared, how long would it take to make a smart phone?
46
“Life post-Singularity”, or “How to survive without Instagram”
17
How viable would an analog computing revolution be?
9
What would be in a shuttle's survival kit for aliens trapped on a primitive planet?
5
Are Alpha and Beta-Voltaics the solution to the energy storage problem in Scifi?
0
How far would technology have progressed for a 100 person tribe with knowledge of current technology in 15 years?