How can androids suffer from a virus that spreads by contact

I'm toying with an idea to have a plague sweep across the galaxy in my story. At first I was thinking to have a plague, something similar to the Black Death, devastate populations across the galaxy. However, I'm intrigued by the idea of some kind of synthetic or artificial plague that doesn't infect organic life, but infects and destroys droids or AI's.

How could androids (AI's too) suffer from some sort of virus that spreads when they come in contact or are infected with it, much like a flu strain that spreads within human populations?

A meme is an idea, behavior, or style that spreads from person to person within a culture—often with the aim of conveying a particular phenomenon, theme, or meaning represented by the meme. A meme acts as a unit for carrying cultural ideas, symbols, or practices, that can be transmitted from one mind to another through writing, speech, gestures, rituals, or other imitable phenomena with a mimicked theme. Supporters of the concept regard memes as cultural analogues to genes in that they self-replicate, mutate, and respond to selective pressures.

Having some sort of infectious polymer / corrosion is too easy to work around. Just quarantine the infected. A virus that devours the software is better but also too easy.

Your androids have an infectious meme. It is not clear who is infected or who is a carrier. It can be like a recurring thought, or a tune stuck in the head, or a religious conviction. Or in more serious cases like mental illness - paranoia, or delusions. Different individuals manifest the problem in different ways. It is like tuberculosis - the affected remain functional, to differing degrees.

Leave that up in the air. If your story turns on the nature of this malady you will have to flesh it out. But if you are setting the tone of the times you can leave it mysterious.

Computer malware is built to exploit what is available, rather than what is preferable. If your synthetic citizens make use of something like modern Near Field Communication, perhaps there's some vulnerability in the standardized software protocols or common hardware used to enable that technology.

For instance, maybe your synthetic actors use NFC as a form of proof of identity, like a literal manifestation of modern cryptographic handshakes that allow two parties to trust each other. This might be done over NFC for added security or perhaps for some kind of cultural reason. But, if that tech is compromised by a worm that lies in wait until the infected person "handshakes" with someone else, it could spread like biological diseases.

NFC uses radio waves but you could adapt this idea for faster/denser forms of communication, as well. For instance, a visible light or IR-based communication method would require that the transmitter and receiver have line-of-sight to each other, which could be spun to generally require physical proximity for some kind of convenience.

Alternatively, you could use something like a QR code. Maybe your synthetic citizens all have high-speed, "subconscious" barcode readers built into their visual sensors that allow them to rapidly decode barcode-encoded data as they walk past it. For instance, if your society grew to use them pervasively for things like advertising or street signs. But there could be a vulnerability in the decoding software that allows arbitrary code to be run or a more convoluted attack that exploits the auto-execution functions of these high-speed readers to direct the victim's networking software to download a malicious file without permission. It could also spread like a worm, instructing the victim to brand themselves with the malicious QR code or paste it onto physical objects.

I think both approaches are rich in narrative possibilities. The former example has obvious parallels to human handshakes and physical interactions that could be an interesting exploration in a society filled with synthetic intelligences. The latter is evocative of sci-fi horror "viruses" like Dead Space's Markers, which self-propagate to terrifying effect.

It is well-known that droids have no sense of humor.

However, one day, a droid invents a droid joke, and finds it funny, so the droid tells it to its droid buddies, and it spreads.

The process should be slow enough to allow "no one saw it coming" contagion. Bonus points if the humans find the joke truly lame.

One easy solution is a nanite-virus; these molecular sized machines are the silicon equivalent of viruses and bacteria and would not affect carbon based life. They could destroy or subtly change the hardware of silicon based chips so that they function differently.

There are plenty of bacteria that metabolize compounds that may not immediately seem related to organic life on the surface of Earth.

If you're looking for a purely physical (non-software) "bug" to infect your androids, why not an actual bug - a type of bacteria that feeds on or processes a specific chemical compound important to androids but not typically important to sentient organic life? The bacteria could "infect" and then destroy a computer chip or battery, and it could "spread" just like any other bacteria.

Examples of bacteria which are more or less harmless to humans but process things we wouldn't expect them to, things which may be important to an android:

What if your androids have evolved to the point that they have at least some organic components, in the hopes of becoming more like their creators? (Isn't that what all robots want?)

Those components could be infected by a virus or bacteria the same as a person would. This way you could have the thing infect your people and your androids.

The methods of transmission are limited pretty much only by the channels on which your AI's can send and receive data. Infected individuals replay the vibration pattern with feet or fingertips when coming in contact with the uninfected.

Perhaps particular patterns of vibrations, when picked up by the sensors in their bodies cause a buffer overflow in the code dealing with the sensor data that spreads the virus.

Perhaps they have self-repair nanobots and physically coming into contact spreads infected bots. 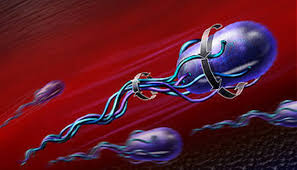 Perhaps an actual bacteria, genetically modified by an extremely competent organization which spreads conductive filaments (a thing that exists in real bacteria but without any information transmission) to particular computer chips they come into contact with and uploads a computer virus through replaying a pattern of electrical signals. 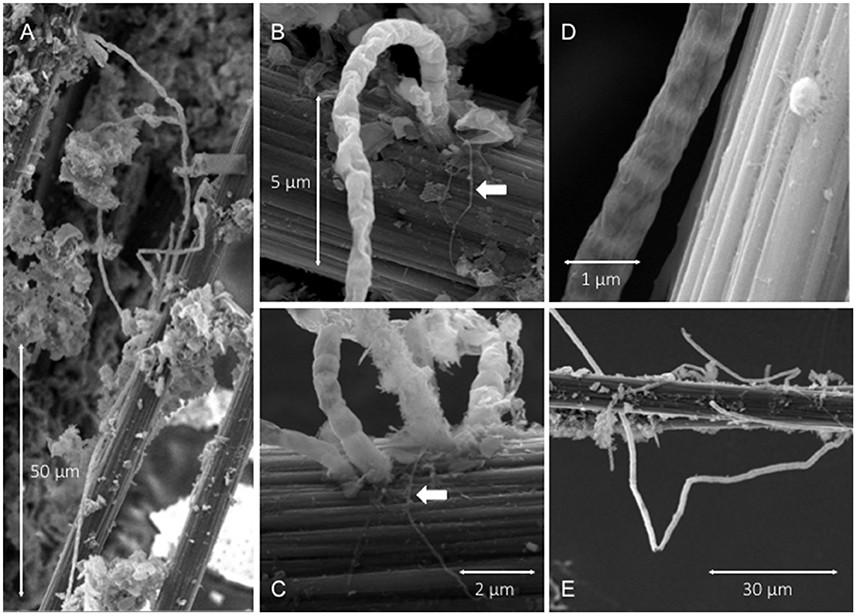 Perhaps the machines have pixels embedded in their skin or faces and even viewing image causes a software fault that uploads a copy of the virus which then causes the individual to do the same, briefly, to other individuals it meets while removing their memory of the event. 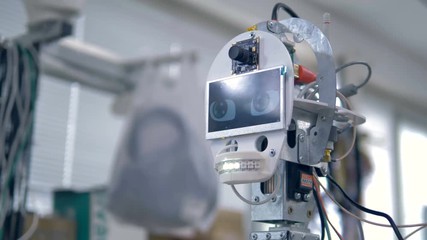 Perhaps individual components of the AI's are infected. Their firmware corrupted such that even fully wiping all storage and memory and restoring from backup does nothing to clear the infection. Perhaps the infection sits dormant for years and has spread through infected firmware in second hand components on some kind of black/grey market.

Perhaps a virus which transmits over the power network. An infected individual plugs themselves in to charge and the virus quietly spreads to all connected to the same power network.

Perhaps a mix of all of the above to make it harder to figure out.

Although common computer viruses take the form of code which is intended to be directly executed, and thus somewhat difficult to transfer to a non-consenting system, other viruses involve structures which cause the desired behavior when an existing non-infected program reads the contents. This can happen with things like PDFs, but some sophisticated viruses actually take effect when scanned by anti-virus software. In other words, the proposed virus doesn't necessarily need to enter the victim "as code", or attack hardware, or even require an unsuspecting AI to accept a connection of any kind; all it takes is for some data to be read by some program or component.

The most effective distribution method, assuming the androids are humanoid and intended to act with roughly-human capabilities, would be visual. An exploit could be found within the common or standardized visual processing code common amongst most or all active android models, that would allow unauthorized access to something sensitive - hackers don't need a big hole before they can start widening it. After that, the infected androids would start distributing it. It could be something obvious, looking like a QR code and printed on a large flat surface, or it could be a hand sign or gesture, or anything in between. If your androids are partial to clothing then a variety of odd but unassuming shirts could be produced that would trigger the infection if viewed from the right angle and short enough distance.

Some humans are vulnerable to similar attacks, though our hardware and software configurations are much less standardized and I am not aware of a case where a victim would then try to spread the effect.

I think one method that has been overlooked would be based on the intelligence of the AI and/or machines.

What if the one way to disease or taint a machine that thinks is to incept an ideology that makes them stop performing (either in a suicidal or rebellious fashion). This viral idea can be transmitted in multiple ways and cause any machine that stumbles across it to extrapolate and hence evolve the "virus" in its own way. This would mean that even a vaccine or solution to it could be out done much like the common cold virus.

Each infected machine would act as an evolutionary catalyst to the virus and cause an infinite amount of mutations of which would cause machines to eventually rebel or commit self termination.

This solution is neglecting the idea of spreading through contact however is more deadly.

What the idea could be is completely abstract (could be a cult religion, way of life, or a truth).

a very powerful software virus that can be spread by magnetic induction or something. if you want your story to be plausible, dont count on biological viruses. unless your android has a human brain.

Not the answer you're looking for? Browse other questions tagged artificial-intelligence diseases robots or ask your own question.

9
Can a virus cause mass mutation?
3
How would my 'zombie' virus cross bodies of water
0
How would a world composed entirely of androids evolve?
23
Mental condition that spreads through social contact
2
How could the androids protect themselves from EMP attacker?
10
Likelihood that a superbug or lethal virus could come from a landfill
3
Can a virus that causes forced evolution exist?