Regular people are too big and heavy to fly on their own (i.e. without magic or internal combustion), but I'd like to have the fantasy equivalent of the Royal Flying Doctor Service so...

Could someone fly if they were smaller than a regular person, just how small would they actually need to be to fly on their own yet still look like a normal person?

[P.S. Gliding down from a tall tower and walking back would also be acceptable]

In response to comments:

worldbuilding.stackexchange.com/questions/25466/… seems to be aimed more at full sized people and their evolution, and as one of the answers states

Seeing as "classical angels aren't 3 feet tall, can we shrink the people to compensate? (after all, we have the square-cube law on our side for once)

What would humans wings need to be like to fly?

The response to which was:

On an Earth like planet (same atmospheric density & gravity) humans can not fly. Our configuration makes us too massive to fly given our skeletal-muscular structure.

So... smaller is better?

And as for https://worldbuilding.stackexchange.com/questions/23145 well...

[Your] flying humans would have enormously over-long arms and clumsy few-fingered hands. They would have large massively muscled and protruding chests and thin fragile skulls.

Which is not the look I was going for and that's for a full sized person, as people get smaller (and lighter) I'm guessing there's more margin to have them look like regular people (I've added a note abut that to the question) 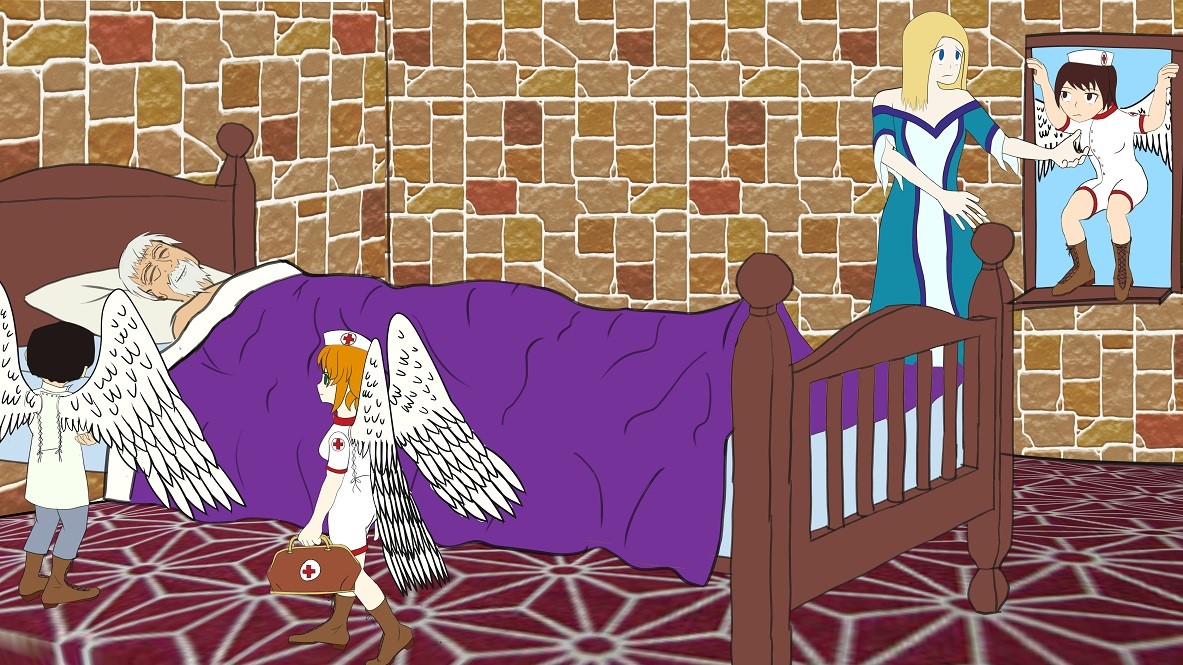 This feels like a dangerous area to answer. There are far too many pre-assumed conditions for angels and their relationship with an Abrahamic diety for me to be comfortable making suggestions.

I enjoy the picture of the Flying Doctors. I see that the doctors have wings but the woman standing by the window, and perhaps the sick person, don't have wings. This suggests that either:

As must have been discussed here, the difference between primarily flying and primarily walking creatures goes far deeper than wings. All of the body systems in fliers have adapted to reduce body mass and lower the energy required for flying. A partial list of examples:

These are structural changes, not simply changes of scale.

Other practical matters would include feet. Flying creatures have various ways of transitioning from air to ground. Waterbirds act more like airplanes, running along the surface of the water to take off, and gliding on the surface of the water when landing. Other birds typically come to an aerodynamic stall and grab onto the surface. Landing in a window would be difficult because at the moment of the stall the wings are extended fully, but the center of mass for human-style feet needs to be over the feet.

IMO, how you shape the flying doctors depends on the other constraints of the world. If it is a hard-science story, you could use something like:

Soft-science or magic are easier because one doesn't need to have plausible equations.

Looking back at these paragraphs, I realize that I haven't answered your question at all.

Specifically as to size, yes, smaller is better. Unlike some of the discussions, you are not asking that the wings be formed from the arms. You have an additional set of appendages for lift. You also allow for gliding from a tower, so you don't have the problem of generating all the vertical potential energy from the wings. There is no specified a glide slope, so the amount of lift isn't determined, but you need enough lift for reasonable range, and enough lift to do a flare-to-stall at the end.

I'm still not answering the question. Thank you for the interesting diversion.

People in wing-suits can sort of fly (falling with style?) and a parachute effectively automates the flare-stall-landing process, so your winged humanoids could potentially fall-fly down from a high mountain peak or hot air balloon. They wouldn't need to be much shorter than regular humans indeed being light and lanky would be optimal if they're using wing-suits instead of or in addition to their wings.

Not the answer you're looking for? Browse other questions tagged fantasy-races flight .

32
Anatomically Correct Angels
25
How to make a flying human
8
What would humans wings need to be like to fly?

4
What would be the best way for a supernatural entity to fit into a physical body smaller in mass and volume?
5
How fast could a bird-like human fly under optimal conditions?
8
Can a horse-sized flying creature grab and carry a human's weight while flying?
8
Is my idea of Wyverns realistic?
4
Humanoids with wings, how do they take off?
3
Seating in Integrated Cities - Not all humans, different species