Why would be preferable use crossbows than firearms? [closed]

First of all, I am aware that its impossible for a planet with less gravity than the Earth, to naturally maintain an atmosphere with the same terrestrial gases, in an equal or greater proportion. Therefore, this proportion of gases is maintained artificially.

Second, although I have notions of what the ballistic coefficient implies, I have no idea how to calculate it or in what proportion its affected by the atmospheric density and gases of an atmosphere.

Following with this line of thought, we have the force of gravity of the planet X that is 8.04 m / s².

Let us assume then that the atmospheric pressure of this planet, whose atmosphere is being altered artificially, is approximately 2 atm.

Now with all the elements previously presented, I would like to know two things:

Note:Take into account side effects that may present apparently inert gases at high levels of partial pressure, such as nitrogen narcosis.

an atmosphere with the same terrestrial gases, in an equal or greater proportion.

the atmospheric pressure of this planet, whose atmosphere is being altered artificially, is approximately 2 atm.

Note that since the partial pressure of oxygen would effectively twice that of Earth, fires would burn faster.

Would this atmosphere sustain intelligent life in a realistic way?

Native life would/could have adapted to it, so there's no reason to say "no" to this hypothetical question. So... yes.

It is necessary to know if a human civilization could develop there.

If these are "humans which evolved on Earth, and then transported to this planet", then the answer is maybe. That's because nitrogen narcosis can begin even at relatively low depths when scuba diving, and 2 ATM of pressure is the same as diving to 10m.

Thus, enough people just might be loopy enough to die off within a few generations.

Would the effect of this atmosphere be enough to significantly affect the ballistic coefficient, to the point where its preferable to a civilization that has discovered firearms, have to continue using crossbows for more effective shots at a distance?

The question is flawed, because we didn't develop firearms because they shot better and farther. We developed them because they were easier.

Note that since there's so much more oxygen at 2 ATM, the gunpowder would burn a lot faster, generating a lot more pressure in the gun breaches. It's very possible that would have delayed the development of firearms (and cannons) until the development of better metallurgy.

No, and at a first glance neither would the higher oxygen pressure.

But you might imagine have large quantities of dry pollen floating in the denser atmosphere. This would require a great care in lighting fires (fireplaces would need something like a flame arrester mesh).

But in the open, firing a gun might be a deadly mistake - unless it had just stopped raining, or the weather conditions or season or geographical features otherwise allowed it. The combination of high oxygen pressure and suspended combustible particles would turn the volume around the shooter into a dust bomb, a weak form of fuel-air bomb. With the shooter at the center.

In Earth atmosphere, it takes some doing for a dust explosion to take place - but if memory serves, a bunch of probationary cooks engaging in a flour battle near cooking fires in a kitchen in Paris was enough to kill one and maim two others, and wreck the kitchen.

Combine some local plant like lycopodium, but more so, and a higher oxygen availability, and wild gun shooting loses a lot of its appeal.

Firearms were adopted because they were easier to train large numbers of people to use quickly than long or recurve bows. They replaced crossbows because a crossbow bolt, fired from a steel crossbow and drawn with a spanning mechanism could provide about 200J of energy at the target, while an arquebus imparted enough energy to the projectile to deliver 1000J of energy, an order of magnitude difference. 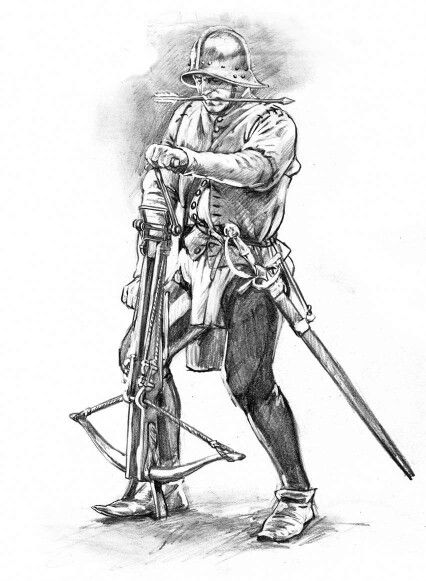 Spanning (or drawing) a steel crossbow. This gets you to 200J of energy 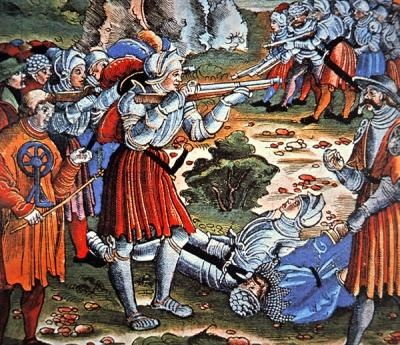 A Medieval soldier with a firearm. A 1000J of energy can deal with even heavy plate armour

Any crossbow which can deliver that much energy would be either far too large to carry or use in any practical manner, or require such a massive and powerful spanning mechanism that would also be impractical for use in battle outside of special situations.

So regardless of if you are fighting on Earth, the hypothetical planet, or even the vacuum of space (both a crossbow and a firearm will work in a vacuum), a firearm will always outperform a bow.

Not the answer you're looking for? Browse other questions tagged science-based reality-check environment atmosphere firearms or ask your own question.

8
Breathable Mars?
5
What would happen to a high-pressure creature in a low-pressure atmosphere (50atm)?
11
How can I tell if an atmosphere is suitable for life as we know it?
4
Using liquefaction of gases to make an habitable dome
5
Looking to optimize the atmospheric gas mix and pressure for humans for minimal cellular degeneration
6
How to roughly extrapolate artillery range for planets with different atmospheric pressure?
8
What gases could be present in a viable atmosphere for humans?
7
How to calculate the average temperature of the hemispheres of a planet tidally locked to its star?
4
How does composition change if you extend an Earthlike atmosphere 50km below sea level?