What skin colour would living permanently on the moon select for?

There is a population of people surviving on a lunar-analogue's surface, descended from the crew of a crashed spaceship. The rest of their society is not relevant to the question, but their technology includes cobbled together habitats and void suits that protect against some solar radiation but not all (an arbitrary amount that allows them to maintain a population, but not necessarily easily).

What skin colour would this select for? I'd initially say a pallid white given the lack of UV exposure, but I've recently stumbled upon research which suggest melanin provides at least some protection against gamma radiation: https://www.news-medical.net/amp/news/20110824/Melanin-also-protects-from-ionizing-radiation.aspx

The question is, what skintone would partial protection from gamma radiation on a longstanding permanent lunar culture select for?

For reference, this is for an art project where colour palette will be important, so injecting some realism into the skintone and working from there would be the way to go.

I am reminded of the teeth of the numbat. 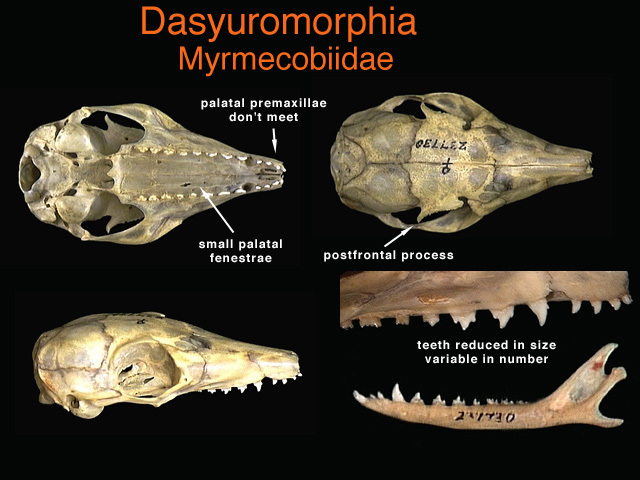 The numbat has more teeth than any other land mammal. Tooth number and shape vary between individuals. It does not matter to the animal because none of the teeth are used at all. The numbat eats with its tongue exclusively.

The variability in number and form of teeth, as well as the lack of significant tooth wear have been cited as. evidence that the teeth are used very little and so are not subject to intense selection pressure (Calaby 1960). https://www.environment.gov.au/system/files/pages/a117ced5-9a94-4586-afdb-1f333618e1e3/files/22-ind.pdf

So too skin color for your moon people. Skin color for earth humans is influenced by evolutionary pressures that have to do with UV damage / vitamin D synthesis. Absent selection pressures for or against given colors, skin color would evolutionarily drift, like the number and shape of teeth of the numbat. One could invoke this to explain why different individuals were colored differently one to the next: it is random.

Note that it has taken the numbat millions of years for its teeth to reach this state. But with a small population you could have evolution / genetic drift happen faster.

You have only two perspectives that would affect skin color.

If your intrepid crew's descendants haven't experienced at least tens to hundreds of thousands of years, then their location has nothing to do with their skin color. The politics and social mores of the society that launched them into space would have everything (as in 100%) to do with skin color.

There would be no evolutionary pressure for a specific skin tone for living on the Moon, because -- even were we to colonize the Moon -- no one lives on the Moon like they live on the Earth.

That's because people will live inside all the time, getting their Vitamin D from either food or the interior lighting.

It's somewhat similar to white people living in Australia. You'd think that Europeans with darker skin would be more genetically successful, but they aren't. Why? Because clothes (and hats) shield them from the excess UV, while allowing enough to get to the exposed body parts.

It won't differ much from the mixture available in the founders' pool.

The reason is simple: while when our ancestors moved out from Africa to colonize the world had the pressure resulting from lower UV exposure that allowed for the selection of paler skins, I am pretty sure your colonist would be assuming integration vitamin D, removing any need for the body to adapt.

In the case they would not be assuming vitamin D integrators they would still keep the original mix for quite some time: it takes lots of generations for a character to spread, and humans are not that fast breeders.

Since skin colour affects appearance, sexual selection comes into play. Whatever skin colour their culture finds most attractive is what will be selected for.

I do not know if more dangerous rays can trigger the same reaction in the skin as UV light does, but I expect they don't.

These people would most probably suffer lack of melanin as well as vitamin D. So they would need some sort of artificial sunlight source. Expect european people to be a bit paler if they do not attend their artificial sunlight exposures, but otherwise there shouln't be much difference. Tanning and skin color have very little to do with each other. One is a reaction of skin on dangerous environment and the other is a genetical predisposition.

Your people are protected from UV so there's no pressure towards dark skin. If they're eating a balanced diet, there's also no particular pressure to produce more vitamin D. In that case, no skin colour would be preferred. The people's protection against UV exposure and sufficient vitamin D in their diet means that skin colour will have no influence on whether they live beyond child-bearing age.

As already pointed out - there would be no real external evolutionary pressure, thus sexual selection would be the way to go.

Long term: Survival of the cutest. (but it is based on assumption, that there would be either a lot of time or possibility to pick designer babies)

-light skin (setting all PC aside, its not a recent phenomena, but something more entrenched. According to records in East Asia lighter skin was being perceived as attractive even in times when Europeans were just considered as some distant barbarians; moreover even in Europe there were periods when lead based white makeup was top trendy)

-blue eyes, blond hair (those genes are recessive, so would not manifest easily)

-tall (it's also selected in sexual selection, and in low gravity setting it would have less drawbacks)

Gamma absorption (absent resonances which are not relevant to the broad-spectrum gamma you get in space) depends pretty much exclusively on the density of nuclear matter in the way, which translates pretty exactly to the mass of absorber. So to absorb significant gamma, your skin would need to get more massive (a lot more massive), not change color.

It could become thicker or, conceivably, become denser by somehow developing calcium deposits. But never forget that any evolutionary change incurs a fitness cost as well, and evolution would balance the fitness cost of thicker (and hence higher energy cost and also less flexible) skin against the gains from increased gamma radiation resistance.

The only effect that gamma exposure would have on the evolution of pigmentation is to potentially speed the process up by causing a higher rate of mutation. If there was selection pressure for a change in skin color, that process might well be sped up. But where the increased mutation rate took the people would depend on other things.

A detail that heavily effects the answer is what temperature is maintained in the colony. Several complex factors will effect temperature, and you can basically choose whatever fits the story. Temperature will effect how much clothing is worn. Amount of clothing then effects melanin levels.

If you are assuming sufficient clothing to block UV, then then assumption that gamma radiation will have the dominating effect is flawed. If opaque clothing has a negligible effect on blocking gamma rays, then so will opaque skin. Since high energy gamma rays penetrate opaque clothing they will penetrate skin as well. Clothing will actually perform better than skin could. Based on the description of the environment, it seems likely that clothing will be made from animal and plant tissue. Many animals and plants will adapt to the environment faster then humans due to shorter life cycles and selective breeding. This means clothing will more quickly adapt to blocking any radiation that can be blocked than humans will.

There is one way melanin might have a greater shielding effect than clothing. If a much thicker layer of opaque tissue could be used for shielding than just the skin. This could lead to the possibility of pale semi translucent skin for vitamin D with melanin rich fat, muscle, and or bone tissue. It sounds like you are wanting a very striking look and a way to justify it, this combination may be fitting.

I'm not sure if this is the convention, but after some more research and reading all these answers I think we may have come to something approaching an answer.

So, it seems we have a number of factors that influence skin colour:

Original population genetics sets the startpoint and pre-existing genetic variety, but we can split the rest into pale-selecting and dark-selecting pressures:

From these, for our lunar population we can discount Vitamin D production (in order to protect from UV they'd have to avoid direct sun exposure, so vitamin D would likely be sourced from food). We can also probably discount the resource cost of producing melanin given that it's taken so long for numbats to lose their expensive-to-produce teeth (I'd like to find some other data points for that). Sexual selection is an interesting one, but considering the relative stability of skincolours and lack of sexual dimorphism it's probably pretty weak.

Unfortunately, there's a maddening lack of studies comparing the relative damage of gamma ray and UV exposure. Closest I've come to finding something is a load of people stating how difficult it is to compare them and one guy who's actually done something and found that 6J/m² of UV exposure and 4 Grays of gamma exposure killed the same amount of chicken cells (conditions unknown so not the greatest test but it's all we've got).

The highest figure I can find quoted for average radiation on the lunar surface is 120 millirem per day (others hover around 50 millirems), which converts to 0.0012 Grays of gamma radiation. Practically nothing. Wait, why are we scared of gamma radiation on the moon again? Unless they're quoting shielded figures, or the 6-to-4 ratio of that guy was for one layer of cells (so gets multiplied by each layer of cells the gamma rays reach that the UV rays don't).

The only thing I can see that would be a problem gamma-radiation-wise is the recommended maximum radiation dose for fetuses (50 millirems per month plus the 25 millirems background). So, sod all effect on adults but very dangerous for kiddos, unless I'm missing anything major.

Oh, and apparently during an 18-month study on Mars there were 2 events which saw radiation increase to 2000 millirems per day (0.02 grays).

Edit: apparently the safe level for radiation exposure in US legislature is 5000 millirems per year, or 13.7 millirems per day. Lower than the level our lunites will be receiving. So, leaning towards the jet black option of the two above...

Not the answer you're looking for? Browse other questions tagged moons space-colonization .

11
What would make the moon flicker?
15
What would happen to Earth if the Moon was destroyed?
5
What benefits would having a second moon bring for humanity?
4
What effect will mining on the Moon have long term?
3
What would be the effects of a large moon?
5
Will be possible in the far future to create an artificial Moon for Earth and terraformed planets?
8
What would an asteroid impact feel like to someone standing on the moon?
1
Living on a moon with an atmosphere, how would the planet interact with the sun in the sky?
2
Base on the Moon for interplanetary travel