Would a large delta allow my desert people to feed a continent?

Context : In a world, very similar to our good old Earth, with late medieval technology, a great kingdom has united a whole continent. Except, that is, for a small country, located southernmost of this middle-sized continent. This nation, being near the equator, faces intense drought all year long.

The thing is, our little country, while bearing with desert climate, needs to be able to feed its people and still sell a whole lot of excess to the kingdom. This nation of farmers have to provide at least half of the food for the whole continent. Assume a population of about 20 million people, total.

The answer : A large river runs throughout the continent, finally meeting the sea deep inside the territory of our farming nation. I was thinking of giving it a huge delta, to make this land a bit more fertile. Think about the Nile, who provided ancient Egypt with plenty of arable land.

The issue behind the answer : Said example (the Nile) was flooding. A whole lot. I don't want my little country to face this kind of event. Still, I want them to provide food for the greater kingdom North.

The question : given this setting, my question is the following :

Is it possible for a country facing harsh climate to grow food in excess, thanks to a delta ? If so, how large would said delta need to be ? I read that flooding was what made the Nile bring all those useful sediments, and I don't know if a non-flooding river will impact farming in this environment.

Edit : these are great answers, thanks a lot. Here’s a little clarification, for those who asked. The big kingdom relies on this particular country for several reasons. First, having unified the continent recently, the king is facing uprisings. To those filthy rebels, one must add external threats. Also, unstable political game. Our tiny farming country just isn’t enough of a threat to be dealt with.

Also, in the past, big almighty kingdom tried to invade and secure the food sources for themselves. Turned out that our peaceful farming nation is especially good at dodging conflicts, and has another ace up their sleeve. But that’s a story concern. So just assume that the great empire is forced to deal with this fact. Also, transporting the food is not an issue in this particular context, but feel free to bring more precision, to potentially help others.

With 92 million people, Egypt has problems supporting its population:

But as we can see, it does produce enough vegetables and potatoes it requires, and only really needs help with wheat, beans and animal products. For a population of only 20 million, this shortfall would be non-existent and there would be a regular surplus.

There are a few things to consider here however.

Thanks to the green revolution we've tripled our food production. Your country won't have this, so with 20 million people almost all wheat and bean production will likely have to stay in the country to feed the people. This still leaves you a surplus of vegetables, especially root crops which can be transported without too much trouble.

The floods are an important part of the agriculture, farmers wanted large floods to replenish the soil. When the floods were high there was a surplus in food, when they were low there was a famine. Will your river and delta system rely on floods or will it be a more sedate river system?

If there are floods, you'll want your country to make dams and a complex irrigation system to control the flow of water. The Aswan Dam on the Nile has many problems with silt, but it regulates the annual floods ensuring that there's always enough water for the farmers.

Without an annual flood, your country will need to use a lot of animal fertilizer and compost to keep the soil fertile and depend even more heavily on the delta. Having enough animals for fertilizer will take food away from people, depending on the animal you'll need 2.5-3.5 pounds of grain for 1 pound of meat.

One of the reasons Egypt has trouble supporting it's population is that a lot of the farmland has been urbanized. With a smaller population this isn't as big of a problem for your country. However, if all the major cities are in the delta region, even a medieval city could start cutting into it's food supply through polluting the water, using too much of it for other purposes, and of course urban sprawl.

If there are annual floods, which are controlled by dams and irrigation, it would help ensure the land stays arable for farming rather than getting turned into a city. Most cities and towns would be at the edges of the delta or on the larger and higher bits of land, while villages would be in the delta itself.

As you can see, the majority of large cities are at the start and extreme edges of the Nile delta. 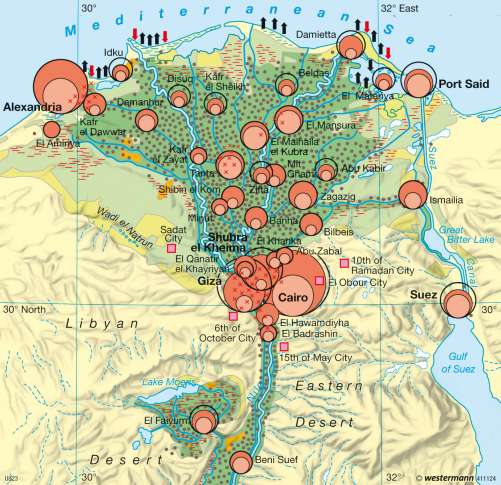 With rivers that don't have regular floods, like the Yangtze River Delta, cities and large towns are built directly on the shore of the river, reducing the arable land, and when a flood does occur it's typically very devastating.

So your country can export food, likely in large quantities, but it's not a simple matter of providing enough land, how it's used and nourished is also critical.

No, but not because there wouldn't be enough food.

Ancient Egypt may serve as a model of a large river delta in desert climate feeding a country's population. There are various estimates of its population, but the most generous is 7.5 million. Assuming that in our case the delta is bigger, and farmers have better crops than ancient Egyptians had, it's perfectly imaginable that a pre-industrial delta can feed 20 million.

But the main problem will be logistics. The population is not residing in or around the delta, it is spread around the continent. We would need large amounts of cargo to travel in excess of 1000 km on a regular basis. This was unheard of in the ancient/medieval world. Egypt could ferry grain up and down the Nile, but not much on the roads. Rome had solved the problem of feeding the capital (1+ million population), but the distances were much shorter. China had most of its population settled around fertile rivers.

Not to mention that those were problems solved domestically, and these countries had decades or centuries to work them out before they seen their population rise. Massive trade of goods across multiple borders is almost impossible to arrange. If a war breaks out in one country, all the countries on the other side of the delta will starve. Even in peacetime, the "upstream" country would impose tariffs, which would normally make trade profitable only for valuable goods. And even without tariffs, cost of shipping goods for 1000+ km in a wagon would make the food very expensive - it will cost more to ship than to raise and harvest. Draft animals need to eat too. It's a problem similar to rocketry - in order to send a small probe to space, we need to start with a much large amount of fuel on the launching pad.

However, if your large river with its tributaries cover much of the continent, the problem becomes simpler, because you don't need to deal with roads and draft animals. Still, for a sizeable ancient/medieval country, getting most of its food via trade would be unprecedented.

P.S. I think it would be realistic that this delta provides not all the food for the continent, but only the necessary extra amount for more advanced nations which have cities that can't feed themselves from neighboring lands. When trade is stable, everything is well, but when not...

We're in luck! Turns out there's plenty of precedent on Earth to support a delta this large. The largest river delta in the world is the Ganges/Brahmaputra combination delta, at $59,000 \text{ km}^2$.

"But wait!" you say. "That delta lies in Bangladesh, in a tropical climate."

Not to worry, there's more examples to be had. Specifically, one you've already researched. The Nile Delta has a land area of $12,512 \text{ km}^2$ and it exists in an arid climate.

So feel free to copy Egypt onto your world map. If anyone notices the eraser marks around the (new) name, just say it's an unusual geological feature.

If you have enough sun and a large river, with natural fertilizers in water, you only need to conduct the water to every point of the area. And yes, a delta is ideal for that.

But if the country is near the equator, you needn't delta for watering - in the equatorial climate you have heavy rains every day - but for these natural fertilizers. And having delta and daily rains you are getting a swamp. To prevent this, you need some special plants to drink and evaporate all extra water. Or you need very different physical geography due to different slant of the planet's axis, in order to make the equator dry.

Not the answer you're looking for? Browse other questions tagged food medieval-europe deserts or ask your own question.

71
How many people can you feed per square-kilometer of farmland?

17
How large would a space ship need to be to feed 10,000 people?
1
How to feed desert village
8
Rocky desert or Sand desert - Which would appear in this scenario?
0
Would this region have a desert?
0
Would agriculture be possible in desert regions before the Roman Empire age?
0
How often would an isolated village be visited?
1
Conceptual differences between nations inspired by East-West dichotomy