Attracting animals to the plant?

On the lush planet of Leena, there is a large plant called the ecotitan. The ecotitan is a carnivorous plant that can live for up to 4,000 years. When it reaches maturity, at age 500, it finds a good spot, and roots itself into the spot it chooses. It is 200 feet long, and weights about 600 tons.

It can eat prey up to the size of an African elephant, and it separates its prey into different stomachs. Once the prey is inside its stomach, it cannot escape as spikes go inward down its throat lining prevent it. The prey is crushed inside the stomach, as muscle walls, like teeth, go up and down crushing its prey.

There is only one problem. So in my story, a human gets trapped after he inadvertently walked inside it. My question is, how could the plant attract a human to it?

Edit: just assume the human is average intelligence Edit: The planet has only 50,000 humans scattered around the planet, and they don’t have agent orange. There are also some livestock animals, like cows and pigs, and crops.

That is not very difficult.

The human is taking refuge. The opening looks good enough and what is behind her is definitely bad.

The plant could lie partly underground and assemble a death trap like an antlion's, only much bigger than the insect's.

Since the plant is extremely large, the trap part could be located relatively far from other parts that are exposed above ground. 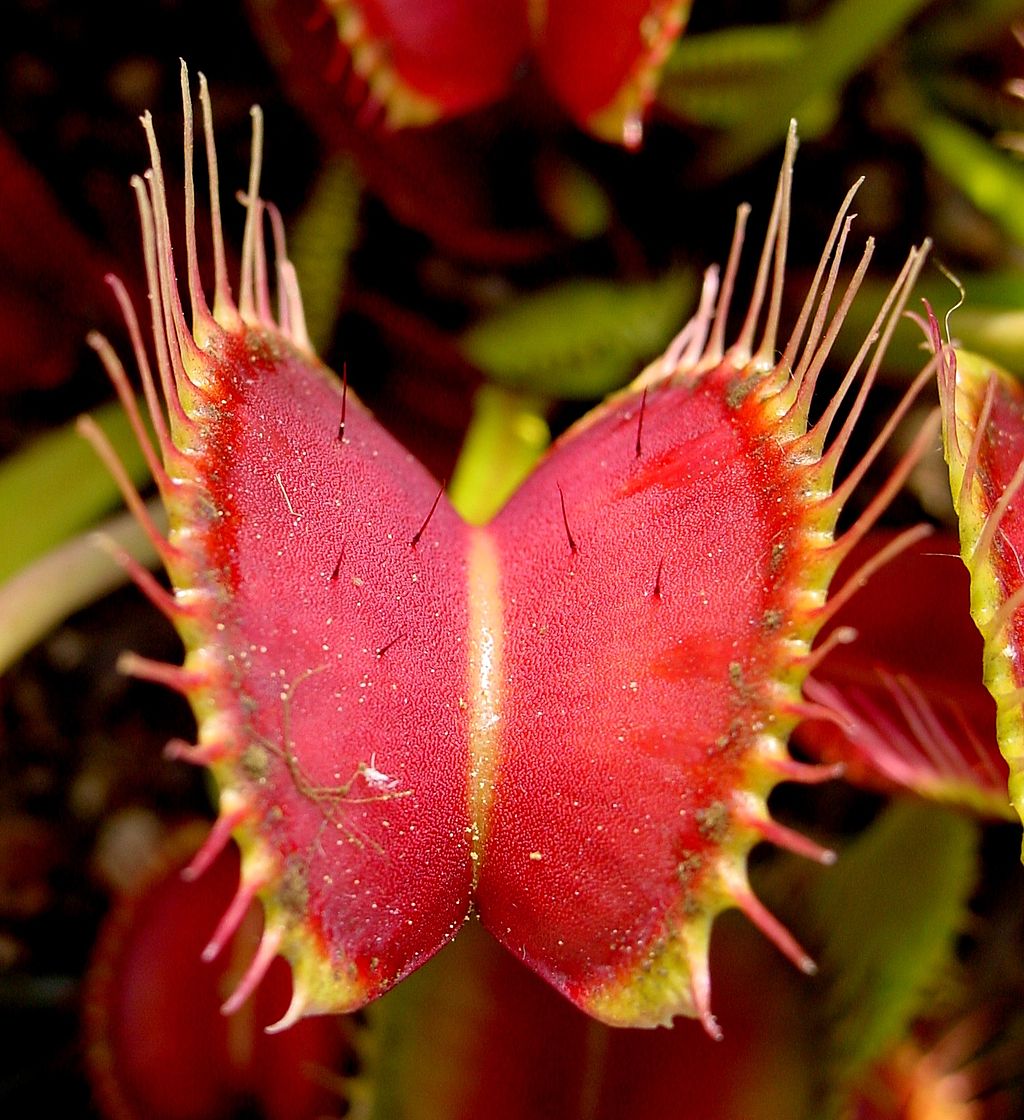 Carnivorous plants tend to be adapted to grow in places with high light where the soil is thin or poor in nutrients, especially nitrogen, such as acidic bogs and rock outcroppings.

So the soil where the your plant grows could be very nitrogen poor.

The important thing to remember is that carnivorous plants aren't eating their prey for the sake of energy.

They're eating their prey for the trace minerals and nitrates they contain. The plant doesn't need to eat in the same way that a human does. They're getting food or calories from light. A relatively small meal can assist the plant until the trace nutrients escape.

How often is has to eat is entirely a matter of how efficiently the plant can recycle nutrients after it's absorbed them.

Meanwhile it's not unusual for carnivorous plants to use bait. Things like sugary liquids or gels that the plant can produce almost for free from sunlight and air but which animals and insects need. 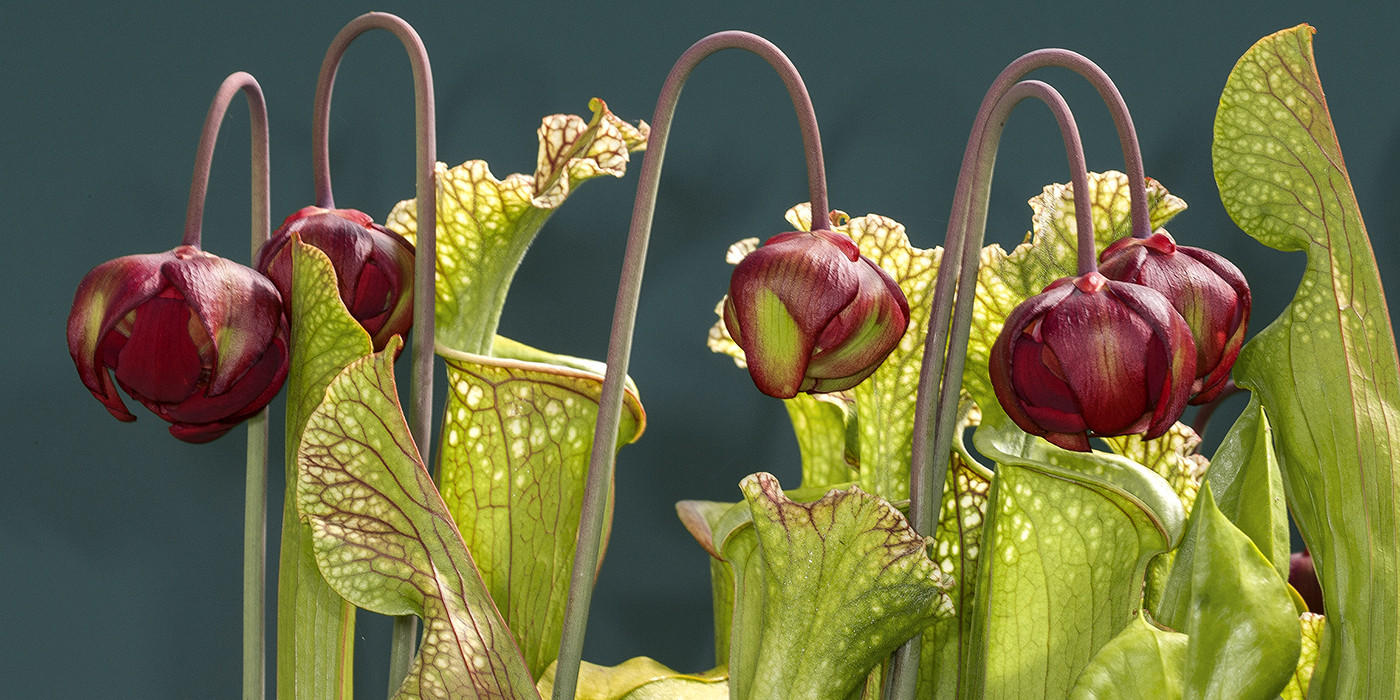 So one way would be for the plant to simply produce delicious fruit. Starving humans know it's a trap and 999 times out of a thousand they can grab that delicious fruit and they're fine. Occasionally they don't have quite the secure footing they thought they had, slip or fall and suddenly they're in the belly of the beast and on average the plant wins.

Ways to draw in extra victims could include a strong scent of ripe fruit, think the smell of bananas but mixed with other wonderful scents that might make a starving man or animal extra desperate to get to the food, to take that little extra risk and lean a little farther out.

A plant that eats animals should probably not eat animals that know how to make fire, machetes, and Agent Orange. That would guarantee the destruction of the entire species.

You might be better off having the plant provide a benefit for humans.

Your character would be accidentally eaten by the plant during a late night alcohol induced aphrodisiac fruit hunt.

A way to look at how this plant can attract animals, is to see how it fits in an ecosystem. Plants (and animals) are interconnected... so the way it attracts food could possibly lure a human, as well. But you have to think, if the plant is aware of the threat of humans... then they would also have to adapt to that as well. So then the issue of survival is tied in with this question (I would think it's implied, but then again it may be irrelevant because you didn't specify how many humans live on this planet... but for sake of the answer, let's just say it's well inhabited by humans).

Best way for this "plant" to survive is to be adapted enough to ward off the threat of an apex predator/species. If humans knew the danger of such a plant, surely the would burn them all, unless there is some reason to keep them.

I would think that this plant, as large as it is, would have to camouflage with other plants in it's habitat somehow. One way I can think of, is that it is intelligent enough to self-graph itself - break off one of it's branches and attach a different plants branch to it... eventually looking similar to the one's around it.

You didn't specify what kind of plant this is, but let's just say it's a tree just because of it's size. If you are in Asia, you'll notice large trees have shrines around them, and have some kind of "holy wrap" around them (forgive me I can't think of the word for it off hand). But I've heard the reason for this is that it is a house for spirits. This could be one reason why people won't try to irradiate this carnivorous plant. Perhaps there are cults that worship it... or give sacrifices to it.

What better way to attract prey then produce some succulent sweet tasting fruit? Even better if it looks similar to other plants that are not carnivorous... which would explain a human inadvertently getting eaten by one. Can also explain how it tricks other animals, like an elephant.

I didn't see the comment before that it's a vine. Graphing is more for trees, but with a vine perhaps it could blend in with plants/vegetables... like a kind of giant pumpkin or cucumber! Still... these concepts could apply. Maybe not the spiritual association part though.

Human curiosity is enough to get kids and adults up a tree before they consider the trip back down. To attract a human consider a plant in real life that uses scent to attract bugs and whose size was enough to have it added to several botanical gardens called the giant corpse flower. Though this flower uses the scent of rotting flesh, yours might use a pheromone that draws humans the same way the smell of fried chicken or some other cooking food pulls people to a kitchen.

15
How to colonize this planet?

11
Pack animals for forests
29
Asymmetrical animals
11
Designing a carnivorous plant
4
Parasitic plant concept/other parasite
3
Plant-Animal reproduction
9
What is a plausible reason why the creature keeps its victims alive in this stomach?
5
Seasonal Shade-Plant
11
Plant that transforms into a conscious animal