Thanks in advance for any input you can provide!

I have a moon called Vieneo http://www.risetvp.com/Vieneo which has some geological modelling of faults and epicenters over some range of time: 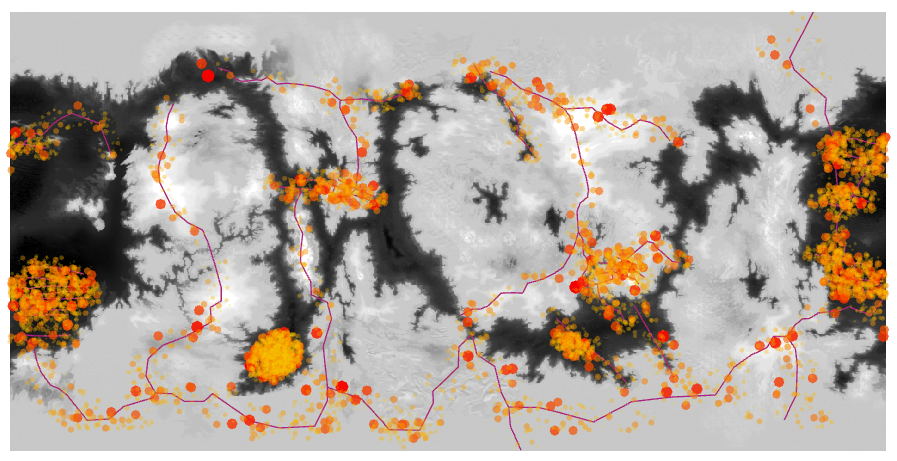 What we are trying to determine is what affects the theoretical maximum energy release these epicenters represent. For example, the Richter-scale goes to 10.0 but largest value we have seen on Earth is 9.5. Based on size, density, composition, hydrology, etc... what would would you expect the maximum Vieneo quake to be on the Richter-scale?

The maximum size of a quake is determined by the strength of the rocks making up the tectonic plates. The closest figure you have relating to that is perhaps the density. However, you need to know the density of the planet crust, not the average density of the planet. For instance, you could have lower density (correlating to lower strength) crust than Earth, but a larger iron core and end up with a higher average density.

According to Steven Johnson, a professor of geology, quoted in this article:

"Earthquakes occur when rocks break in response to a buildup of stress," he said. "Imagine taking a long, skinny icicle and you start trying to bend it until it breaks. You will not have to expend too much energy before the icicle breaks, because the ice is fairly brittle and 'weak.' But if you took a similarly shaped wooden stick, it would take you considerably more effort to break the stick. In other words, the earthquake you produced by breaking the stick is greater than the one produced by breaking the icicle."

In the end, we don't even know how to reliably predict the maximum size of an Earthquake from the fault lines we study on Earth, let alone a fictional planet. For the same level of tectonic activity, the maximum Vieneoquake could be 11 or 12 on the Richter scale (10 to 100 times bigger, 30-1000 times more energy release), but they'd happen less often. Or it could be much lower and happen more frequently. It all depends on the rock strength for maximum size and tectonic activity for frequency. That is, rock strength determines maximum energy storage and tectonic activity determines the energy input rate.

In order to get a big earthquake, you must move a large fault plane. On Earth, the biggest earthquakes happen in Subduction Zones where you get shallow-angle thrust faults; these can have moving surfaces measuring hundreds of kilometers to a side. The energy release is proportional to the area moving and the distance moved - but as a bigger fault area can take more strain before moving, the distance moved is proportional to the fault area. Overall, then the earthquake energy rises as the cube of the fault length. (See eqn 15)

SO, what does this mean for your planet? Assuming similar composition to Earth, the factor is actually going to be the presence of subduction zones, and/or the geothermal gradient. The reason being that on Earth, subduction zones give anomalously large earthquakes, dwarfing any others by at least an order of magnitude. If your planet has subduction, then that's where the biggest ones will be.

Outside of that, the key is the geothermal gradient. Earthquakes can only happen in brittle rocks; and at a certain temperature, rocks become sufficiently ductile that faults move by a aseismic slip. On earth, this limits the size of earthquakes by limiting their vertical rupture length - so the San Andreas fault cannot generate earthquakes greater than magnitude 8, for instance.

Your fictional planet is smaller than Earth, and therefore it might have lower internal heat generation and a lower thermal gradient. This in turn would allow for larger fault depths and therefore bigger, but less frequent Earthquakes. Perhaps up to magnitude 9 on a strike-slip fault like San Andreas, or magnitude 7 or so in an area of extension like the basin and range province. The increased density (how?) would probably drive tectonics faster.

So, overall, assuming earth like composition (in the surface few hundred km at least), les frequent Earthquakes of a greater magnitude than Earth. Add 1-2 richter numbers to the ones you'd get in a similar tectonic setting.

Not the answer you're looking for? Browse other questions tagged moons geology earthquake or ask your own question.

4
RFP: Put me on the moon
12
How to end the world by earthquake?
4
How could a triggered earthquake be stopped?
22
Can a rogue nation trigger an earthquake?
9
To make a blue moon, what element does it need?
3
If a world had a massive single giant world tree could it stop an earthquake?
5
Appropriate Material for a Red Moon
9
How can an Earth-like moon meet these angular diameter conditions?
21
Could earthquake cancellation work?