Could there be a way to explain a sound wave (produced by a device) that can control people's actions?

This isn't the same question as the one about a Sound Gun, although it could be viewed as a weapon, for sure (because controlling someone could be a form of weaponization depending on the action). What I'm asking is if there's a way to explain a sound or frequency that can control a person's actions but produced by a device, not a person. Or would there have to be some kind of implant for that to happen, such as what is portrayed in the Divergent movie?

It could be a specific frequency for a specific action, or a frequency which makes one susceptible to be controlled somehow. (to be put in a state of hypnosis maybe?)

I would also not want to use magic as an explanation.

EDIT: The controlled action is against the subject's will.

Have you ever been doing something and had your mother shout, "STOP!" It definitely controlled your actions, didn't it?

There is no known way of controlling the brains of others with any regularity, though the famous fungus O. unilateralis did manage to control the mind of an ant. But if you really think about it, controlling someone's actions through sound is no different than controlling them through absolutely any other sensory mechanism.

It is known that some infrasonic frequencies (very low frequencies, like <32Hz) can cause agitation in people. It can be quite an uncomfortable feeling. This could be used by a skilled manipulator to put people into a mindset which is easier to manipulate. I'd still say it's the manipulator causing the effect, rather than the sound, but that might still meet your needs.

Of course, the brain is an incredibly complicated system. Who knows what sorts of surprises might happen with precisely the exact right series of loud sounds. The idea is akin to that from Snow Crash, by Neil Stephenson. The only issue is that there's no biological evidence to support it. But the brain is complex enough, that maybe there's something that we've simply never experienced in 100,000 years of evolution which takes out our minds. It would be akin to believing in Pai Mei's Five Point Palm Exploding Heart Technique, which we can't disprove, but we can shake our heads at disapprovingly.

Of course, if such a technique worked, you could be 100% certain that it would have been weaponized and we'd have seen it deployed by now. So that should give you a great deal of confidence that it just doesn't work. On the other hand, maybe it did work. Maybe it's working right now. Maybe it's working on us, right, now, like a low level perception filter, convincing us that it's impossible (well, convincing me, mostly). This storyline was explored in Dr. Who with The Silence. Fortunately, I was able to type all of that, and I have yet to observe any tally marks on my arms, so I think we're okay... for now

A fun philosophical question would be, if you are controlling their minds, and they do something, can they do something they don't want to do? Or, by definition, are they doing exactly what their brain wants to do?

there's a way to explain a sound or frequency that can control a person's actions but produced by a device, not a person. [...] The controlled action is against the subject's will. 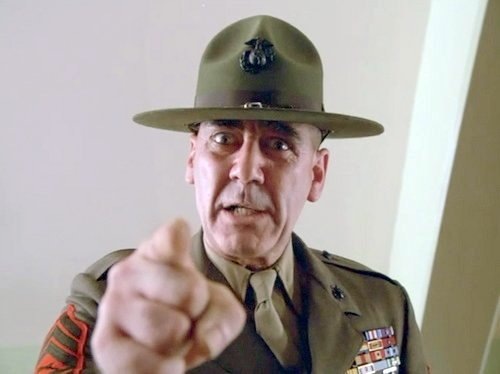 I am fairly sure none of the trainees was doing anything of what he was shout out of his own gracious will...

We already have such instrument and it is called Voice of the authority.

Without going into the fiction realm, think of all the famous commanders in our history: Leonidas, Alexander the Great to end up to Hitler. They were all extremely able to use their voice to give extremely inspirational speeches.

One method for creating subliminal auditory stimuli is called masking. This method involves hiding the target auditory stimulus in some way. Auditory subliminal stimuli are shown to have some effect on the participant, but not a large one.[23] For example, one study used other speechlike sounds to cover up the target words.[23] The study found evidence of priming in the absence of awareness of the stimuli. But the effects of these subliminal stimuli were only seen in one of the outcome measures of priming, while the effects of conscious stimuli were seen in multiple outcome measures.[23] However, the empirical evidence for the assumption of an impact of auditory subliminal stimuli on human behavior remains weak: In an experimental study on the influence of subliminal target words (embedded into a music track) on choice behavior for a drink,[24] authors found no evidence for a manipulative effect.

Even though it barely works a little, for a short time IRL, having a Mad Scientist or Government R&D Lab discover a frequency where it does work is plausible in fiction.

Then, via a Vast Conspiracy Of The Powers That Be, have it overlay YT videos, American Idol, Snapchat conversations, etc.

You won't get robotic control, but it would work for maintaining social control.

Not the answer you're looking for? Browse other questions tagged weapons brain mind-control or ask your own question.

19
How can I explain mind control without using magic?
3
Can a weapon that uses plastic materials be mass-produced with WW2-ish technology?
3
It there any conceivable way nanomachines could turn a brain into a semi-organic grey goo, preserving the individual's consciousness?
1
Is there a scientific way to make a metal that can pass through other metals?