Could a non-newtonian armor coupled with a dampening fabric stop bullets but not melee weapons and arrows/bolts? [duplicate]

In a futuristic setting, nations have invented a way to create armor just a bit heavier than cloth. This would be worn like chainmail and would be available widely. I am looking for a way to make this somewhat realistic and avoid deus ex machina as much as possible.

My hypothesis would be that scientists have a created a non-newtonian fluid or jelly, that "hardens" very well at the energy spectrum of typical bullets. However, it does not "harden" enough for lower energies (melee weapons, arrows, bolts,...) or extremely high energies (railguns, coilguns,..).

Keep in mind, this is the future (we are talking centuries ahead, possibly millennia). Therefore, these melee weapons can be far from primitive (rocket hammers, chainsaw blades,...) but we are focussing on mechanical melee weapons here. There are such weapons like light sabres (based either on plasma or laser technologies).

Here's your problem: Whether or not it's possible to design armor that can resist bullets but not melee weapons or archaic ranged weapons, bullets that mimic the impact properties of bolts, arrows or darts already exist. For example, saboted darts that can be fired out of standard firearms have been around since the 1960s:

Now, according to this article, a 500 grain (unit of mass) arrow traveling at 220 feet per second is suitable for hunting, and the author states is both heavier and slower than most conventional broadhead arrows. If the objective is for armor to resist light, fast projectiles but not heavy, slow ones, this is probably your perfect weapon. The 10gr dart pictured above is not equivalent.

But let's consider shotguns. A typical shotgun load is 1-1/8oz of buckshot (492 grains) or a 1oz slug (438 grains). So, a typical shotgun load already delivers the same mass as the entire arrow being recommended above, it just has a suboptimal projectile type. The flechette design is not optimal here, since it has very low mass, but a pointed 1oz slug would give weight and cross-sectional area comparable to a broadhead arrow. The main difference would be that instead of a measly 220fps, it flies at around 1800fps.

If the armor has properties such that a heavy, pointed, slow-moving projectile can penetrate it, an equally heavy, equally pointed, much faster moving projectile is going to absolutely ruin your day. And this is something that can be fired out of any off-the-shelf smoothbore shotgun with no redesign needed.

If you want to get more specialized and purpose-built, let me introduce you to the APS Underwater Rifle:

This is, for all intents and purposes, a 20th-century dart thrower.

As far as ballistics are concerned, it doesn't matter whether a projectile is being propelled by a human-powered system or by chemical means. We typically use blunt, lightweight, very fast projectiles in firearms because those are ballistically superior for our common purposes, not because firearms cannot effectively propel pointed, heavy, less-fast ones. If there exists a human-powered system that can pierce a given piece of armor, it's guaranteed that you can design a chemical-powered system that can do the same more effectively and from longer range.

If a spear will work, so will a speargun- so who's going to carry a spear?

Would it be plausible if this armor was made of a non-newtonian fluid that reacts well to bullets (up to a certain thershold), coupled with a dampening fabric to absorb most of the impact of the bullet?

You can bet that researchers have thought the same thing, and have tried various formulas, and -- given that the impact plates which get put behind Kevlar vests are ceramic instead of a n-N fluid -- have failed to find one that works. (Remember that these vests must be thin enough to allow mobility.)

Spread out, not defeat.

but much less against melee weapons and heavier projectiles like bolts, arrows or darts of any sort.

Pointy objects pierce the Kevlar and whatever is holding the n-N fluid in place.

Remember also that armor-piercing rounds are:

And bolt- and arrow-tips, and darts are... small, (relatively) fast, and pointy.

Bottom line: your story scientists will have to develop a n-N fluid.

Your bigger problem is to come up with a scenario/setting where melee isn't even a consideration, but is able to become a consideration very quickly. Armormakers are going to protect against the threats they see as likely, and unless there's some onus against people being within melee range of each other or lack of appropriate melee armor material, they're going to give the n-n armor a backing to prevent melee stuff.

Enough of the science is there to project that we will be able to produce a fluid that will effectively split and roll an impact around the torso. You just need the proper setting to allow that to be the only consideration.

The armour would work in such way that the more force is pushed against it the more it can withstand.

So as in some Sci-Fi - the force field is using projectile force to sustain itself. When you shot plasma and laser the force is working. When you lightly push some small object the field don't have enough force to stop it.

Second melee weapons. You mention blunt ones. Which are not made for penetrating any armour. Just to crush everything that is beneath it. So armour would not be pierced (main purpose of projectiles).

Then you have slash/thrust/pierce melee weapons. Only in thrust/pierce the force is applied 90 degrees against armour. In slashing the force goes over an angle so the weapon would need to be long enough to cut through armour and then go against wearer. Kind of like cutting cheeses with short knife.

BUT - the spear/rapier could have such small point of impact that it would fit between molecules of the armour fluid. So you don't push any stress on the material itself just push it away.

To address any future ideas - yes the bullet would be stopped. Yes, the XVI century cannonball would be stopped too but the amount of force it would apply on the wearer would crush his bones and internal organs.

One of the issues with this question is the rather ridiculous overmatch that firearms provide. Similar questions in Worldbuilding reveal that arrows shot by longbows can generate up to 100J of impact energy, and steel crossbows (drawn by some sort of spanning mechanism) can deliver 200J. An Arquebus from the 1400's can deliver 1000J of energy, an order of magnitude difference.

While humans have not become much stronger since the 1400's, firearms technology has advanced by leaps and bounds.

From the Atomic Rockets "Boom Table"(First column =energy in Joules):

So except for the smallest handguns, the energy is going to be more than a human being can deliver in a hand held melee weapon, and it is being delivered in a smaller point and at a faster impulse time than a human can deliver the energy. To put it another way, you can certainly kill someone by shooting them in the head with a .22, but punching them in the head is far more likely to result in a set of broken knuckles for you.

So the short answer is that any effective armour against small arms is by default protection against virtually any muscle powered or hand held weapon as well. And since the people who make armour are not stupid, if there is a threat of things like stabbing weapons or icepicks being used against the target, they will weave or impregnate or add some sort of stab resistant layer. Even things like "Strike plates" over the most vulnerable part of the body can serve double duty, a metal or ceramic plate proof against the energy of a 7.62 X 51 NATO round can certainly stop a knife blade rather easily.

The only way to get around this is to look at real history. As armour became perfected towards the end of the 1400's ("Proof" armour is proof against gunshots, you can often see the dent in museum pieces where armours "proved" their product with a pistol or arquebus), and fluted or curved pieces deflected strikes by bladed or smashing weapons away from the user; long, narrow stabbing swords were developed to stab through the joints or gaps in armour. 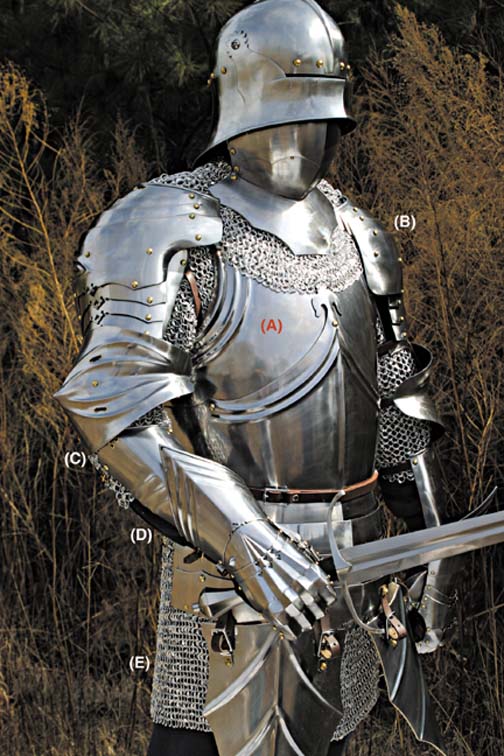 If this protection needs unarmored spaces at the joints to allow movement, or is "quilted" to prevent the fluid from leaking or draining to the bottom of the armour, then certain areas may exist where a very thin, extremely stiff, pointed blade might like an "Estoc" might work. (In the real world they evolved into rapiers and short swords)

Estoc. These are actually quite long and heavy

So except for particular situations (like an ambush), or living in a setting where carrying swords is acceptable civilian dress, people in armour are almost certainly going to be protected against both melee weapons and firearms.Modern police riot gear should be a positive demonstration of that. 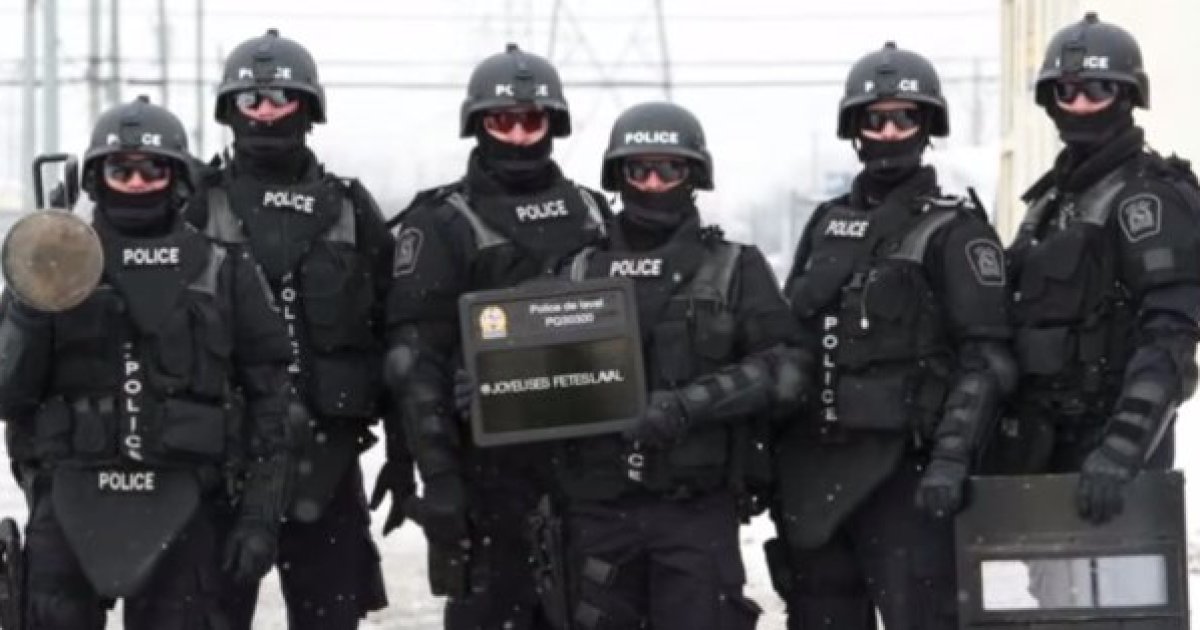 Come at me bro

And Modern soldiers take this up to "11" 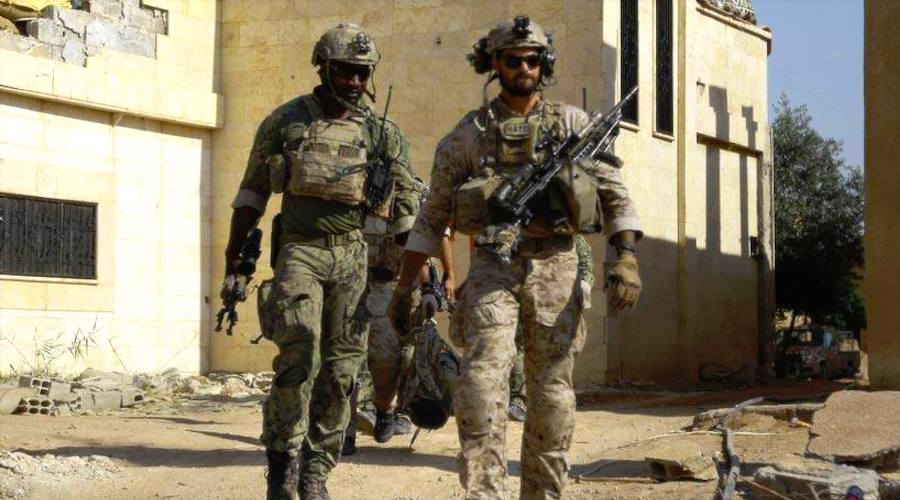 Not the answer you're looking for? Browse other questions tagged weapons armors melee .

14
Could the development of a body armour that completely stops any small arms fire make a civilization go back to medieval-style combat?
41
Can guns be rendered unusable by changing the atmosphere?

36
What would be the most effective melee weapon against heavily armored opponent?
12
Modern Body Armor for Medieval Style Weapons
14
Could the development of a body armour that completely stops any small arms fire make a civilization go back to medieval-style combat?
25
How do I scientifically explain a specific type of wood piercing through armor when not even bullets can?
78
What (modern) weapons could be used to destroy skeletal enemies as completely as possible?
8
Could a mass-proportional physical speed limit on projectiles "nerf" guns but not ruin archery?
5
Greatbow Utility
5
What weapon types would be most prominent in my gunless sci-fi world?
5
Is ice armor better than nothing in medieval battle or is it just weighing you down?