This version would orbit the sun at 1 AU (at the same distance as earth). It would be oriented transversely ("sideways") relative to the sun, as seen in the diagram, with large mirrors used to reflect light through transparent windows at each end. (Assume windows are approximately 50% of the diameter of the cylinder itself.) 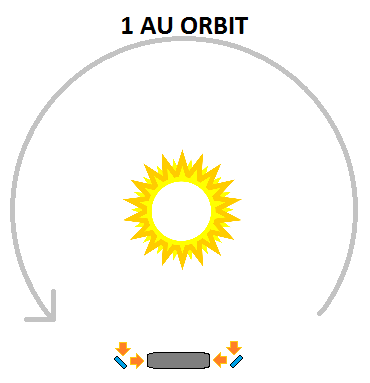 Is it possible to calculate how far light in the visible portion of the spectrum would penetrate into the cylinder? Would it be dim in the center? Or is it too difficult to tell due to the large number of variables? I'm trying to understand if a setup such as this would run into any issues with lighting the interior.

I should maybe point out that the atmosphere inside the cylinder hugs the walls, so that the axial center is nearly a vacuum. That should help light penetration because there is no air attenuation there.

/ I should maybe point out that the atmosphere inside the cylinder hugs the walls, so that the axial center is nearly a vacuum. That should help light penetration because there is no air attenuation there./

That would help the light penetrate. But what would then illuminate your walls / atmosphere / inhabited regions? How does the sunlight move laterally? Why would the light not pass through the vacuum and out the other side?

You might want something in the center that can scatter the light and so indirectly light your peripheral regions. Could particulate matter hang in the zero-gravity center? Maybe you could spray water up there. It would scatter the light, and gradually fall back to the exterior as a gentle rain. It would be like living in Portland, OR.

Or maybe one glob of shimmering water in the very center. The sunlight from either direction would hit the water and be refracted / reflected away. You would have a water-sun.

The problem of illumination inside a McKendree cylinder was dealt in its original proposal. This does mean this question can be set aside. Rather than place windows at either end and be concerned about the penetration of light, build them as they were originally intended.

As originally proposed, the McKendree cylinder is simply a scaled-up version of the O'Neill cylinder. Like the O'Neill cylinder, McKendree proposed dedicating half of the surface of the colony to windows, allowing direct illumination of the interior.1 The habitat would be composed of a pair of counter-rotating cylinders which would function like momentum wheels to control the habitat's orientation.

Not the answer you're looking for? Browse other questions tagged space-colonization space-constructs or ask your own question.

12
Would Rayleigh scattering (blue skies) be noticeable in an O'Neill cylinder?
6
How would an advanced civilization on a space station not be able to explore the planet they orbit without significant time between each expedition?
2
How much sunlight can I get into my O'Neill cylinder and how much light needs to be artificial?
2
How massive can a structure get on the inside of a Mckendree cylinder?
11
How much of the sun's light would have to be blocked for the Earth to become uninhabitable?