Does matter, physical things that can be observed and measured by our five senses, have wavelength (or phase) the way that radio waves do, and if so can that be manipulated somehow? Let me explain...

I have a story in which a scientist is trying to transform an immaterial being into a material being; material in that it should become composed of matter the same way we are, solid and can interact with all five of our senses, instead of just one or two of them. That's why I use radio waves as an analogy, because we can hear it by use of radio, but we can't touch, feel or smell it.

At first the scientist encounters this being only through sight and sound, and he thinks it's a ghost. But when he sees that the being is trying to communicate with him he realizes that it's not a ghost, but rather someone from another dimension or reality(?).

He might be able to get help from the being in completing this task (though I don't know what form that would take).

Is there anything in science that suggests some immaterial form of matter being transformed into another kind of more material matter?

A) Plausible sounding handwavium allowed, but no magic please. By that I mean no magical spells like what would come from a fantasy story. Let's try to keep it science-ish.

B) Apparently we have more than five senses. 6, 7, some say as many as 21! I missed the memo. Apologies.

This means that the wavelength a macroscopic object is so extremely tiny that it could never be measured. However very small objects like electrons do have significantly large wavelengths.

But this is not a way to convert a material object into "immaterial" It just says that all object have both particle (material) and wave (immaterial) nature at the same time. You would have to wave your hands very fast to use the wave-particle duality (but you wouldn't be the first writer to play fast and loose with quantum mechanics)

Is there anything in science that suggests some immaterial form of matter being transformed into another kind of more material matter?

There is a concept known as pair-production: If a photon of light has enough energy, it can change into an "electron-positron" pair (or even something more massive, like a muon-antimuon or proton-antiproton pair). The photon has to be very energetic, so it would be described as a gamma ray, and the photon needs to pass close to an atomic nucleus (to accept some of the recoil momentum) Of course the positron doesn't last long, it interacts with another electron and annihilates giving off a pair of gamma rays.

The real physics is not much like your dimensional ghost!

If we're looking for suspension of disbelief, not real physics, then...

How important is the strict definition of "immaterial" to you?

Water vapor and steam are immaterial in that you can walk right through them. They become material by cooling them down, first to a liquid, then to a solid.

Something a bit more immaterial than water vapor is a gas, like our atmosphere. You can walk right through it. Pressurizing a gas turns it into a liquid first, a solid second.

Yet more immaterial are various forms of radiation. But now we're not starting with a physical object. We're starting with an energy object. Star Trek solved this problem with matter transporters that shifted physical matter to energy then back again.

To suggest that our understanding of matter teleportation is growing is a bit like saying we know what the inside of a house looks like when we're standing outside the city boundary. Never mind the philisophical implications of what amounts to copying the original, sending the pattern somewhere, and 3-D printing it out again, destroying the original so that nobody gets confused.

And by "sinister" I'm including James K's incredible answer, which I upvoted, the result of which could be two beings, one made up of electrons/protons, the other positrons/antiprotons (we'll ignore where the neutrons came from) and one of them's gotta go. Heaven help us if they shake hands.

If I can represent my sensory apparatus and intentions via radiowaves, I can interact with machines that receive radiowaves. I can remotely pilot a drone. In some respects, I become the drone. I can fly circles around someone, drop flowers, even speak to people through the speakers. I am not in the drone, but I am interacting via radio waves from some distance.

So too your creature. It can interact with our world in some respect. Have there be a puppet form which is controlled via mechanisms the being can manipulate. The puppet would represent the being for purposes of interacting with corporeal creatures.

There is a character like this in the Hellboy comics; Johann Kraus was astrally projecting himself when his body was destroyed. Now his astral form resides in a special purpose built suit. 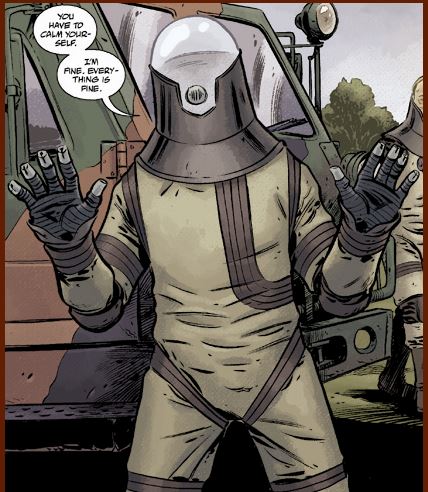 His ectoplasmic form having survived his body's incineration, and knowing he would soon dissipate without a physical body, Kraus sought the best paranormal minds on the planet for help: the B.P.R.D.. At first, his ectoplasmic form was contained within a transparent tank apparatus originally developed by the B.P.R.D. for other purposes. Eventually the technology was scaled down into a more specialized containment suit. Kate Corrigan had said of Kraus that, "He's not dead. He just doesn't have a body anymore."

Since your scientist can hear it and see it, it means this being is made of something which can interact with electromagnetic waves and gaseous matter.

This rules out dark matter and, far from being immaterial, simply points to some weird conventional substance.

With conventional matter there is no much room for changing: adding or removing protons to the nuclei drastically changes the type of substance, leading to destruction of the being.

What the scientist can do is simple research some kind of paint which he can spray on the being to make it more visible and maybe tangible, as the thin layer of paint would enable some more interaction.

Though I don't know if "let me spray paint you" would be welcome by the being...

but rather someone from another dimension or reality(?).

In that case, you bring the being into this dimension.

In all stories where this happens, there is a "rift" in the dimensions where things "leak through". Your protagonist must find that rift/tear to allow the other being come through and become solid.

Of course, if one being comes through, others can, too, so he'll have to seal the rift afterwards And figure out how to open it and shove the tridimensional being back if it turns out to be Bad.

Not the answer you're looking for? Browse other questions tagged physics xenobiology communication energy-beings or ask your own question.

7
Could negative matter/energy exist in a stable state?
4
How do you communicate with dark matter beings?
9
Figuring out the math for the Sphere of Meteoric Conversion
4
Is it feasible to use light as a transmission vehicle?
2
How would plasma-based lifeforms interact with physical matter?
10
How would the ancient aliens leave an instruction manual