Lizard-like creatures “swimming” through the sand?

I have been designing a whole solar system for my story, and I am finally able to come down to creatures on the planets. I have already asked a question about one of the planets, Veynerth, so there is more information and updated changes to the planet there. It is a deserty planet for the most part, but there's regions where there's high volcanic activity, and it actually gets very cold due to the ashes and such clouding up the atmosphere and blocking out the sun. Anyway, I wanted to create a creature that lives in the desert parts, and what I have so far is that it's a giant lizard-like creature that burrows into the sand and essentially "swims" in it, finding its prey based on the vibrations on the surface. I don't know how well that would work because I think that it having a rough, scaly body would make it hard to swim in the sand. I wanted to know if there was anything I could change about the design to make it more plausible, yet still retain that lizard-like appearance.

Extra details: They have secondary clear eyelids to protect their eyes from the sand. They don't need a whole lot of water to exist so they can spend weeks underneath the sand waiting for prey. They have trouble walking on land because they evolved to dig/swim through the sand. This makes them very slow and not so menacing if you could ever isolate one on solid ground.

Please let me know if you need me to add more details.

Apologies for my lack of artistic ability, but here's what I have sketches for what it would look like. (https://i.stack.imgur.com/sPNzN.jpg)

I think the creature you're designing already exists. It's a lizard called the sandfish: 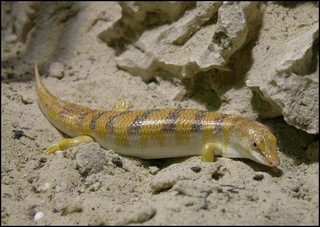 This creature spends most of its time under sand and has developed a special respiratory system to keep sand out of its lungs:

[Scientists] found the lizards breathe out with about 60% more intensity inside their sandy burrows than when they are aboveground, which might allow them to expel sand particles from their nostrils. The scientists also estimated a 70% drop in the speed of inhaled air when it hits the widest section of the lizard’s respiratory tract. This likely means that as the air slows down, sand particles fall and get trapped in mucus and cilia that line the section, the scientists report today in the Journal of Experimental Biology. From there, some particles are blown out during exhalation and others are swallowed, after which they pass through the digestive tract and out of the body.
How the sandfish lizard stays sand-free

This video shows what motions it makes to propel itself through the sand.

Their body would require tremendous force to move through sand relatively quickly and it should be able to withstand the pressure of all that mass of sand above them.

Other than that, I do not doubt on the ability of their scales to resist sand "grind" while moving. By the way, some reptiles already have a second eyelid.

I think they would move more easily if they dug with their frontal claws rather than "swimming".

I'm visualising a sort of torsioning reptile, that would move quickly through the sand in a fast spinning motion, like a screw. It would need tough scales and a fairly streamlined body for that.

That or you could refer to the answers above and have it dig through the sand rather than really 'swim'.

Not the answer you're looking for? Browse other questions tagged biology planets creature-design science-fiction or ask your own question.

4
Can a “dune” worm actually swim in sand?
2
Is it feasible for a Dune-style sand worm to have silica scales?