Could an organism see in infrared light as well as normal light, using its brain to process what it sees into a single image?

Where is the information processed?

The images we see are upside down, our brain just flips them. To support this statement, George M. Stratton wore reversing goggles for eight days, after five his vision flipped right side up again, Source 1 and Source 2. It is believed that as babies we develop this ability to flip our originally perceived images, even with our relatively small visual cortex's. Along with this, humans form a single composite image from what each eye perceives in our cortex, this allows us to sense depth.

Animals that can sense NIR:

There are organisms that exist on earth which sense infrared, although they do so without the use of 'eyes' in the sense that you might imagine. They employ the use of various types of pit organs. Snakes in particular use these to sense the heat of their prey. Electrical signals associated with this process are sent to the somatosensory system demonstrated as a homunculus here, this part of the brain is associated with pain, touch and temperature etc. This does not process visual information, that's the job of the visual cortex.

By this we may determine that a snake being able to 'see' infrared alongside normal visible light is more akin to a human sensing heat from their hands, an ability separate from the processing in the visual cortex. Essentially what this means is that no organism on earth can sense infrared through the use of photons, although there is one exception.

The only animal on earth that can see NIR through the use of photons is the mantis shrimp, it sees UV, RGB and NIR and a result can't differentiate between the colours as well. No other animal can do this because their photoreceptors absorb only red, green, blue (and sometimes UV, such as in bees). Studies such as this 'have not received a satisfactory physical explanation', as simply finding a way for the red photoreceptors of the eye so absorb a wavelength of 700-1000 will result in the colour subsequently being perceived as another shade of red. Certain marine animals are said to be able to see in infrared light because of the A2 protein, this may be true, however, since their eyes contain only Red, Green and Blue receptors, IR being slightly above red, they perceive IR as a different shade of red.

This video gives a great explanation of how we perceive colours through cones and rods in our retinas. It details why we can't see different ranges of wavelengths.

Infrared is a just another colour spectrum, yet one we can not comprehend, it's essentially like a person who sees in greyscale trying to see colour. Cameras can however, pick up NIR, it's just that we only perceive it as type of greyscale. Since NIR is essentially heat energy yet we observe it on a greyscale we can add filters that range from one end to the other on a colour palette. An example of which, would be the well known Ironbow palette 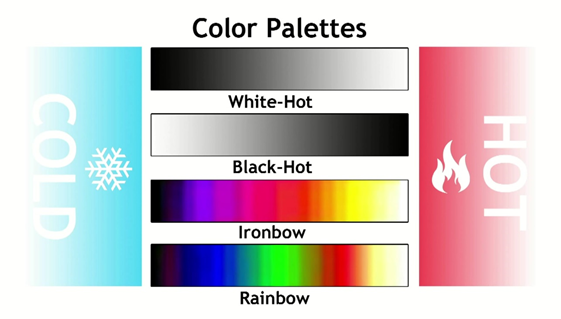 This wavelength chart will make it easier to understand. We can only see up to a wavelength of about 700, due to our 3 cones being within about 400-700, infrared on the other hand spans from about 750 onward.

How a compound image using NIR and RGB works:

In this example information from the visual light spectrum (red, green, blue) is taken and converted into a luminance-chrominance colour encoding. The near infrared (NIV) (700-1100) however is derived from the same camera that has had its NIR filter removed, resulting in an image that appears to us in greyscale. The resulting image then provides us with a luminance channel, with more detail to contrast and sharpness.

The luminance channel of the RGB is replaced with that of the NIR image, resulting in a cross between the two. The first images are RGB, the second are NIR and the final is the hybrid. As you can clearly see when you zoom in, the final images have increased sharpness and contrast. It's easier to see in both high and low light conditions. It seems that a camera has accomplished this without the use of post photograph editing. Furthermore this abstract details a very similar process.

On top of this, infrared can see through smoke as well as other things, from this we made deduce that an organism who has employed the use of multiple wavelengths could:

Clearly there are immense benefits.

Here are some examples regarding Smoke, Clothes and Veins

As well as another example of how NIR looks in smoke:

The question is as follows:

Now I'll leave you with some interpretations of how the alien might see its world, after forming a composite in its visual cortex.

Why would receptors reacting to infrared be any different than those reacting to other wavelengths?

Some humans are color-blind. They lack one or more types of cones, meaning they don't perceive that color at all (or in some rare cases, no color at all being completely monochromatic perceiving a purely grey world). Some humans are tetrachromatic (they have 4 receptors) - most don't know because everything just looks normal to them.

There isn't anything particularly novel about being able to see infrared any more than it is that some animals can see well into the ultra-violet.

As far as having multiple eyes... we have multiple eyes right now (as do many animals, though they can be far more impressive with it). Nothing unusual about it. Many people have a dominant eye, from which their brain focuses more attention on, but most people still composite the information into a coherent perception despite multiple sensory organs.

While two pairs of eyes are clearly feasible (some spiders have eight eyes) having just more colour receptors is much more probable. It is very imaginable that usual vision is extended to near infrared (700–1500 nm wavelength). It will not extend beyond that because water becomes opaque at longer wavelength and an eye mainly filled with water will not work anymore.

There is a device called the DSNVG (Dual Sensor Night Vision Goggles) which can overlay the infrared spectrum onto night vision. I see no reason why, given the correct receptors, a biological eye would not be able to do the same. Image of a DSNVG in action: 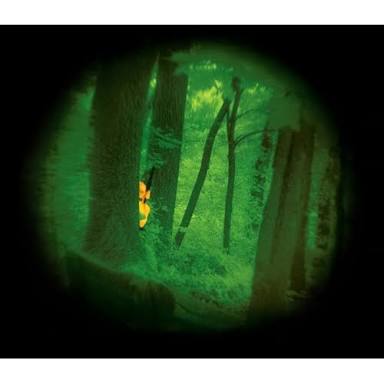 Yes. The size and shape of Neanderthal eyes implies they may have done this, and even regular humans see slightly into the infrared. We know of humans with four different photoreceptors (terachromats) and the animal kingdom has animals with everywhere from five to thirty five different receptors.

The chief problem is that there's always a trade-off. The number of photosensitive cells of a given size that you can pack onto a given area is bounded, and you need more complex processing which requires a larger visual cortex.

Neanderthals had, indeed, a substantially larger visual cortex, but reduced other parts of the brain to fit it in.

You merge several kinds of data now in your visual cortex. You have rods and cones. Rods respond just to luminance. Cones respond to different colours. You merge low res colour info with high res luminance info. You do the same thing in other senses too. Close your eyes. Touch your fingertips together behind your back. You integrated a whole bunch of positional data from the weight of your limbs.

Try this: Hold your hands about 2 inches apart. Have someone else put their hand between your hands, then you close your hands together. You have made a 'hand sandwich' It feels very odd because you are getting conflicting data. Kinaesthetic sense says your hands are separate. Touch says they are together.

Animals such as snakes that detect warm targets are using very far infrared.

An object at 30 C (bit warmer than normal skin temp) has a peak wavelength at 10 microns. Compare to 700 nm for the red end of the visible. About 14 times the wavelength.

Making a detector has issues too. Snakes make it work because they are colder than what they are looking at. This is a general problem: it's hard to make a detector when all the components are glowing in the band it's trying to detect.

That last image with the firefighter is not near-infrared. It's from a thermal imaging camera which looks at longer wavelengths than NIR, ie, what's generally considered "heat".

The difference can be approximated by noting that NIR can be treated the same as visible light, just slightly below the range that the eye can detect. Most night-vision gear that's not light-amplification, such as that used by wildlife documentaries to film animals at night, is NIR. It uses a source of light that acts exactly like a normal spotlight, but at wavelengths the animals can't see, and the camera detects the reflected light.

A Thermal imaging camera, on the other hand, detects the radiation emitted by the object itself. A wildlife documentary wouldn't need a source of (invisible to the eye) light to illuminate the animals, you'd see the heat emitted by the animals, which would contrast with the temperature of the things around it.

To put it another way, if I looked at a normal interior wall with a NIR sensor, all I'd see is the wall looking not much different than what I'd see with normal light. If I looked at it with a decent TIC, I'd be able to see subtle heat variations: where the wall studs were touching the drywall, the slight waste heat generated by the electrical lines, where pipes were carrying cold or hot water, whether vents were heating or cooling the room. A NIR-capable camera cannot do that. But, and here's the trick, it has to be warmer than the sensor: if your camera's sensor is at 50 C, it wouldn't "see" anything 50 C or colder because the camera essentially blinds itself.

tl;dr: There's not particular reason why an organism can't be sensitive to NIR wavelengths. It wouldn't be different that how some organisms can sense ultraviolet. Seeing an image like that picture of a firefighter, though? Not happening.

There is no hard dividing line between different parts of the EM spectrum, sensors can very well have an operational range that overlaps parts of different named areas, and that includes both artificial and biological sensors (of which eyes are one example, skin is another).

Of course. It's not about brain, it's about eye. They just need the right cells in their eyes to pick up both infrared and visible light.

Nature got there first

Some forms of fish such as goldfish, salmon, piranha and cichlid can see infrared light. Salmon and some other freshwater fish have an enzyme that switches their visual systems to activate infrared seeing, which helps them to navigate and hunt in murky waters.

Not the answer you're looking for? Browse other questions tagged reality-check creature-design xenobiology senses unusual-color or ask your own question.

18
Science behind a naturally invisible creature
2
The Rods and Cones on Equal Terms
8
How would we see the world if we could see polarized light?
10
Can we identify distinct “colors” beyond visible light?
8
Objects detectable only with blindsight
3
If life evolved on a planet with two suns, one emitting in the ultraviolet and one in the infrared, what light would that life evolve to see?
27
A fast aquatic predator with multiple eyes and pupils. Would these eyes be possible?
8
Anatomically Correct Color-Adjustable Eye
5
How much can I expand human color perception by adding new photoreceptors?