Is it possible a wizard with no tongue be of some use if the magic requires to say the spell out loud? [closed]

My magic requires that the wielder performs the spell by reciting out loud. What if the tongue of a wizard was cut off?

Basically you established a requirement for magic: "say something out loud"

And then you want to know what happens if someone can't fulfill this requirement: "he can't say anything out loud (at least if it's important what kind of sounds come out of his mouth)"

The only way to go around this is to find some loophole, such as using magic to create the sounds, using magic to restore the lost body part that is necessary through restorative magic, using mechanical devices or magic as a prothesis or for example by defining that the sounds are not the important part, but the way the wizard breathes in and out - it just so happens that people found a spell formula that perfectly simulates the pattern of breathing. But in the state of "not having a tongue" and "requiring a tongue" the wizard won't be able to cast any magic.

A person with no tongue can still make a lot of sounds with their mouth. Just for fun, trying speaking some words without moving your tongue. It will sound almost like a tongueless person.

For example. If the incantation for each spell is the spell's very name, a tongueless wizard would not be able to use a fireball, chain lightning, or Evan's Spiked Tentacles of Forced Intrusion. But they would probably still be able to cast heal, harm and summon (with an accent).

Also notice that in some RPG's, wizards have abilities other than casting spells. For example, they usually can identify magical items. 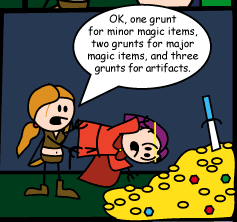 While the wizard may not be able to use the spells by himself he may as well become a teacher to other scholars of the magic arts, having aquired lots of knowledge over the past years.

If magic in your world requires any kind of (internal) power/mana your wizard may be tapped by other sorcerers to supply them (or their spells).

He would probably also make an good sacrifice... But that's up to you...

You have answered your own question. You say the magic REQUIRES them to say the spell out loud. Unless they can speak magically or have some other way of making sounds recognizable as words, then no.

There are certainly individuals in our world that don't have the ability speak but CAN communicate. Those folks use sign language.

So it's really going to depend on if the sound has to come directly from them and their mouth (if there's tech, I'd use a recording to form the words, which you would not have if it's not a modern magical world) or if it just has to be a form of communication.

The other way I'd do it is written on paper...you can write down most of the word, leave off a couple of letters, scribble them on when you need to release it. Or you can place the spell inside a folded paper, written down, and the activation is opening it up.

That being said in magic systems such as D&D and in stories, there are always exceptions to the rule. In Harry Potter for example, saying the spell word out loud was a component to the spell, but as they got more advanced, they began talking about the ability to cast without speech. In D&D there's a feat for this.

The upshot is that while most wizards might have to use words, this one might have learned not to. And most people would think of this person as harmless, except for advanced wizards who know it's possible.

If this rule is absolute in your world, none of that will fly of course.

You can still make sounds without a tongue. The wizard may have developed his own set of spells (or even clones of existing spells) with what essentially comes down to spell aliases.

Trying the alphabet right now, all vowels, as well as the sounds that are made just using the lips (B, F, H, M, P, V, W) are relatively easy to make without a tongue, especially if the wizard has trained on them. So maybe instead of saying "Fireball", He says Wooboom or something like that.

Maybe some sort of ventriloquism would help? I am not an expert in the subject but it seems ventriloquists still use their tongue but also pronounce some sounds with their throat muscles. Your wizard will have a bit greater freedom - he will be able to move cheek, jaw and lips.

And another thing A trick ventriloquists do is that they substitute sounds that are hard to pronounce with ones that are not. You don't need your tongue for some sounds, so maybe there is still some magic you can do?

What about using a non-verbal spell to produce the sound required to cast another spell? Magic bootstrapping!

Yes the wizard would have use.
Even if he cant use the spells he can still teach through scrolls and books and depending on how common magic is in your world (and whether it can be learned or it is pre-determined) an expert could come in handy.

Maybe if the wizard was powerful enough he could adapt the spells to be suitable for him. He could use sign language to cast spells and people would be like, "that's never happened before!"

He can have magic scrolls that read themselves or a grimoire.

I see a nice story where the wizard has lost his powers by not being able to recite spells but somehow he finds a way and becomes a renown wizard, Merlin Tongueless or something.

The gods see his struggles and offers him this grimoire that connects to his mind. He doesn't even have to open and search for the spell, the book is floating around him and casts whatever spells he thought of.

He could write new spells in it and become even more powerful eventually finding a way to make more grimoires like his own and becomes a legend.

You can do whatever you like with your wizard though.

"Is it possible a wizard with no tongue be of some use if the magic requires to say the spell out loud?"

I, and I suspect a few others, first read this as "can ehe still cast the spell?".

As it stands, can be be of some use? Asolutely:

Seems to suggest that you could still cast spells, speak, eat, and other ordinary things. But then again, it's a fantasy-world so it's more about story, dramatic tension, challenges, etc. I would imagine that it would take some time, months or years even, to adapt to speaking without a tongue.

The answer to your question depends on details you haven't specified. So rather than answer the question directly, I'll ask a series of very leading questions instead. Some of these are raised by other answers.

It could help you to think in depth about how little one would have to add to a brain in a vat to get a working spellcaster.

*edit (from comment below) Given technology as it is now it would be possible to achieve in many ways. I would possibly go down the route of a Google Glass style set of glasses, with an overlay and eye tracking to select letters, words, sentences, to be read outloud by a small loudspeaker. It probably doesn't fit with the magic theme, but I imagine that could be done right now in the real world.. :)

It all depends on why the spell needs to be spoken, and if it really does.

What I mean by this is there must be some sort of magical reason for the spoken language. If the reason is that the spoken form is merely a way to concentrate the mage's will and imagination, then it might be possible he could learn to do the spoken part purely internally.

This is how I usually do magic when I am world-building for a game or story. The only time I really require a spoken part is if there is somebody actually listening for these words. For example, I had one pen-and-paper role-playing game set (unknown to the characters) inside a computer simulation. Many of the restrictions on magic were just because the programmers of the simulation wrote it that way.

Another possible listener could be a god or the universe or just the world. One very depressing trilogy I read had somebody from our world brought to a world with magic. This person actually deciphered the "sacred language" and figured out what it was for. The god for that universe (as opposed to ours) had created this language and made it so that when it was spoken the universe heard and obeyed.

However it might offend my sensibilities, many games do have the requirement of some form of spoken part to a spell. This seems to be a common trope.

Assuming he can do nothing to heal himself or work around the problem. It would depend on how many spells he can pronounce without his tongue. He would have a limited set of spells and any wizard that hears him speak will know his weaknesses, but he can still have a use.

It depends on why the wizard needs to speak the spell!

Not the answer you're looking for? Browse other questions tagged biology magic humans .

18
How does a modern military defend against a guerrilla Army of wizards
8
How to limit the use of attack magic among the population?
11
Reasons to not use the "Language of Magic" as a common language