Does my idea of FTL make any sense?

In my universe, there exist molecular level machines that can behave as a single entity. The humans use them for many purposes, including faster than light travel.

The concept is as it follows: The FTL computer creates a map of the ship containing every atom that composes the volume of the ship and everything inside it. Then, it uses something like quantum teleportation to move the atoms to another position rebuilding the ship a click away. A click means the area exactly in front of the ship meaning that the new ship will be built starting from the front of the old one. The FTL computer does this a million times a second giving a speed of one million times the length of the ship.

Tell me what you think in the comments.

As mentioned in the other answers, the idea of "quantum teleportation" isn't really applicable to your idea as presented. However, if you are willing to do a different handwave, then maybe a solution might (or might not) appear.

One of the elements of quantum physics is known as the "wave function collapse". Short form is things don't "happen" until an external observer observes the event and the wave function collapses into its final form. One example of this is the Schrödinger's cat thought experiment, where the cat is neither dead or alive until someone actually looks inside the box. 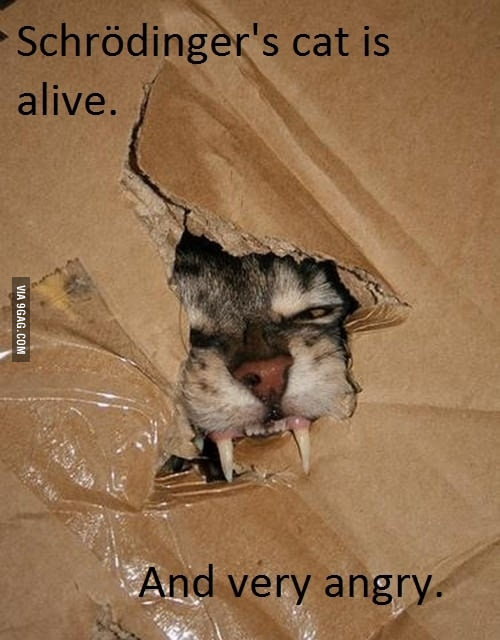 Since quantum physics is based on probabilities, you can think of things as happening because they are more or less probable than alternative courses of events. Going deeper, even improbable events can happen, but the probability of such things happening (like walking through a wall) is extremely low. The all powerful quantum computers in the scenario could be programmed to "look" for extremely low probability events happening, and "observe" them, making them come into being in actuality.

While this sounds remarkable, it isn't forbidden by the laws of physics as we know them today. Observing a particular rabbit being in a particular hat at a particular time would be a trivial example of using it in a more mundane fashion, although what we would think of as "trivial" would probably require massive amounts of computer and sensor power and literally god-like ability to observe reality. The downside of this method of travel is it is "fuzzy". While there is a finite probability of the ship appearing at point "X" at time "Y", there are also probabilities of the ship appearing at slightly different places and at slightly different times. Moving farther away from the destination point, the ship itself and the crew might also be subtly or wildly different from the one at the starting point. This would be somewhat akin to a probability cloud surrounding the desired point in space and time, so events of similar probabilities could happen instead, and even events of greater or lesser probability might occur, with the events of greater probability happening more frequently. The ship appears, but Spock has a beard. A ship appears, but it is powered by a Dodge "slant 6" motor rather than the 440 "Hemi" it had at the starting point.

A fun filled version of this idea was done by Douglas Adams in the Hitchhikers Guide series of books, movies, TV and radio adaptations, as the "Heart of Gold", powered by the "Infinite improbability Drive"

Sorry kiddo, but that's not what quantum teleportation does.

Although the name is inspired by the teleportation commonly used in fiction, quantum teleportation is limited to the transfer of information rather than matter itself.

This is well known among serious scifi readers, so I suggest you name your idea something else. Think of Alpha Centauri's matter transmission:

Transmitters based on this ology disassemble objects into the smallest component sub-particles, then transmits those particles and their underlying structural blueprint to a receiver. The receiver reassembles these objects according to the blueprint, recreating the original in every nuance and detail.

Quantumly teleporting yourself seems... unworkable. But if you write it with sufficiently techie technobabble, I think it'll work. After all, it's FTL. By definition, it wouldn't work anyway.

Just make sure that it steers the ship around obstacles ("near" is just as bad) instead of blindly heading in the direction of it's goal.

I don’t think that there is a method to teleport atoms to a new location, at least not with our current understanding of physics. If you handwaved a process like the one you describe into your world, it seems strange that you’d limit such a teleporter to only directly in front of them. Why not just teleport to the location you are going to?

If you mean that your molecular machines physically pick up each individual atom to a new location those machines would still be bound by the speed of light.

Also not quite what you are asking for but I feel like if your nanomachines are deconstructing people they are essentially killing the crew and creating an exact copy of them. If I was living in this world I certainly wouldn’t want to travel like this.

Uh, highly inefficient way to travel, don't you think? Won't it be better to use pre-entangled particles? And even assuming we use your technique, scanning a human body alone would take decades, let alone an entire spaceship! Do you comprehend the number of atoms in there? You would have to hold up the power supply of an entire planet for centuries at least to manage even one jump!

29
Would 'cheap' FTL make powerful telescopes obsolete?
2
Does it makes sense to build a “space tower” in Indonesia and Brazil?
37
Non-relativistic FTL is trivial. Why are spaceships mostly pretty small?
4
Would it make sense to prevent catastrophic failure in ship reactors upon destruction?
7
A way to hinder interstellar portalling? FTL travel
26
Do antenna farms on spacecraft make any sense or are they purely aesthetic?
65
How to prevent superluminal traveling idiots from wrecking half of the universe?
16
Does it make sense to occupy open space?