Would trams be workable on a low-gravity world?

After reading this thread from a bit under a year and a half ago about the most cost-effective means of travel on Mars, where one of the answers mentions rail as the best option, I started wondering: since rail travel depends on the friction between the wheels and the rails, which is proportional to the pressure holding the two together, which is proportional to the weight on the wheels, which would be much less on a low-gravity world than on Earth, might this make lighter rail vehicles, such as trams, unworkable or impractical on low-gravity worlds?

Some problems I thought of:

So, would low gravity make trams and other (relatively) lightweight rail vehicles unworkable or impractical?

Keep in mind railroads already have this problem, because steel-on-steel adhesion is quite poor, with only about 40% adhesion even possible, with sand application.

Track brakes are attached to the bogey (truck) and contain electromagments. They are positioned above the railhead, and fill most of the distance between the two axles. They are tied to the suspension so they can ride quite close to the rail. Track brakes are able to be run by batteries. 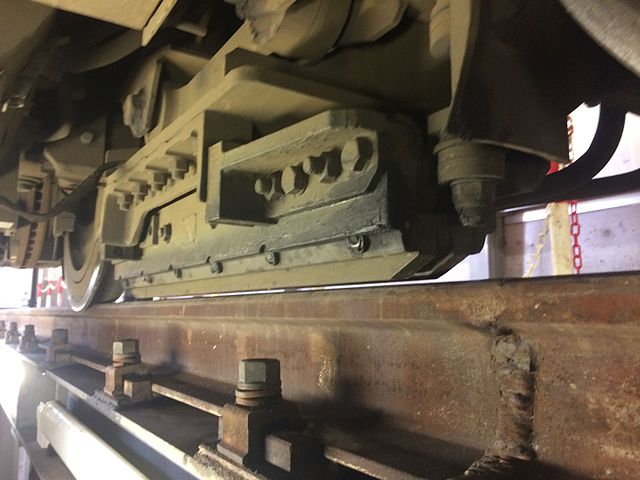 Now there are two modes to operate a track brake. First, line it with brake pads and give it free motion downward to clamp onto and slide along the rail. This is the normal operation method today.

Second, "pin" it so it does not have free motion and cannot contact the rail. Now it is magnetically pulling the wheels down upon the rail, increasing adhesion on the wheels. I'm not aware of this mode being in practical use today.

Look at tram flanges -- they are very short compared to railroad flanges, because of the way street railway rail is built. (also a tram derailing is not a big deal). Use railroad flanges on your trams. That was easy.

This isn't maglev**. Linear-induction is simply the common AC induction motor "unwound" and laid flat" - the copper-coil stator on the bottom of the railcar, the aluminum squirrel-cage "rotor" laid down between the rails. An example is the UTDC system used by the Detroit People Mover and parts of other metro systems. This linear-induction thrust happens independent from any wheel/rail adhesion. It isn't optimized to pull the train car downward toward the track, but it could be.

** Maglev: another technology that moots the gravity issue, because the car floats on a cushion of money. Seriously, cost is the problem: the technical challenges result in very high cost, at least as compared to bulletproof off-the-shelf old railroad, which can get within 5% of maglev's speed. As such, unless cost is no object, I tend to write off maglev.

Use Maglev trams and trains. They are free from the issues that wheeled transport would have. Increased braking distances for trains and cars on Mars would be a literal killer.

Rollercoasters solve this problem with three wheels around the rail.

This makes switches larger and more expensive, so it would make rail network designers attempt to avoid placing them, and instead build a tighter mesh near city centers rather than joining all the suburban lines to a large trunk, and city-to-city connections would likely get dedicated platforms.

You're right about friction being required for wheel based motion; this is why car tyres are made out of rubber. That said, ever noticed how certain drag cars, bikes, et al can do burn outs?

Just looking at how bikes and drag cars do burnouts though, you'll notice that they way they do that is to apply massive amounts of acceleration in a very short time. This introduces a massive amount of forward momentum (force) that overwhelms the ability of the tyres to grip the road. If you accelerate slowly, you don't overwhelm the friction in the tyres and you can get up to quite impressive speeds.

On Mars, the lower gravity will mean you have 3 options to ensure that you get forward movement;

Ironically, the simplest of these might be option 2; the reason why we don't put rubber on train tracks or wheels is that the train is so heavy, the necessary friction is achieved metal on metal. BUT, on Mars, it may be as simple as making the tracks cog-rails, and the wheels cogs. This effectively greatly increases friction by putting most of the pressure of the wheel against the front of the cog rail tooth, and the rear of the train wheel tooth. Theoretically, you could put bands of rubber around the train wheel, but we don't do that on Earth because of the maintenance hassle (car wheels are MUCH easier to remove) and that wouldn't be likely to change on Mars.

Of course, the other option is that you just load up the train. A train that weighs less can carry more mass to generate friction (but physics being what it is, this train will still take more energy to move). That said, the increase in energy required to move the increased mass may be counterbalanced by the lack of atmospheric resistance because Mars' atmosphere is less than 1% the thickness of Earth's. In any event, expect Martian trains to carry much more freight than Earth ones.

Finally, you could just accelerate and decelerate between stations at a much more reduced level as we would on Earth. The good news is that you wouldn't need a very large engine anymore (power to weight ratios again) although it would mean that your train is going to be much slower in getting between short term stops. This is not an option for an inter-city train, but would make much better sense for a trans-continental equivalent on Mars.

This last option has one flaw; the massive changes in altitude around Mars. Earth trains also struggle with this, which is why we make so many rail bridges and tunnels. Mars has much larger changes in altitude between places we'd actually want to go so this may be less of an option and a weak engined train is even less likely to be able to climb a (say) 5 degree incline for an extended period.

So; I agree that rail is still the best option, but exotic wheel options are not necessarily required, and switching could still be preserved with minor modifications to the way train lines work (like light cogging on track and wheel). The one catch with such an option would be that the engineering of tracks and wheels would now have to be more precise and putting pennies or rocks on the tracks would now be more problematic, but that is perhaps commentary for another question.

Rack or Cog railways would not depend on gravity as much for their friction, and you could guarantee contact with between the cog and rack by having wheels above and below the rail.

All the switching problems were solved long ago, and the wheels are applied to all sides of the rail. In some designs the load bearing wheel is not the wheel providing thrust or braking, the side wheels (or a track brake does) that, which exist in opposing pairs so they are not affected by the reduced weight. 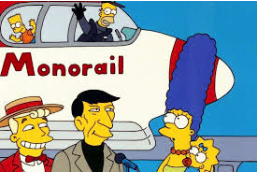 It can have an inverse triangle shaped track. This allows rubber tires on top to carry the weight, and tires on the beveled sides to guide it.

But much more, all the tires would have airbag suspensions, allowing the wheels to press on all three sides of the triangle in precisely controlled ways. While the top ones would bear the weight of the monorail, all three tires would also be opposing each other, effectively clamping the rail.

These extra "opposition forces" create artificial downforce-on-rail that doesn't depend on the weak gravity. This extra adhesion is just as usable as gravity-derived adhesion. Better yet, monorails tend to use rubber tires on concrete rails, so adhesion is comparable to an automobile, at around 100% rather than the ~40% of steel-on-steel.

It should be able to brake quite well, as much as two "gees" on Earth and quite a few local "gees" -- which may be too much for the safety and comfort of those acclimated to the weak gravity, especially if (like most trains) it doesn't have seat belts. Earth transit systems prefer to limit accel/decel to 4.5 mphps which equates to 2.0 m/s2 or about 0.2 gee.

Just to add my two cents here: less gravity would give some simplicity if compared with regular (Earth) trains/trams.

And all this not about electric-magnetic field, just old good mechanics. With electricity involved, you can move far beyond this point.

3
How to fly around the Martian thin layer of sky without burning holes in our pockets?

6
Using electromagnets in tracked vehicles
15
What would a steam locomotive look like if steam power became yet again the main type used in rail transportation?
12
Which astronomical or cosmological event would explain periodical low-grav-effect on earth-like planet?
18
In a world where Magic steam Engines exist what would keep people from making cars
6
Making a Plasma Gun that works
15
Constant acceleration as artificial gravity. Would flipping over halfway still be comfortable?
5
Would a Single Propeller Back Configuration make more sense for an Anti-Gravity Airplane then a tractor configuration?