How can I make a planet covered in ice with an ocean beneath the surface?

In a story I have been working on, there is a planet called Ieuclite. I want to have its surface be entirely covered in ice and have the people live in cracks and fissures. But then I thought, what if there is an ocean beneath the surface? And what if these people evolved to be able to stay underwater for very extended periods of time (yet not fully aquatic). Some other information is that this planet is technically a moon that people from another planet colonized so they could collect the water (for other reasons that go way beyond the point of this question).

I want to keep my idea as realistic as I can, and I often tell myself, "it's just fiction, no one will really care," but at the same time I really want to have science backing up most, if not everything I write.

Also, any ideas regarding the actual species living on this planet would be greatly appreciated as well.

Edit: The aliens that colonized the planet for water come from a very dry and large planet with very heavy gravity. I read in a different Answer on this site that in heavy gravity, it would be favorable to sleep in water with breathing devices, because the water could still hold up your weight and keep you afloat. So they need to harvest more water that's readily available, and they decided to colonize the moon so they could just send little pods back with the water rather than travelling back and forth.

In the Solar System, two moons are covered with ice and have subsurface oceans: Europa and Enceladus. Europa orbits Jupiter; Enceladus orbits Saturn. In the case of the latter, jets of water vapor were observed, indicating an underground source. For both moons, the oceans survive through tidal heating by the giant planets they orbit. Energy is transferred to the moons, which heats up their interiors, keeping them warm enough for liquid water to exist below the surface.

Now, you've described the home planet as having "heavier gravity". If the planet's mass is anywhere near the level of that of, say, Saturn, then you should be able to come up with some pretty good tidal heating. You just need to have the right parameters for the moon's orbit, composition and structure.

RonJohn beat me to the idea of a snowball Earth, but I'll talk about it nonetheless, because it's a good option - and doesn't involve another body. Moreover, it may have happened, at multiple periods in our planet's history, and so it's quite feasible.

Essentially, you need a terrestrial planet with a good supply of water - oceans. You then need some sort of mechanism that will cool the planet and lead to more cooling - a feedback mechanism. (We see something similar in global warming, where increasing temperatures unlock more greenhouse gases, such as through the melting of ice.) This means that the cooling will continue, rather than being damped and eventually stopped.

This mechanism could be as simple as drastic snow buildup, which would lead to less heat being absorbed. Alternatively, some sort of mass reduction in greenhouse gases could reduce the heat trapped by the atmosphere. Both of these would be self-reinforcing, leading to a true snowball planet. They're better than one-time events, like an asteroid impact, because those effects will end on relatively short timescales (e.g. when dust dissipates).

The reason is long-lived radioactive isotopes that decay slowly enough that primordial decay is still happening. You have an entire planet with a fairly predictable fraction of its mass made of that stuff. That makes heat, which makes the planet's core hot. That heat has to go somewhere.

Aside from making the core rather hot, the heat is also going to propagate up toward the surface. It will be competing with solar load and heat losses into space. As we well know from this planet, the balance between solar load and space losses determines the surface temperature, so if it's far enough from the sun, the surface will freeze of course.

Ice is a fair insulator and snow is a lot better. The thicker the ice/snow, the slower the thermal transfer from the earth's core, and the more that heat is "bottled"/contained. So if the oceans are deep enough, the deepest parts must melt.

Look to Snowball Earth: if -- in an extreme Ice age -- the ice sheets advance far enough, a runaway effect will occur, and the whole moon will be covered in ice. Since ice floats, and the oceans are deep, large and salty, you'll still have liquid water in the depths. If there's no volcanic activity to subsequently spew out CO2 and methane to warm the atmosphere, you're stuck in the snowball.

You are asking about subsurface oceans.

So astronomers and planetary geologists believe that subsurface oceans are possible and that some exist in our solar system.

The heat to keep the subsurface oceans liquid comes from the decay of radioactive isotopes and from tidal flexing and heating of the moons and planets in a satellite system.

If you want your story to be plausible and your people to be like humans then you have to calculate the orbits and masses of the astronomical bodies so Leuclite has sufficient radioactive and tidal heating for the subsurfac eocean to be warm enough to be liquid. And you have to consider the chemical composition of the ocean which may be only water, only methane, only ammonia, or most likely mostly water with some other chemicals included.

It is quite possible that the ice on the surface of Leuclite may be over a hundred kilometers or miles thick.

Thus it may take major expeditions for people living partway down in cracks in the ice to reach the bottom of the ice and enter the subsurface ocean. If the people from another planet were land dwelling air breathing mammal-like beings, they will need either submersibles and diving gear or else need to use genetic engineering to give themselves gills to swim in the subsurface ocean. Or both.

There may possibly be alien life in the subsurface ocean. Harvesting plant or animal life for food or other resources, and dealing with hypothetical intelligent subsurface life, may be motives for underseas ventures.

I hope this will be some help to you.

Pressure increases with depth. In the following phase diagram we find a small region below about 270K where an increase in pressure (in the 10MPa to 200 MPa region) causes a phase change from solid to liquid. This is many orders of magnitude more pressure than Earth's surface, but comparable to the pressure in the Mariana Trench. 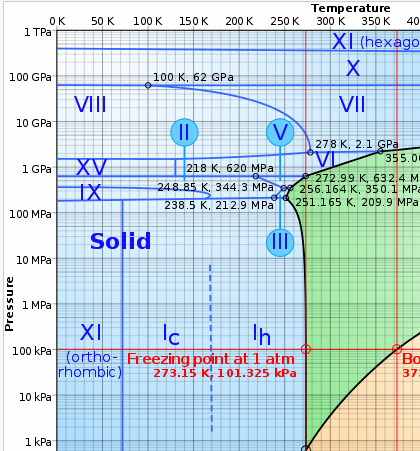 Requires your home-world to closely orbit a large planet or star. Europa and Enceladus are in our solar system orbiting large planets (we've confirmed their under-ice oceans), and we've seen planets orbiting small, dim stars in other systems far enough for ice, but close enough for tidal stretching.

Uranium-238 and Thorium-232 decay inside the Earth. A different planet, in a colder part of space, could sustain a liquid ocean beneath an ice crust with a little more Uranium in its core.

The Earth's core temperature is only about half from radioactive decay. Planet formation lowers the gravitational potential energy of a system quite a bit, and much of the energy of formation simply hasn't left. Water and ice are passable insulators - especially if there are miles of them underneath an atmosphere.

Salt impedes the formation of ice. Whenever water evaporates, it leaves the salt behind. Imagine a very wet planet was slightly colder than Earth. Whenever surface water gets exposed to the atmosphere, the evaporated water falls elsewhere as snow (because it's cold enough that pure water freezes, but not cold enough to freeze salt water).

It sounds like all of the creatures in your story are non-native to the system which means 'whatever you want.' As far as native creatures go, we'd expect 'plants' using chemo-synthesis, their predators and any creatures from above which may be scavenged. There are many microscopic organisms that grow in snowy environments. It'd be hard to have Nitrogen and Phosphorus cycles on the surface of an Icy ocean ball planet.

If you want more interesting creatures who evolve with photo-synthesis, consider a planet with an equatorial strip that melts during the day or rock mountains that push above the icy plains.

If you want more to scavenge below, consider a gassy planet with an aero-biomme above, and an ocean below its Ice crust.

Not the answer you're looking for? Browse other questions tagged planets creature-design science-fiction space .

11
What are the requirements for an atmosphere retaining moon with a stable orbit around an Earth-like planet with non-destructive tidal forces?
4
How to make a planet with differential gravity and constant daylight
25
What's the biggest reasonable natural planet or moon with Earth-like surface gravity?
4
What would the clouds of a planet with 100% surface water look like?
14
How large can surface gravity anomalies grow before the planet becomes uninhabitable?
4
How much does a moon’s gravity effect the "free-fall acceleration" of an object on the planets surface?
8
How much surface water do I need for plate-tectonics on a planet?
14
How to dry an ocean planet and turn it into a salty desert?
7
How big could a water planet be and not have an ice core?