I'm creating a realm where materials, food, etc are created through a magic artifact, transforming a specific type of sand. Magic is limited and a Wizard can't create flying or moving objects. The realm doesn't have combustion nor electricity and humans are the only "living" entities. Sort of a purgatory, to make it simpler.

The way I designed it, transportation is a major problem, as there are no horses, but that is fine, I will have to work around it. However, I want to speculate about alternative means of transport that could work in this realm. Two come to my mind:

What other logistics could be used to transport people and stuff?

I'm trying to check if I'm not ignoring something that could be a major transportation means between cities and I'm looking for efficient ways to move people inside cities. 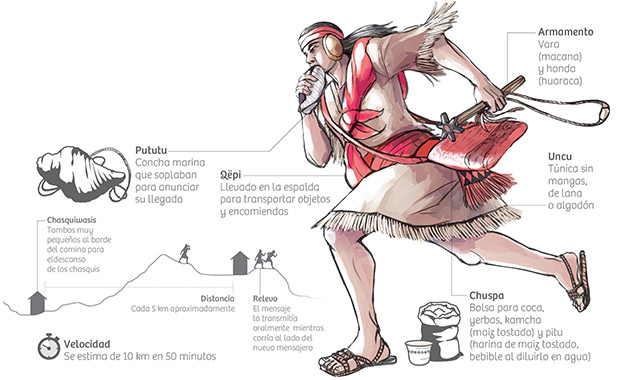 â€śThe Chasqui played a fundamental role in the Inca Empire. They formed the empireâ€™s communication system, racing up and down mountains at amazing speeds, in order to deliver important messages. Teams of Chasquis could transport a message as far as 200 miles in a single day. Chasqui hopefuls underwent a fierce selection process but only the fittest and most able would go on to become legendary messengers

Humans are really fine distance runners. Probably only a horse can outlast a fit runner over a long stretch and even then it can be a contest. To maximize speed, you want roads. The Inca did not have wheels or horses but they did have excellent and long spanning roads which were a key part of holding their huge empire together. https://en.wikipedia.org/wiki/Inca_road_system

Roads were used mostly by humans on foot because except for llamas that is what there was. No vehicles. No wheels. The chasquis are the coolest because they were the fastest but you can bet there would also be some big slow guys toting bales along.

Looking into it even a little bit, the terrain of your realm is going to make a big difference. After the Roman Empire, paved roads were uncommon in European cities until the 1700's. This slowed down transportation a lot. What roads were built were built by serfs, with rocks, as a kind of tax. However, the fastest and most preferred way to get anywhere was by boat on navigable rivers and canals.

So the first question is, does your realm have the clay to make pavers, the rocks to use as pavers, or any navigable water?

After deciding what your terrain will be like, then decide what will be appropriate for it. If people are transporting sand across sand, then sledges will probably be easier than wheels, since they aren't as likely to sink into the sand. If they are transporting things over pavers, then handcarts would probably be the norm. Over rough terrain that would break wheels or smaller loads within cities, you'd need porters. And if you have any navigable water, then ferries and barges would be used.

You could use handcarts. https://en.wikipedia.org/wiki/Handcar They can be either powered by hand using mechanical means, or simply by humans pushing them.

You said this is sort of a purgatory. A slave-like class of people forced to push around others in their fancy, plush handcarts seems like purgatory to me.

Not the answer you're looking for? Browse other questions tagged materials transportation .