What are the scientific issues with this method of dragons breathing fire?

I am including some dragons in the universe I'm building. Now, I have already decided that only baby dragons will fly, but I am having some problems with breathing fire. My current design:

Dragons have lots of symbiotic anaerobic fungi in their alimentary canals. Breathing fire requires a diet heavy in sugar, and as a result, dragons will often make their homes in places with lots of carb-rich food. The symbiotic fungi will break down the sugar, producing alcohol which will be stored in special glands on either side of the end of the dragon's mouth. The dragon's tongue has a small, hard protrusion under its tip. When the dragon must breathe fire, its alcohol glands undergo violent convulsions, ejecting their load with great force. At the same time, the dragon strikes its tongue against one of its teeth, creating a spark that ignites the alcohol. For extended torrents, glands in its mouth secrete an oily, highly flammable solution. The dragon sets this on fire, and then proceeds to shoot a continuous barrage of alcohol. Fire-resistant mucus protects its mouth.

Now, I'm pretty sure there is a problem with the science somewhere. Can somebody help me find it, and/or suggest a better method?

The method seems a bit convoluted, not to mention that a dragon who eats a carb rich diet will not be capturing princesses, but attacking fruit orchards to get the materials needed for fermentation. (This also leads to the interesting question of why vegetarian dragons need to breath fire on the first place.....)

What may work better is to scale up the defence method of the Bombardier beetle: 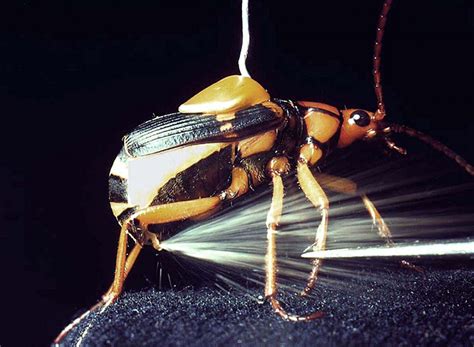 The beetle essentially secretes two chemicals in glands in the abdomen, and squirts them out the back end. The chemicals are hypergolic (react in contact with each other), releasing a searing chemical spray against their enemies. For anatomical reasons this is going out the back, there are strong sphincter muscles to contain the chemicals and all the abdominal muscles can contract to mix and eject the chemical spray.

Dragons could do the same trick with glands full of hypergolic chemicals in the cheeks or throat, and coughing (or even vomiting if things are far enough back) to eject the chemicals, hopefully the mixing of the spray occurs far enough forward that the ignition point is past the dragon's face (breathing in fire is especially not recommended). Or the dragon could be like the Bombardier beetle and shoot fire out the cloaca. The warning sign for brave Sir Knight is when the dragon suddenly turns around...... 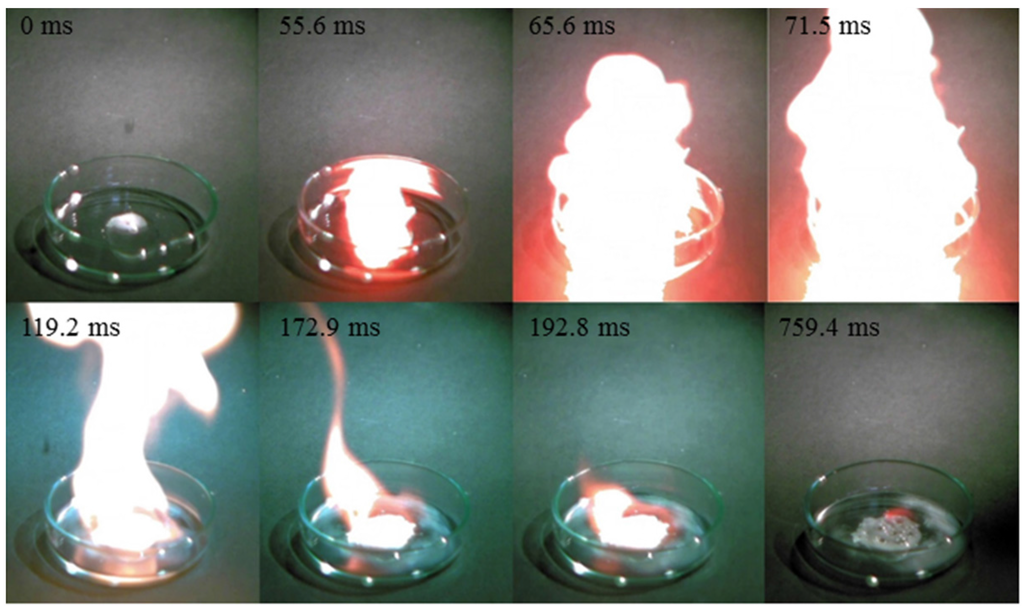 For sustained fire breathing, you need an insulator (A thick mucus or secretion) If you atomize it using air (violent convulsions will lead to spurts) than you can extend the duration of fire at the cost of heat; this is what we do in combustion engines. Also atomized ethanol with salt (to prevent the colorless flame) it will look brighter, be hotter, and last a good while (4 hr per liter) longer

Ok, to me the easiest way would be to create a dragon that is either ruminant OR that have his diet strictly made of ruminants because his digestive system is made for that. You know, the sheeps, and the deers and the cows.

Now, as ruminant (or ruminant eater specialist) he have few stomachs and one of them is made for that grass and methane. Or to be exact the absorption of methane. It then can be stored in bags near the spine that are pressed when dragon take a deep breath. So he have oxygen in lungs which he can exhaust with the gas and crate flammable mixture.

Kind like humans have one opening for air and food but still can have food in mouth and air in sinuses. Or how you laugh so much you spit milk out of your nose.

Now the problem is how to create a spark to light that. Again, easiest option would be teeth with traces of flint. Somehow, like we human produce stones in kidneys and have tartar, dragons can have flint. It can be created within dragon itself. Back to digestive system. As silicon is present in many plants (see typical dragon diet) and thermal waters it could be paired with oxygen. Thermal waters would also mark natural occurrence of dragons or dragons lairs.

It would also create a natural diversity among dragons as those who eat moose don't have such sustained fire breaths (more meat less grass so fever meals) or dragons that can't breath fire (as not everybody have kidney stones) but still make people die in their vicinity (as methane is odourless but people suffocate with the lack of oxygen).

With your design I would go with fully vegetarian dragons. Why? have you tried ever to squirt an orange skin into the lighter? Yeah, the juice in citruses skin is alcohol and flammable (also it smells nice).
So your world could have a lot of different citruses, dragons eat them, and again digestive system, are able to store Limonene and later use it.
And that also could serve as world building as in warm climate there would be a lot of dragons but very calm as there is a lot of food. While in colder climates the food would be scare the dragons would be angry and more prone to attack settlement and drink human stored mead.

I know that this question's a bit old, but I happened to know something on the matter, so I thought I'd add my grain of salt.

So, there are two ways I know of of doing this:

So, let's look at number 1 first. This, while not actually fire, could achieve the effect of fire, while retaining the plausibility of them looking so much like real squamates. So, a poison gland in the jaw produces a very strong zytotoxin that burns skin, causes paralysis and induces fever. Upon contact, the skin of animal would blister, and the venom would flow through the victim's veins, feeling very much like fire.

This could potentially liquefy the inside of smaller prey, and do so partially for larger quarries. But, there are a couple of problems with this so far. The first one being that dragons are very big, and the range might be unsatisfactory for a "cool" plot. So, I suggest adding muscles around the poison glands which contract and pump the glands, shooting the poison several metres. These muscles would also allow the dragon to regulate the amount of venom they squirt. The second problem is that reptiles shed their teeth very often - and the teeth are the best body part I can think of for the poison to go out of. But, there is a solution at hand. If the venom glands only connected to a few permanent fangs, the rest could be shed as usual.

But, you asked for fire, and that's not really fire. So, if you're not really that pushed on explaining the evolutionary background of dragons (Convergent evolution could potentially do it, anyway.), there's another method that could achieve real fire-breathing.

Suppose you had a group of animals that had formed a symbiosis with microbes in their digestive system that produced hydrogen as a metabolic waste product. Some of these animals could store and compress the hydrogen in organs rather similar to lungs, and expel it through a tube leading to their mouths. The hydrogen would be ignited through bioelectricity, giving them the ability to spew flame.

But, there are obvious dangers when it comes to breathing fire. Perhaps your dragons could have a "false pallate" like crocodilians, which would prevent fire backfiring and barbecuing the dragon's insides. To protect their eyes, they could have a transparent membrane like seals and other animals.

There are some possibilities of fire-breathing aside the classic "Ima burn you" purpose. For example, dragons with less powerful flames could use it to start bushfires instead - igniting dry vegetation to create an inferno. To take a leaf out of the whales' book, each species could have unique flame shapes that would distinguish them from different animals.

There are several problems with this means of generating flammable compounds:

You'd be better off having your dragon have a conventional dragonish meat diet, and have it produce flammable oils that it can ignite - such oils have a higher energy content, burn hotter, and may be produced by biochemical processes within the dragon's own tissues.

A better solution still would be for the dragon to obtain its fuel from an external source, but flammable or better yet, pyrophoric compounds, or even their precursors, are difficult to obtain in the natural environment.

I think hypergolic fuel is the way to go. They can be mixed and stored separately, and combined in or slightly ahead of the mouth.

Not the answer you're looking for? Browse other questions tagged biology dragons fire or ask your own question.

33
How do dragons not burn themselves?
15
Could dragons theoretically breathe alcohol based fire?
9
Napalm-Breathing Dragon

0
How could an organism with keratin fur/hair and feathers generate a spark of static electricity? How well would this spark start a fire?
40
What would justify hunting dragons that are made with real physics, with melee weapons?
8
Can a person covered in mud survive an ordeal with fire breathing dragon?
3
Anti-Dragon armor, shields and melee weapons
7
How can my dragons use their tongues to control their fire breathing?
2
how plausible is this method of humans breathing fire?
2
The Validity of Hunting with Fire
5
How to prevent medieval houses from being burnt to ground by fire breathing dragons?