Can I have a carnivore with large canines that kills by crushing the skull of its prey?

For this question, I've got a pretty large carnivore. I haven't quite decided on their hunting style, but am leaning toward them being an endurance hunter. They're comparable in size to a large present-day Earth feline (lion, tiger or similar) and have long, rather sharp claws useful for grasping, holding and cutting.

There are two traits that I'd like to have in this species, which I am trying to figure out if they could evolve together.

One is long canine teeth. Not quite the size of those of a Smilodon (also), but certainly in line with those of Machaeroides eothen or perhaps slightly longer:

The other trait I'm looking to have is that they kill, at least at times (as in, not necessarily every kill is done this way, but a non-negligible fraction of kills are), by actually crushing or biting through the skull of their prey.

Jaguars come pretty close to fitting the bill for the latter, but their canines are comparatively shorter.

Can I plausibly have both, or will I have to settle for one or the other? Particularly if the latter, then why?

I don't think so, since the "saber teeth" are so long that they extend far out of the mouth that they'd get in the way of trying to crunch down on it's prey's skull. (Imagine trying to bite into an apple if you had such long teeth.)

To crush something large with your jaws, you need:

The jaguar's skull meets all six of those criteria, and that's what any carnivore needs. To me, it looks like the Machaeroides eothen teeth would fail criterion 6. 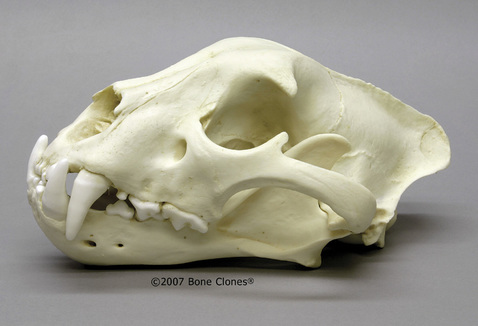 You have to consider how such a creature might have evolved.

If it has long canines and is adapted to crushing, then maybe it uses mostly the canines to kill, and then the crushing force to break some prey's hard skull. Brains are rich in omega-3... As far as I know, the next best source is the liver of deep-dwelling fish, which except in salmon-rich areas would be too rare for a land-dwelling animal.

Last but not least, there is precedent in our world for long, pointy teeth and great crushing force on tetrapods. Crocodiles sometimes eat turtles, and they use their great bite strength to break through the shell. Now look at the teeth of a saltwater crocodile: 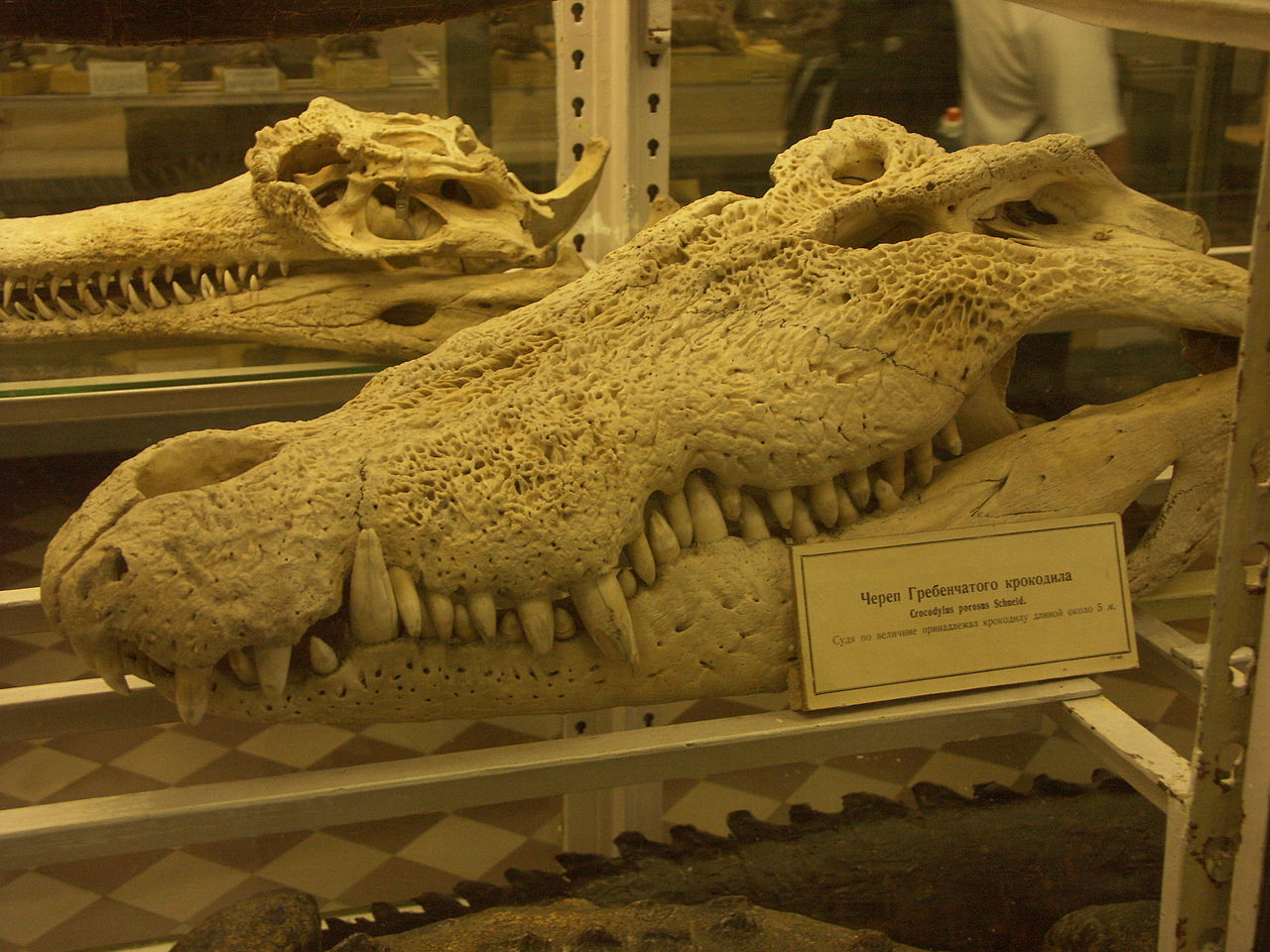 If your hunter is a mammal, it might be one that is evolving to fill in a niche which belonged, or would have belonged to crocs.

It could but usually not because there are easier methods of dispatching prey.

A skull is usually thick and strong to protect the brain while the neck is soft and full of arteries and the windpipe.

Why attack the enemy at their strongest point when you can attack the weakest?

There is a real-life animal that crushes skulls with its mouth, but as means of self-defence against predators: the hippopotamus. If you want examples, just look up "hippo crushing lion head". Hippopotamuses also have large, pointed canines in their mouths.

The long canine teeth of Sabre Tooth tigers and their relatives were evolved not for crushing, but for stabbing, particularly stabbing through the neck of their prey and slicing through blood vessels, cutting nerves and otherwise incapacitating their prey.

Lions, Tigers and other large cats attack the necks of their prey, trying to crush the windpipe, cut through blood vessels, break the neck or strangle the prey, and Sabre Tooths just ramped that up because their prey were ice age megafauna: 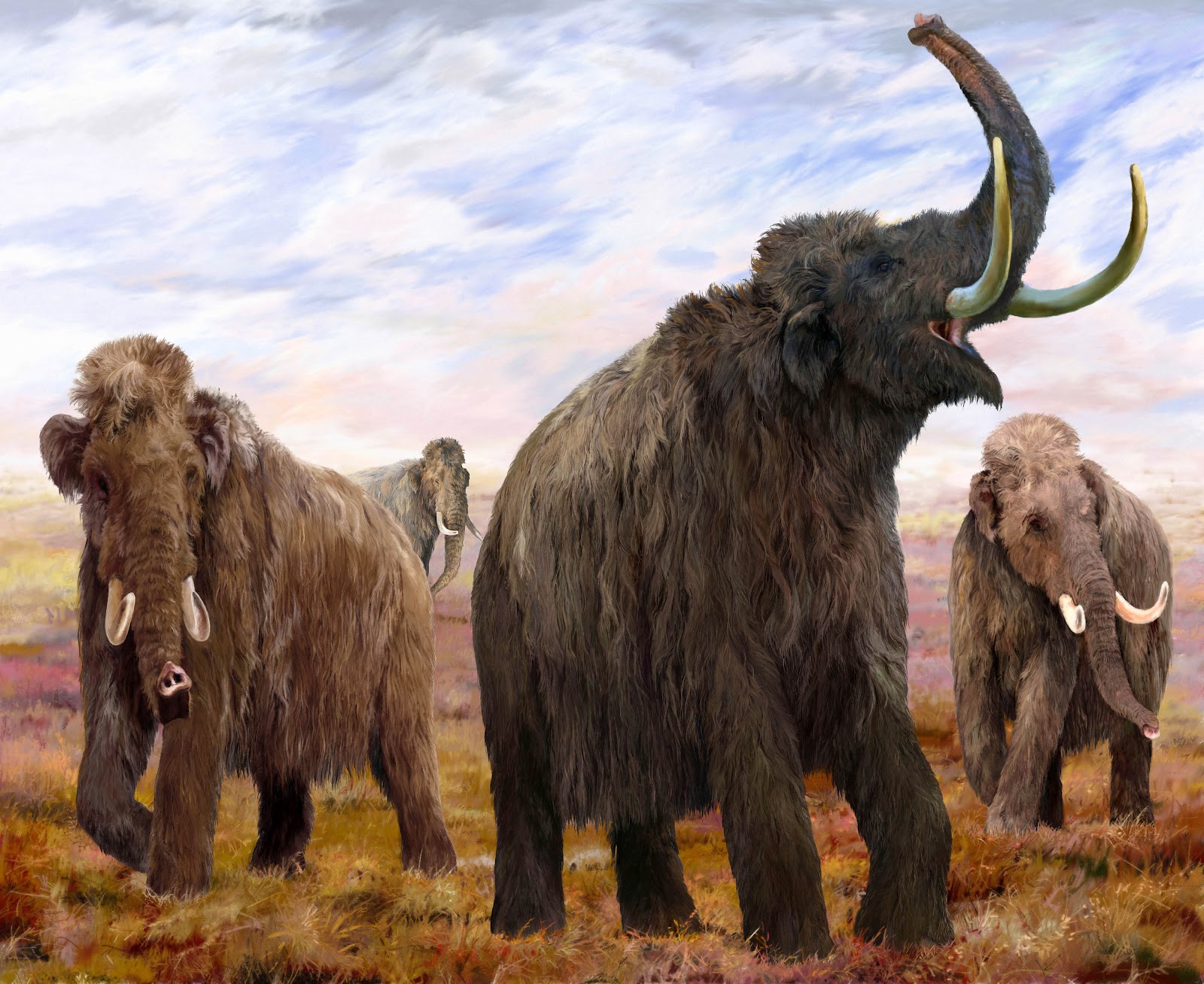 Crushing skulls, while it sounds exciting, is pretty difficult. The skull is one of the strongest parts of the body by design, since it shelters the brain and many of the sense organs, and is also generally large, requiring a pretty big mouth in relation to the skull just to fit in enough to get a good bite. 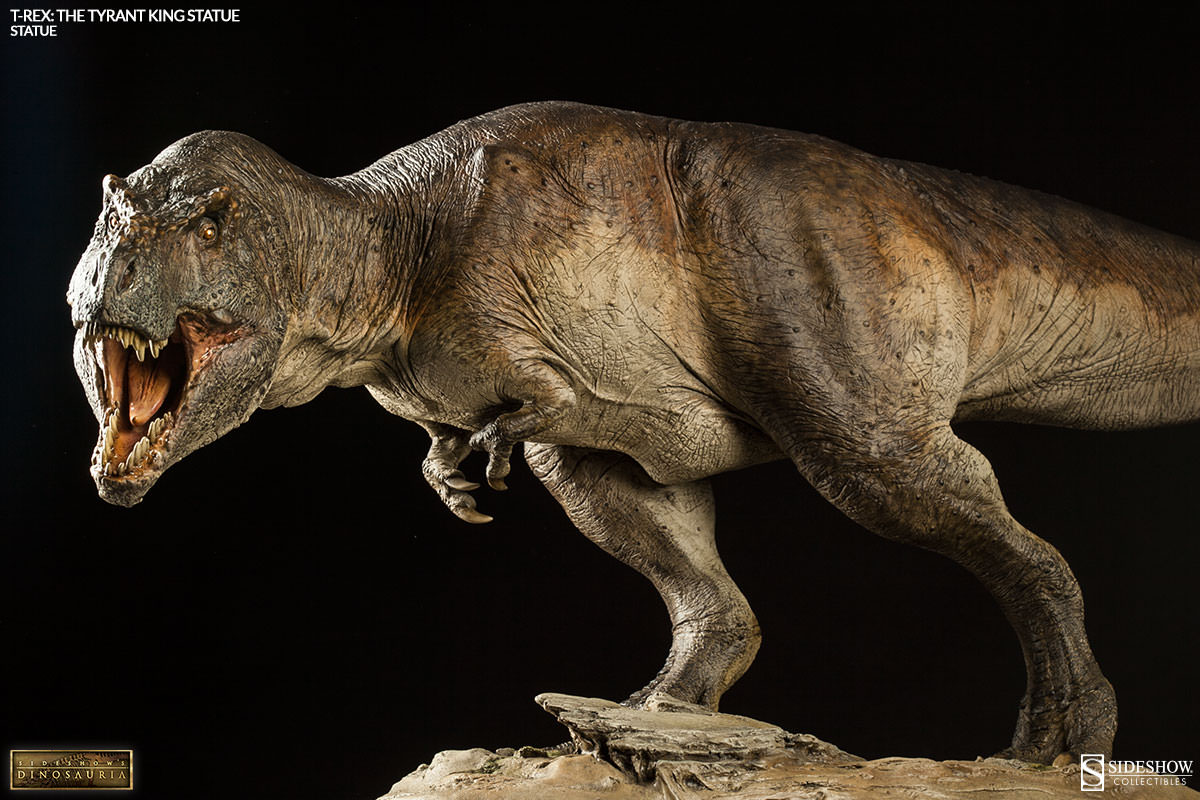 You need jaws about this size to do the job....

Crushing is also something which requires flat surfaces, look at the jaws of a nutcracker compared to a steak knife. In the animal kingdom, crushing is done by molars. This is actually so energy intensive, many animals outside of mammals simply bite off the leafs etc and send it to a "crop" where it is ground up by the action of rocks that the animal swallowed. This isn't a very viable plan for a predator.

The only creature which can reliably crush skulls are human beings. The Ancestors learned long ago to amplify the power of their arms with rocks and clubs made of bone or wood. This should give you some idea of the leverage involved, and the potential size of the jaws that a "skull crusher" would need. 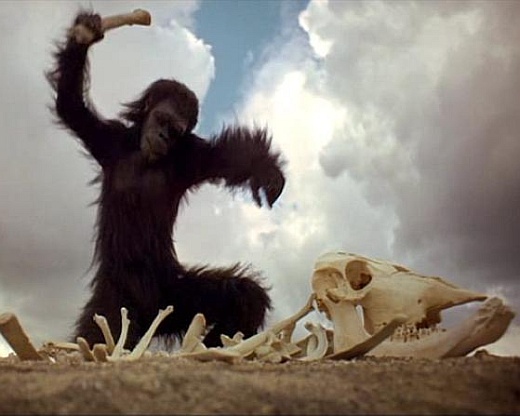 Not the answer you're looking for? Browse other questions tagged creature-design carnivorous or ask your own question.

12
How does the digestive system of a creature that can turn around in its own skin work?
49
Could an organism have evolved to kill its prey by shouting at it?
7
An animal that puts its prey to sleep
12
How can a nine tailed fox catch its prey?
62
Why would two species of predator with the same prey cooperate?
7
What factors would allow this caninoid species to evolve successfully?
1
Is a creature that within minutes can melt a block of ice with its hands feasible?
8
The Biology behind a slime that uses hydrofluoric acid to disable and digest prey.
3
How big of a taur do you get out of a human?
4
What advantages or disadvantages would a bipedal humanoid have if their neck connected at the back of their skull rather than the bottom?