Physical qualities to distinguish an insular group of radioactivity survivors?

Immediately after the apocalypse, a call went out for able-bodied adults in what was considered a noble death sentence at the time: go out into the radioactive wastes and begin to neutralize the fallout. Those that volunteered were provided radsuits, the means to repair said radsuits indefinitely, and lumbering zamboni-like machines that tilled the top six inches of soil under the ground so as to effectively bury the radioactive dust that had settled, then applied a thin layer of bacteria-synthesized Prussian Blue to the turned earth to serve as both a marker of 'neutralized' ground and to provide protection against caesium created by uranium-235.

Two hundred years later, this group still exists in the wastelands, having multiplied and flourished in their nomadic journeys. They have essentially become a cargo cult, still fulfilling their purpose in the 'blue zone' and essentially elevating the lumbering cleaning machines (along with their self-sustaining bacteria tanks) into supernatural protectors while they await the return of those who gifted them these great earthmovers.

I'm trying to think of a good, scientific reason to give them an odd physical trait that disallows easy reintegration into society. Originally, I hoped the Prussian blue was an effective skin dye, but I haven't yet figured out a way to pull that off without giving them major potassium deficiencies. They're likely a bit inbred by now, so my second thought was something akin to methemoglobinemia, the inherited disease that makes people's skin turn silvery. But combine that with the radiation they must have absorbed in their lifetimes, it strains credibility to say they managed to wander a radioactive zone for generations with a blood disease.

Can you think of a good, easily-discernible physical difference this group might have that would help reinforce their isolation without resorting to Fallout-style ghouls/supermutants (overdone) or crippling diseases?

I can come up with plenty of ideas story-wise, but I'm coming to you guys for science-based, rational consequences of the scenario I've set up.

They were already different when they went out into the wastes.

As the apocalypse swept over the Earth, the nations of Northern Europe did what they could to take in refugees from dying lands. Among these were a large group of Kyrgyz herders, airlifted to Copenhagen in a single group.

The Kyrgyz were grateful to their new country. When the opportunity came to be of service they volunteered as a group. Two hundred years later the keepers of the land are still ethnically Kyrgyz, living in much the way their ancestors did on the steppes of Kyrgyzstan. 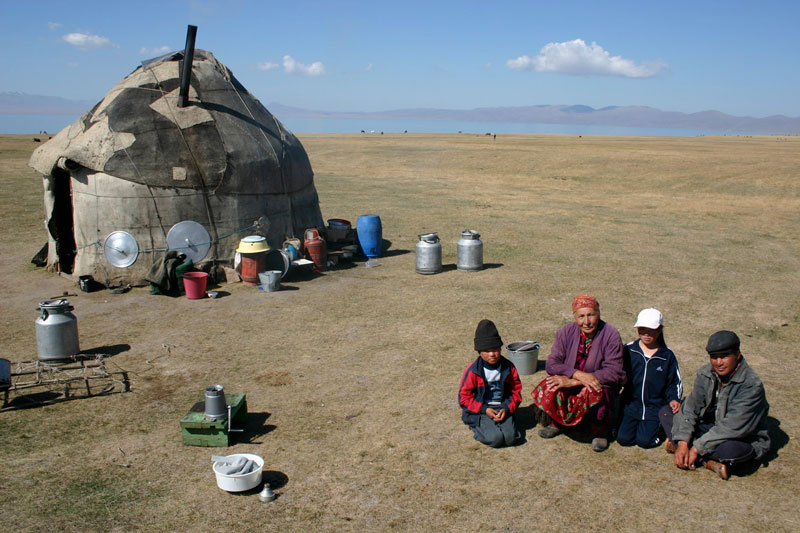 If the Kyrgyz do not meet the needs of your story, choose any ethnically distinct nonEuropean group of refugees and turn them into the keepers of your future Europe.

Radioactive fallout only lasts like 6 weeks at dangerous radioactivity levels. The biggest issue is strontium-90 in the soil taking the place of potassium in the plant's growth cycle. This can be dealt with pretty much at leisure after the fallout's 6 week half-life (as little as 2 weeks, as many as 8 dependent upon blast proximity). Then you just scrape the soil layer contaminated with strontium-90 and re-seed the area with potassium. Strontium-90 would be out of the environment on its own after a few decades, so you really just need to treat an area big enough to grow food in and let time handle the rest of the countryside. Strontium-90 is only hazardous if ingested, so your fallout cleanup crews would pretty mush not have any need for anything heavier than a regular dust-mask, nor would they be needed for anything outside of the immediate area planned to be used for growing. The closest thing to physical differences such people would have would be a higher than usual instance of cancers and possibly some level of increased instances in birth defects.

I'm sorry, but your whole story idea depends on radiation basically being magic. Fallout basically takes care of itself after a few weeks.

Some sort of mental deficiency. If you volunteer for this kind of shit job you are not that bright, and then you have a closed community of not-that-bright individuals exposed to radiation. I think that pretty much guarantees that you will be visibly "special".

20
How would interstellar human cultures describe themselves long after Earth was lost?

13
Could a group of survivors realistically find useable ammunition and/or weapons in a post-apocalyptic world?