Would Combined eyes be possible?

Imagine a animal with eyes that are a combination of arthropod compound eye with vertebrate eye,I visualize this like a eye with the sclera covered in a layer of compound eyes,or compound eyes with big and well developed eye and the small ones covering the non transparent surface of it.

Would such structure be possible?And if it is possible would it have any usefulness?

I've imagined a few possibilities. One would be a compound eye but with each lens modifiable and leading not to one receptor but an eyeball containing many. Outside that, you'd have a geodesic arrangement, so that each mini eye received and undistorted image. The brain would need to process a much more complex image.

I can see how you might get more receptors per unit volume as more of that volume is occupied by a surface. A detached retina would also have far less effect because it involves a much smaller percentage of the retina in that eye. With each sub-eye able to focus independently. That would mean more could be in focus at the same time.

The benefit of this design is that you can increase the range of colour receptors without impacting resolution. If you changed the human eye from three types of cone to six, you'd halve the resolution. Here, there's overlap, so six or even nine colour cones wouldn't reduce image quality.

The motor neurons needed for control, not to mention the visual cortex, would be outrageous. That's going to be a serious limiting factor of this design, as is the increase in the number of muscles, due to the increase in complexity. Eye movement would be reduced, due to the extreme weight, but you can have static eyes that have 180'x180' vision.

I don't see anything fundamentally wrong with this design, it's just a giant compound eye with a mini eyeball minus cornea behind each hard lens. It almost certainly can't occur naturally, although I should emphasize "almost", but it requires nothing that is impossible in nature.

The complexity reduces the reliability of parts even as the criticality of a part is reduced.

In such an arrangement, where two physically distinct eyes can see the same thing, you'd have stereoscopic vision, but you'd have nearly all-round vision at the same time. Most of it would be pseudo-3D as you'd get very basic depth information from the compound eyes.

Space restrictions mean this would really require an animal with essentially no other sense. Some of Carl Sagan's Jovian predator lifeforms could benefit from such eyes if they were engineered.

I believe what you're implying is quite different from polycoria, as that is more than one aperture, but a single lens. It is also different from an insects compound eye, which has multiple apertures, lenses, and sensors. Luckily, an eye with multiple lenses, multiple apertures, but one sensor is possible as well. Photographers sometimes employ the use of a multiple-image-lense which has several lenses combined into one, with a single focus point. 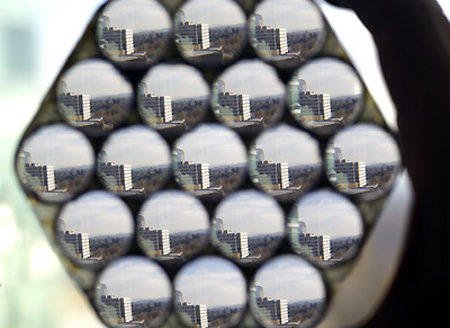 This gives and effect not entirely unlike a kaleidoscope. This particular lens has each sub-lens focused at the same position, but if they were angled away from each other they could have individual areas to form one larger image, with a greater depth of field than normal vision (meaning further periphery).

This has a couple problems that I can think of off the top of my head. Firstly, a single 'sensor' or optic disk, means you can't have several different areas of focus, but only one focus distance. I.e. different lenses cannot focus on objects at different distances unless they somehow have a way of changing their own concavity. The other big issue is the optic disk would have to be of quite a large size to create any sort of image with decent resolution. Retinal receptor cells can only be so compact.

I had a pair of glasses not to long ago which had a lens like this for each eye, and it was essentially impossible to move around, everything just looked so confusing, so obviously your creature will need an optical lobe more adepts than a humans to make sense of the image. Over all, I think the eye would be quite impractical, probably very large, and not good for any sort of predator as depth perception would be chowdery (that's a technical term) at best. There´s a reason flies and such use their eyes mostly as motion detection and not as their main sense for navigation.

The other answers already mentioned polycoria. However, unlike Cognisant's answer, this is a known and well documented malformation of the eye in humans. You can google that word and look for images to see it for yourself.

The wikipedia article for it is very lacking, so I went looking for other sites. I found something on Healthline. Just as with wikis, this should not be taken as the final, authoritative resource on this, but it should be enough to give you an idea of how this condition affects people.

There are two types of polycoria. These types are:

The symptoms of polycoria are usually a product of having more than one set of iris muscles. The iris is the colored ring of muscle around each pupil. It controls how much light is allowed into the eye. In polycoria, the pupils tend to be smaller than normal and separated by individual segments of iris. This can mean less light enters your eye, which can dim your vision. You may also have difficulty focusing because the pupils aren’t working effectively.

The primary sign of polycoria is the appearance of two pupils. Other signs and symptoms may include the following:

Some people with polycoria do not need any treatment because their vision is not affected enough to require it. For those whose vision becomes difficult because of the conditions, surgery is one possible treatment option. However, because true polycoria is so rare, it can be difficult to determine the best treatments for it.

One case study has shown that surgery was a successful treatment option. This type of surgery is called pupilloplasty. During a pupilloplasty the surgeon cuts through the tissue of the iris, getting rid of the “bridge” that has formed between the two pupils. The surgery, in this case, was successful and improved the patient’s vision.

So you see, true polycoria is more of a condition than an advantage for people.

I think this is not the answer you were looking for. If you want a fictional person or group of people to have a different kind of vision because they have compound eyes, you don't have to limit yourself to perfect, pedantic realism.

The description of an insectoid point of view and its pros and cons in fantastic/sci-fi literature is rare, but there are some examples nonetheless. My favorite one is from George R.R. Martin's Wildcards. One of the characters in the story, known as the Sleeper, one day mutates to have compound eyes. When faced with an enemy that is trying to kill him, Sleeper claims to see "two hundred sixteen [expletive]s". The enemy has the power to take someone's life by locking gaze with his victims, but on the Sleeper it fails because there are too many eyes to fix a stare on.

Another example is Dr. Baxter from the 80's TMNT cartoon. When he becomes an amalgamation of a human and a fly, his vision is shown as capable of tracking an object with many eyes at the same time.

One thing is for sure: if the person with multifaceted eyes has a human retina, they will, for all practical purposes, suffer from true polycoria. But if each eye has its own retina, then they have no blind spot, and effectively a super fovea. They could potentially have better lateral vision than most birds, which have a secondary fovea just for that.

It's possible, the condition is known as polycoria but having two or more perfectly formed pupils/irises per eye is extraordinarily unlikely (such a case is undocumented in modern medical history) and although this could potentially extend someone's peripheral vision I suspect their visual acuity would suffer for it.

Not the answer you're looking for? Browse other questions tagged science-based biology creature-design insectoid or ask your own question.

13
Feasibility of giant flatworm people
7
Alien Wings, a Different Design
21
Realistic fantasy slimes
9
Vertebrate-like creatures with more than four limbs
21
Under what conditions would humanoids evolve eyes in the backs of their heads?
2
Dragonfly Goggles
7
Could a Planet's Ecosystem be run by a small variety of animals?
6
Greenhouse Planet Terraforming - Will a balloon jacket self-stabilise?
6
Determining factor(s) for making creatures robust to square cubed law