What would the minimum mass of a water world need to be to form ice Vll, due to pressure, at its core? What about ice X, ice Xl, and higher?

I'm thinking of a planet in a Goldilocks zone similar to Earth's, with a similar atmosphere, and similar atmospheric pressure and temperature at the surface. Gravity would be variable, based on the mass needed to sustain the kinds of pressures to form exotic ices at the core.

I realize there are at least a couple of similar questions -

Could a planet made completely of water exist?

Your question is similar to another one I answered, and I'll be borrowing heavily from that.

I can start off the answers with some simplifying assumptions, but someone else may have a better idea of the intricacies involved in this calculation. The specific assumptions I'll make are:

With these assumptions, this really just becomes a plugging-in-the-numbers problem.

Here's the water phase diagram I'll use to talk about the rest of this problem:

Given our first assumption, I'm going to choose a balmy 350K for the planet's water and ice. In the diagram above, we can see that ice VII shows up at ~2GPa. So the question becomes, how much water does it take to get a 2GPa pressure at the core?

Well, given our second assumption, it would take 200 kilometers of water to reach 2GPa given the classic conversion 101kPa/10m. With that info, we can calculate the mass of a the planet via the equation

Cool! From here, we can see that's in the range of large asteroids or small moons.

Of course, this is fundamentally a ballpark estimate, but I'd say it's accurate to about an order of magnitude. As pointed out in the comments on my other answer, the constant temperature assumption is possibly quite valid depending on how your planet formed and how old it is. The "average" water density leaves a lot of room for error, but I wasn't confident enough in my calculus to do the full derivative (change in bulk modulus with respect to pressure as depth increases).

This one gets a lot more complicated because we're working with two shells here, but we have a similar set of assumptions:

At 350K, we reach ice X at about 50 GPa and can answer the question similarly to the one above- how thick does the ice VII need to be to reach this pressure? We already know that we'll have 200km liquid water along the surface, so the core is the only new thing here.

To get an additional 48 GPa due to Ice VII, we need approximately 2000 additional kilometers:

Take this estimate with a large grain of salt- $g$ wouldn't be constant through a planet's core, but it would rather depend on the mass of the planet and the distance from the surface, which means we're into those nasty differential equations again. Man, no wonder physicists are angry all the time.

With this, we can again calculate our mass with the equation:

which, if we plug in our numbers and solve it correctly, returns

Which is about as large as the biggest moons and in the range of the smallest planets. Good question!

I decided to write a program to calculate this. It iteratively builds a planet from the core outwards in one-meter layers, calculating the gravity and adjusting the density of the current material for the pressure at each step.

Using the same 350K planet, presumed bulk moduli, and phase diagram as Dubukay, I get the following planets:

It turns out that even relatively low-mass ocean planets are capable of forming some of the exotic ices you name in their cores. Ice VII appears to form at the centers of planets of $0.015M_{\oplus}$ (Earth masses), while ice X forms at the centers of planets of $1.256M_{\oplus}$. Interestingly, despite the increase in mass by two orders of magnitude and the increase in central pressure by a factor of 25, these worlds have radii differing by only a factor of four. While there may be a temperature dependence, given the relative simplicity of water's phase diagram at $\sim300\text{ K}$, I suspect this should not be an issue, and the relevant equations of state are not temperature-dependent.

Since we have two competing answers (Dubukay's and Mark's) with vastly different results, I thought I would add a third method to see if I could come up with something similar. I went to Seager et al. 2008, my favorite set of models of the interiors of terrestrial exoplanets. Their setup assumes that the bodies are isothermal at low pressures - as Dubukay did - and uses equations of state of the form $$\rho(P)=\rho_0+cP^n\tag{11}$$ where $\rho$ is density, $P$ is pressure and $c$ and $n$ are composition-dependent constants; $n\approx0.5$ for most terrestrial worlds, but it does differ, which is important. This equation is essentially a modified polytrope, with the one major change being that $\rho(0)\neq0$, which would be true in a classic polytrope. For a pure $\text{H}_2\text{O}$ planet, $n=0.513$ and $c=0.00311$. When using these constants, bear in mind that pressure is in pascals, and density is in kilograms per cubic meter.

We can check these results a different way: by numerical integration. The structure of any planet is governed by two key equations: $$\frac{dP}{dr}=-\frac{Gm\rho}{r^2}$$ $$\frac{dm}{dr}=4\pi r^2\rho$$ These are the equations of hydrostatic equilibrium and mass continuity. $r$ is a radial coordinate, measured from the center of the planet, and $m$ is the mass enclosed within $r$. By modeling the planet as a collection of progressively larger shells, and knowing the value of $P$ and $m$ in any given shell, we can find the value of $P$ and $m$ in the next shell via the Euler method: finding the change in these variables by multiplying their derivatives at a point by some step size $\Delta r$. This is essentially what Mark did, I think. I'm simply using a particular equation of state, rather than a bulk modulus.

I wrote some fairly simple code in Python 3 to accomplish this. It only requires NumPy (as well as Matplotlib for auxiliary plots).

Here is my numerical integration code. It's written specifically for water worlds, so the equation of state parameters are not function arguments. If you want to, it can be generalized easily enough for any composition.

I chose a central pressure of $P_c=2\text{ GPa}$ for ice VII and $P_c=50\text{ GPa}$ for ice X, as Dubukay and Mark did. For both cases, my results agreed with Mark's to within an order of magnitude; the discrepancy with Dubukay's numbers still remains:

Both of my ice VII models agree very closely with Mark's, and my ice X models are only off by a factor of a few. The numerical integration does not match the analytical models, which worries me a little bit, but the discrepancy is not overly serious, and I'll do some poking around to see if I can find the problem. I'm happy enough to get within an order of magnitude in astronomy, so I'll consider all of this a victory. Here's a plot of my analytical results, with the terrestrial planets of the Solar System for comparison, as well as a curve of silicate planets ($\text{MgSiO}_3$): 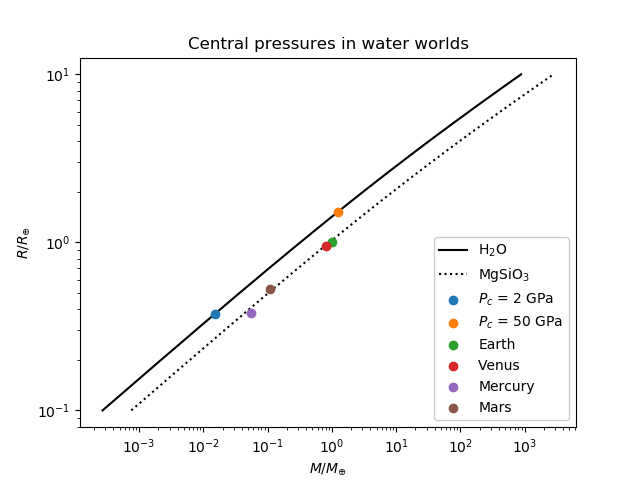 This does shed some light on the different answers because a more detailed look at the theory rules out possible reasons for the discrepancy. The equations of state I used are isothermal; the other answers assume the same. Similarly, simple plots of density within these planets indicate that the weak dependence on pressure indeed justifies Dubukay's assumption of incompressibility. Both cases see perhaps a 10% change in density from the inner core to the surface - hardly enough to cause a discrepancy of three orders of magnitude. Indeed, at these pressures, most worlds should be quite incompressible.

I suspect that the key problem with Dubukay's answer is the assumption that the pressure-depth relationship doesn't change based on depth - and it likely does. By plotting the density inside each planet, we can see that it changes only slightly for the ice VII planet and a bit more for the ice X planet: 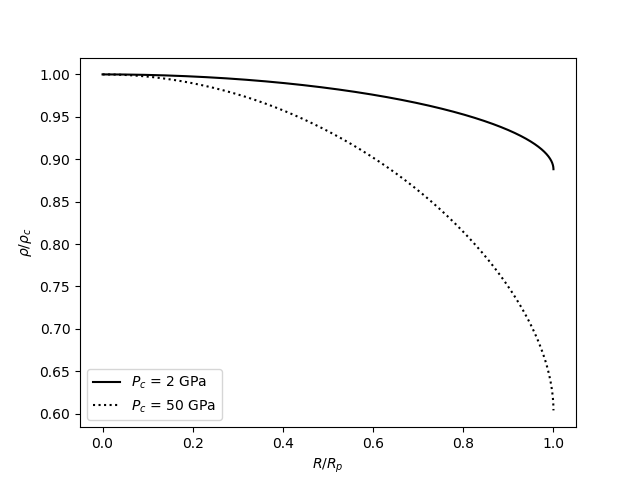 Now, the gravitational acceleration $g(r)$ at a radius $r$ scales as $g\propto\bar{\rho}r$, where $\bar{\rho}$ is the mean density inside $r$. The deviations from constant density are small for most regions onside the planet, so we should expect $g(r)$ to be fairly linear, and it is (closer to linear for the ice VII planet, which has a more uniform density profile): 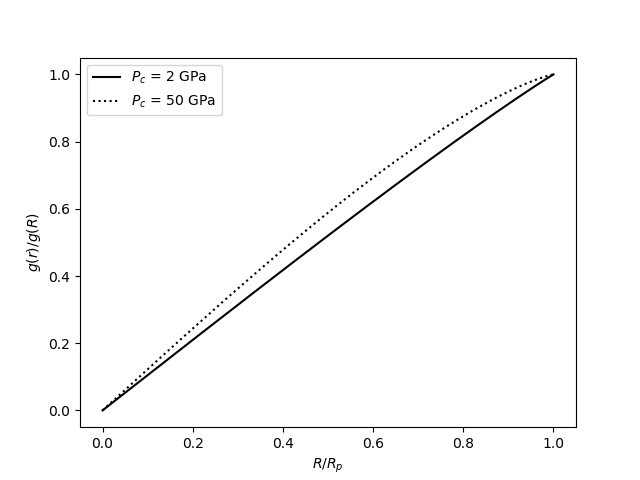 Therefore, the simple depth-to-pressure conversion is inaccurate far from the surface. I also suspect that the core-ocean model is a little too simple.

126
Could a planet made completely of water exist?
100
Would a Moon made of water pose a threat to Earth during eclipses?
25
What's the biggest reasonable natural planet or moon with Earth-like surface gravity?
13
What would happen at the core of a water world?
7
How big could a water planet be and not have an ice core?
4
Could a terrestrial planet have water for a core?
5
How to find the density of a planet and its core taking into account the gravitational compression in them?

2
A Blue, Drenched Mars
7
Weather Effects in CO2 + Methane Atmosphere Planet?
3
Creating a Cold Super-Venus for a story
9
What plant colours other than black could be available on a red dwarf planet?
3
What would be the chemical composition of the crust and core of a planet comprised primarily of diamond?
6
Is it possible to have a planet with earth-like mass but double the atmospheric pressure?
2
Ways to increase temperature and still be habitable by humans
7
Is there a plausible way to have a Gas Giant with two or more earth to mars sized moons orbiting it in the Habitable zone?
3
A Seafloor of Ice and Rock: Ice VI / Water Boundary
6
Atmospheric pressure in an almost empty world with a specific habitable zone far above the ground