All Else Equal, would certain human types be better suited for living in an Ice Age? [closed]

Simulation of the following factions has begun: 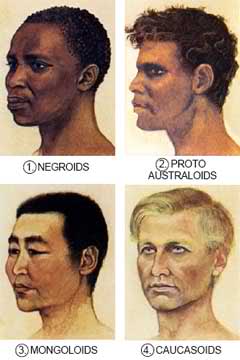 Let me start with some disclaimers so the purpose and scope is clear. Also it's important to read the disclaimers to keep the question from being too broad.

Disclaimer 1: I know that humans are a technology-intensive species, but the main purpose of this simulation/thought experiment has nothing to do with technology. That's why in the simulation I stipulate Technology Level: Stone Age, VARIABLE*. Meaning that upon simulation, all four factions of humans are brainwashed and given a random culture/technology level. For example, in a simulation where Technology= Stone Age(Caucasoid) that means Caucasoids, Negroids, Mongolids and Australoids are given Caucasoid Technology/Culture. That way technology and culture can be non-factors, allowing us to only examine physical/genetic attributes. I think this is the only way to do it because "Stone Age" technology is different in each part of the world. In your answer you can define your own scope as you see fit. For example, you may say things like: Generally, across all simulations ... or...In simulations where technology=Mongoloid ...

Disclaimer 2: Caucasoids, Negroids, Mongoloids and Austaloids are general skeleton types. Each one has many, many distinct ethnicities and historical cultures/technologies. In light of this, I'm narrowing the scope greatly by simply merging/averaging them. In other words, we are not nit-picking which specific ethnicity they are, but rather we are viewing them as aggregate cultural/technological embodiments of their many ethnicities -- with their technology averaged as well. Purely for illustration purposes, consider the following: say most Negroid stone age archaeological sites support the premise of having excellent sewing technology, except for a few outlier archaeological sites in this one country where the stitching is really bad or whatever, just consider Negroid sewing to be pretty good. That's what I mean by averaged. I'm not expecting an Archaeological Thesis or anything. Heck, if you think it's too complicated, then just ignore the culture/technology dimension altogether. I don't mind; like I said, I'm not interested in technology. I'm only interested in physical trait advantages/disadvantages.

From this futuristic simulation, I'm trying to answer a few inter-related questions. Namely, which traits of the factions would play a big role. For example, given the "No living in caves" handicap, unless I'm mistaken, that would mean Caucasoids would have a bit of a disadvantage because of their comparatively fair skin. Being unable to dwell in caves would force them to spend more time in the ultra-violet than their genetic lineage is accustomed to. However, I'm not sure if that would be a more of a small nuisance or a death-blow.

Question: If we uproot Caucasoids, Negroids, Mongoloids and Australoids from their respective ancestral geographic regions and force them to live in a cold ice-age world (with a few handicaps) as per the simulation above, would each faction have the same chances of success, all else held equal? Or would certain traits get in the way, what traits would be helpful?

Side Question: If you want to go the extra mile, consider answering this question too: Would each faction look the same after 10,000 years? Maybe a few would have died off?

If I had to pick one group it would be Negroids becasue most of human genetic variability is within that group, its not a big advantage but I you had to pick one group it would be that one just becasue they have more variability to work with. Of course evolution tends not to parse that way, it will be individual populations that survive and spread not wide racial groups but you are more likely to find the right combination of traits in that group.

But really all those groups will survive equally well, human variability is pretty minor, and so much will depend on other variables, like technology, location, livestock, run up events, etc. But your biggest effect will be which population was living is the most similar conditions you drop them in,the knowledge of the individual's dropped into this situation will have a much bigger effect than anything genetic.

If I drop Bob and Tom in a new environment and Bob was a hunter gather and Tom was a wall street stockbroker, Genetics matters less than the fact Bob knows how to start a fire and Tom does not.

I would say that there are not any significant differences between these groups. Not significant enough to make any difference in their ability to survive. Any trait that would prove difficult would be compensated for by some tool or clothing. Some groups would endure cold better than others. But that would probably last for just a few generations. "Asian / mongoloid" eyelids could prevent some particles from touching the eye, but other groups could just make a better hat, cape, mask or goggles.

Over time their appearance could change, probably making the darker skinned groups more pale. Generally they all should be more hairy. And "negroid" lips could get thinner. But that is about it.

I'd look at body types that already have formed due to ice age conditions: Inuits/Inuvialuits for Asian stock, and Sami for European stock. They both came out fairly differently, depending on their main food source. Inuits survived on pinnipeds and cetaceans, and developed stockier frames and insulating fat to help better keep their core temperatures up. Sami depended on reindeer herding, and thus utilized a more lithe frame and compensated with furs.

The only reasons facial features would play into any of this might be the nose, and the ability to better insulate against heat loss via breathing, but even that would be minor and probably just involve hairier nostrils.

Not the answer you're looking for? Browse other questions tagged science-based biology prehistoric-times or ask your own question.

3
Earth where all of Equidae went extinct via Ice Age... - Effects
4
Skin tones for humanoid species living on planets orbiting different types of stars?
7
What jobs would halflings be suited for in a medieval setting?
2
Could an Ice Age Extinction Wipe Out All Marsupials?
2
How would certain blood types be more susceptible to "blood bending" than others?
6
Would A Neanderthal Skeleton Be Better Suited To Handle Gigantism?