I've been working on a project and I'm trying to make it as scientifically plausible as I can get it to be. Since space is large, and it's physically impossible in this universe to reach the speed of light, people aboard spaceships would likely die before they get to the destination, or at least age.

I've been wondering if there's a plausible and safe (or mostly safe) way of preserving people as they travel through space. It doesn't necessarily have to be being preserved in liquid nitrogen or something along those lines, just anything that could theoretically work.

Cryogenics, when you get right down to it, is an attempt to slow Entropy, or the normal and constant use of energy in our bodies, which ultimately causes it to degrade. Extreme cold is useful for that because cold is essentially the absence of energy. Zero degrees Kelvin (-273 Degrees Celsius) is described as 'absolute zero' because at that point, there is a total absence of energy, and therefore nothing can ever get colder than that. (Deep space is around 3 degrees Kelvin)

The problem with cryogenics for complex organisms is that most molecular materials, as they cool, form solids and actually shrink in size. Water, on the other hand, expands as it gets colder. Water at 4 degrees C is actually denser than ice.

This is why ice cubes float in your glass of water (or Scotch, etc.).

For the purposes of cryogenics, given that complex life forms are 70% water, this effect can essentially tear cells apart.

There are some notable exceptions in nature. The Tardigrade, or Water Bear, is a small, multicelluar organism that can replace its water content with a form of sugar molecule to survive freezing temperatures and reanimate. There are even a small number of turtles, snakes and Frogs that can survive naturally freezing temperatures for extended periods through some natural form of cryogenic suspension. From this alone, we know that it's possible, but we have a long way to go before we can say that this is even a viable technology for space flight.

That said, humans (after a fashion) are already being cryogenically suspended and reanimated as a part of common medical practice. In-Vitro Fertilisation (IVF) treatments and other forms of artificial insemination rely in some cases on either frozen eggs (ova), sperm, or even Embryos that are stored in cryogenics, 'thawed' and placed back in a viable host. So, it's even possible with some human tissues as a part of existing medical practice.

The real issue is that the protective chemicals that allow certain cells to survive the freezing process are at present quite toxic as well. This means that large, thicker tissue samples, like hearts, livers, complete human beings, etc. still don't have viable recovery methods after freezing, and in some cases during freezing. Also, we've never asked a Tardigrade or a Spring Peeper if how much they remember after their freezing, and whether or not they're really still 'themselves'. The suspension and reanimation of a complex human mind with its suite of memories and 'soft', programmable set of practices (cerebral cortex) has never been tested completely and even if we can solve the biological problems, we really don't know what it would do to a complex mind just yet.

So; as I see it, in the not too distant future, there are really two possibilities that could make cryogenics plausible;

2) Development of a different kind of entropy suspension method that somehow locks out energetic interaction with the universe without reducing localised energy levels (ie; making it cold).

Of these 2, I think (1) is the most plausible, but what that chemical might be I don't know. I guess if I did, I'd be making a fortune right now, but I digress.

The answer to your question is NOT the design of a new freezing model; we have that pretty much perfected. It's the design of a new chemical or water molecule control process that would allow for ice not to expand without the treatment that allows this to happen being toxic. From a world building perspective, the place I'd start would be the tardigrade and the relevant species of frogs, snakes, turtles etc. that can survive freezing and see if there's something plausible in their natural design that can be applied to a near future state to humans.

Realistically the tech to revive a person who has been cryogenically stored is pretty much identical to the tech required to make somebody live forever since we are talking about complete cellular regeneration. If one can feasibly freeze humans and revive them again (presumably through some crazy hypothetical tier sci-fi nano tech) you could just make your colonists functionally immortal. Think less freezer-ship and more "Methuselah" ship. If your colonists can live for as long as they have access to the regeneration tech required to revive human pop-sickles they don't need to be frozen. You also wont need as many colonists since "immortal" means they could potentially have thousands of children over a very very long time span. Plus, your population will never need to outpace a death rate since you only have to replace the odd loss to accidents that render a body totally unrecoverable. which by the way, would be VERY rare since the same tech that could regenerate a frozen body at the cellular level could just as easily be used to regenerate a body from any other kind of accident short of complete obliteration or simply being unable to find and recover the body.

With a potentially infinite lifespan the colony ship can take as long as it likes to coast from star system to star system carefully building colony after colony and monitoring and assisting each one to full maturity. From the perspective of an immortal a few hundred years to the next star is not really very long. Additionally if you have that tech level you don't even need earth like planets to settle. Literally any metal and mineral rich planetoid or sizable asteroid you came across could be converted into a self sustaining self repairing artificial station Like pic related: 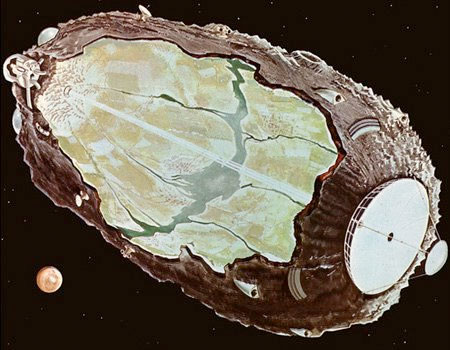 When you are immortal it really doesn't matter how long its gonna take, and again, the same tech to revive cryogenically frozen people is the same it would take to sustain immortality.

The FDA has approved a simplified form of suspended animations for medical procedures and emergency transport. It is based on the techniquevshown in these clips. Warning: may disturb some people.

This technique works for 2 hours, though the FDA think it can be extended to 4. But it's a start. The obvious first step is to switch to glycol, rather than water, as you can reduce temperatures further without cell damage.

The second step would be to extract the gut microbiome (which will try to eat you alive) and the other biomes you have. Bag them up and store those separately.

As long as the cells have some water replaced, the freeze expansion won't damage them.

Note: Some statements have not been tested in medical trials and may deviate from absolute physical accuracy.

Nonetheless, this is the approach I'd envisage.

"given that complex life forms are 70% water, this effect can essentially tear cells apart." Which is why food is flash frozen, so that the crystals are tiny and don't rupture the cell membranes as much when thawed. – RonJohn Mar 8 '18 at 0:39

The faster the freezing, the better the conservation. Maybe Pluto or even Triton are the best places to do the job. So superlow temperature flash freezing is the solution for the first step : freezing

Though the real challenge lay in the defrosting part of the process. Maybe you can figure a multi-sources/low energy/fast acting microwave re-heater... Micro waves are particularily efficient on water molecules. It aims at putting water back into the liquid state within milliseconds. The faster the defrosting, the better the chances to find somebody's mind back altogether. Well, probably

Sumary : One was turned into very low temperature ice thaks to a direct, short and terribly efficient exposition to Pluto's atmosphere. The 'body' was stored for decades. And now someone wants to meet the person : hyperspeed defrost using microwaves (and maybe some submillimeter and IR as well). Then some sleep and hypothermia treatment. Totally worth it (?)

Not the answer you're looking for? Browse other questions tagged science-fiction space spaceships science-in-society or ask your own question.

3
How Long can someone be Cryogenically Frozen?

17
How would I transport an atmosphere?
8
Death from old age stopped, with expansion to new worlds to handle population growth
3
Which of these space colonizing civilizations has the advantage in a conflict
4
Concerning Cultivation of Immortality
3
Genetic diversity in an interstellar society
6
Biochemistry (mostly) Questions for Science Fiction
9
Scientifically accurate fuel for a small spaceship
13
How to make FTL-technology an narratively interesting suicide-pact-technology?