What technological improvements need to be made to gyrojets in order for them to be militarily effective?

Gyrojets are weapons that fire rocket propelled darts,they are lightweight, they have low recoil, are very silent, and at long ranges have extremely high velocity. They however are highly inaccurate, have high visibility, and do not get to full velocity until they are 60m from the muzzle of the rifle, and ammo is expensive. These have high potential because of the fact that they can reach velocities of 1750 mph with a tiny handheld weapon, the problem is they are poorly designed so if anyone has any ideas it would be helpful, because i want to have a hard sci-fi universe with these used as a sniper or even assault rifle weapon, and if needed also a pistol.

some form of flashless propellant;

maybe some type of rocket that instantly accelerates to full velocity just before it leaves the barrel; and

some form of cheap ammo

The primary issue with a gyrojet was the high expense of the ammunition and the length of time needed to reach lethal velocity (it is sometimes said you could hold your hand over the muzzle of a gyrojet to block the round and remain safe).

To solve problem two, you need to increase the energy of the rocket propellant and release it rapidly enough that the projectile is moving at considerable velocity as it leaves the muzzle of the weapon. The primary difference between rocket propellant and gunpowder or the propellants of modern firearms is rocket propellant burns (granted at a very fast rate) to generate the gasses and create the trust, while gunpowder and nitrocellulose or more modern propellants burn fast enough to be considered explosions. The propellant charge in a 9mm or .45 pistol round burns in a fraction of a second inside the cartridge, and the expanding gasses "push" the bullet out, while a gyrojet round is still burning as the bullet leaves the muzzle and downrange to burnout at @ 60m downrange. 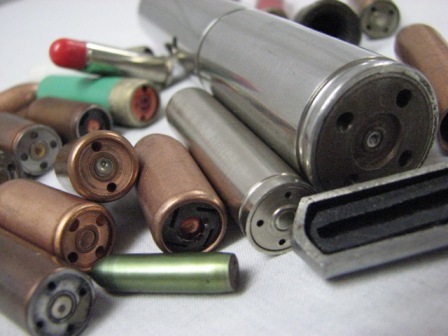 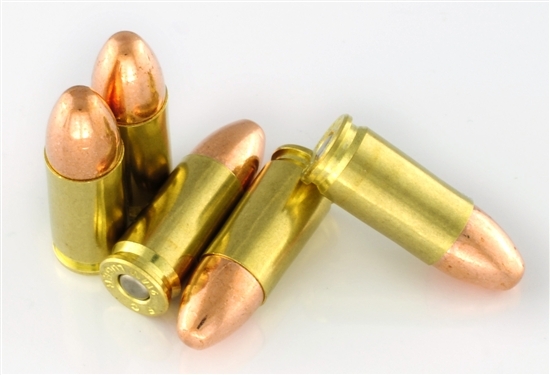 Now there is no reason you could not have a rocket like projectile using a high energy propellant that would burn out rapidly (even inside the barrel), and some of the exotic mixtures considered for caseless ammunition might perform well in this role. The problem is the massive change from solid to gas in a fraction of a second would require a very strong casing to hold everything together. In a conventional gun, this is called the chamber, and the barrel is also strong enough to deal with the rapidly expanding gasses propelling the bullet.

Conventional rifle barrel. Notice how large the chamber end is compared to the rest of the barrel

A gyrojet round would essentially be the chamber and the barrel in function, which would mean the round would be quite heavy and bulky (especially if you want to follow the gyrojet formula of a lightweight aluminum barrel). You may end up with rounds similar in size to shotgun rounds, making for a very large weapon. 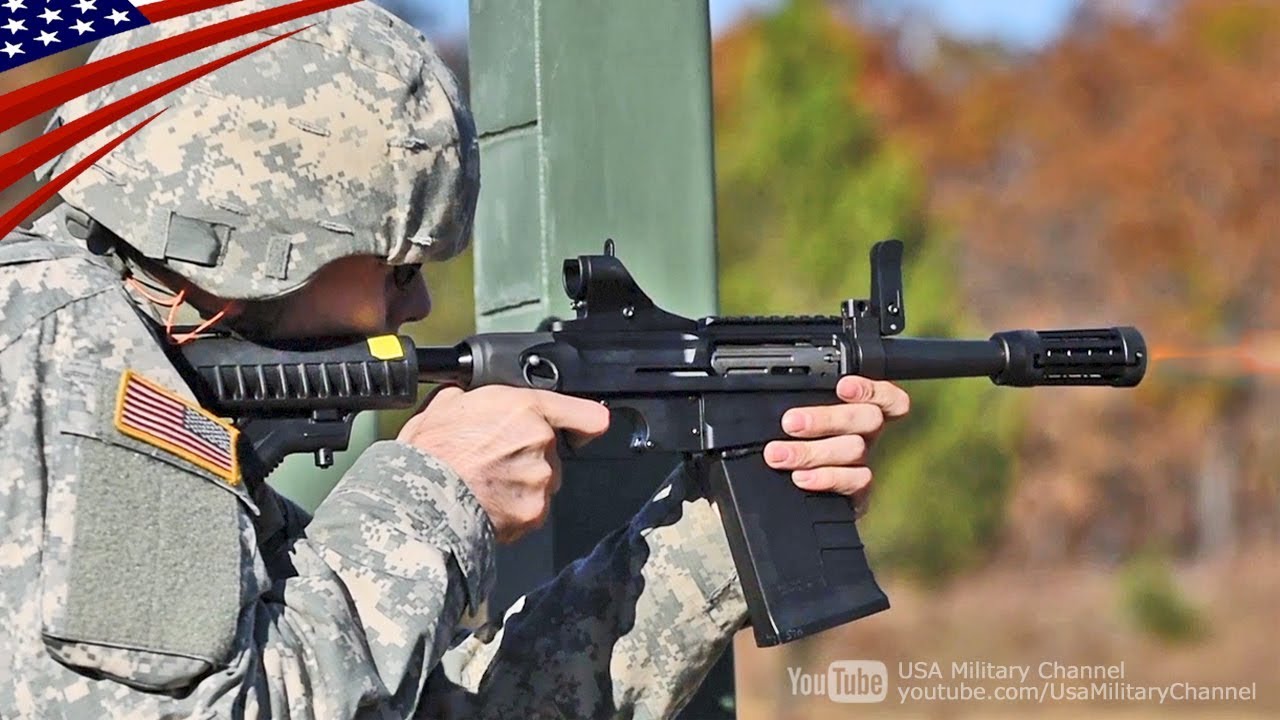 M-26 shotgun. Your Gyrojet may end up looking like this

Problem one is actually rather simple to solve. Making products in bulk through assembly line production is a well known process, and making large production runs also ensures quality control as there are greater statistical samples to draw upon when examining the process. Gyrojet rounds were essentially hand produced in the 1960's, but making millions on an assembly line would rapidly drive the price down through economies of scale.

A couple of ideas

Something like this (for the gunpowder starter charge version) but with internal fuel as well. So if you can imagine replacing the solid sabot core with a self propelled flechette.

For a ideal sniper rifle

You may actually want a slower round. Speed is not the top priority. You really want to keep it subsonic. The problem with subsonic bullets is they are losing speed all the time so they have poor range and accuracy compared to high velocity bullets. They also have less penetration. But they have the advantage of being [more]silent as there is no sonic boom. Most people think that the majority of the noise from firing a gun comes from burning the powder charge when really a lot of it comes from breaking the sound barrier.

So an Ideal sniper weapon (in my mind), would be as follows.

Ideally it would use a solid propellant that burns as clean an clear as possible. I really like the idea of having many very thin rocket chambers. Perhaps a few dozen of them, because then you could pulse the firing of them and have finer control. Essentially it would not need to use the "rockets" the whole time, only to maintain speed an course. the trick here is you cant turn off a solid rocket. You can burn 2 chambers on opposite sides for a split second for low thrust, wait and then burn one or two on the right if you need to turn to the left. Or ignite them all for a quick burst of speed. They would be high thrust but short duration. 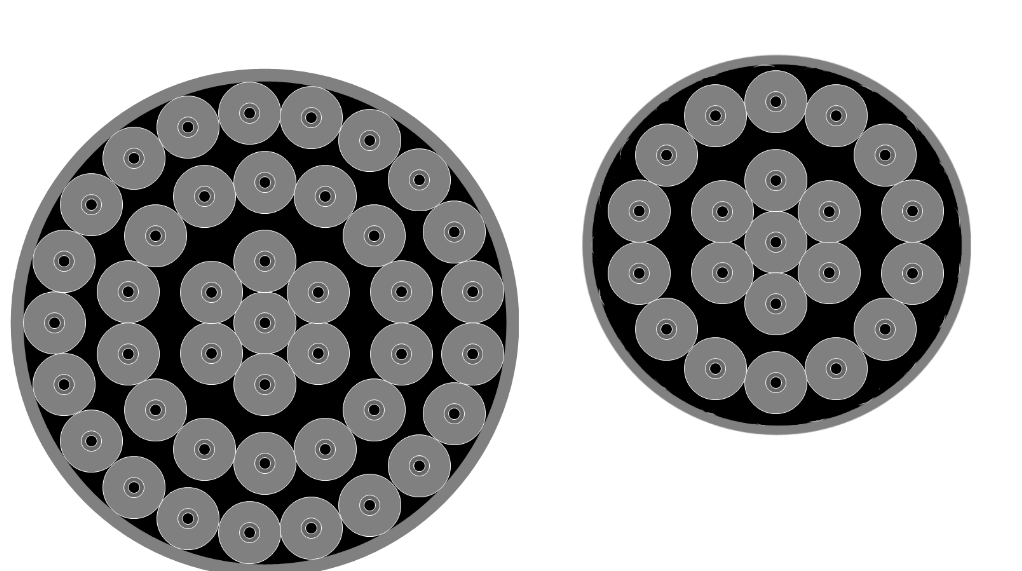 This would work almost like the sniper type/mode. The only difference here is you would essentially just eliminate the cruse phase. Mag acceleration here would help with the rate of fire and by removing heat (from propellant exhaust) from the gun barrel. The round is outside of the barrel when it's little rockets ignite.

I could imagine a coil gun with powerful magnets that you cycle. To fire the next round you just shove it out of the magazine into the first magnetic field with a physical pusher mechanism. Then you could fire as fast as you can cycle the fields and push new rounds in. This would probably need a good electricity source though, but it would me much less then a full on rail gun or laser. Sort of a composite weapon.

Last thing is because you lose the cruse phase only fine guidance would be possible at these speed. This would make the auto mode better at short range but less accurate, which is what one expects.

Your new gun is an air gun which fires the rocket ammo using pressurized air. The rocket leaves the barrel at a speed comparable to a standard firearm and then accelerates from there. Air guns this powerful exist. https://www.airgundepot.com/airforce-texan.html The gun has a battery to recharge the pressure tank, or it could be recharged manually with a pump.

Alternatively if you want to be more sci-fiey you could spin the rounds up to speed mechanically while in the gun and accelerate them out with a short railgun.

One could have an internal accelerometer which used this method to correct for deviations from a straight line. If your tech is small enough you could have an onboard camera and have the ammo steer itself towards the target.

The above modifications do not help much with that. Instead of guided accurate ammo (as a sniper would use) an assault-type weapon could use the airgun base to start them fast and dumb standard gyrojet ammo - but many of them.

Not the answer you're looking for? Browse other questions tagged technology weapons hard-science combat firearms or ask your own question.

25
How advanced or effective weapons can be created from mostly animal body parts?
2
Creating a steampunk-esque/cybernetic “Big Iron” revolver
9
Can biological material be magnetic?
7
Man-portable weapons for post-disaster Arkansan troll hunters
33
What would the proper shooting stance be for a recoil-free arm cannon?
7
Is my plasma weapon design any good?
6
Are laser-stars the better missile carriers in space warfare?
2
Why would rapid-fire firearms do less damage than slower-firing ones?