Would coil gas expansion hybrids hand gun be viable weapons in the near term future?

I have a science fiction setting that I would like to spice up with hand held sci-fi weaponry (coil guns, plasma weaponry). However, coil guns appear out of reach. Could you combine coil and gas expansion weapons? Could this combination weapon offset the known power, heat, materials (and other issues) associated with coil guns?

Context: The environment is current warfare conditions. Assume a battlefield similar the Second Gulf War. Specifically, the United States may choose to use coil guns and Iraq has the same equipment as in the historical record.

Note that these parameters are intended to guide not interfere with responses. You have license to adjust parameters to prove a point (for example change the Second Gulf war to the Vietnam War).

This gun (the M27 Infantry Automatic Rifle) already weighs 10 lb with a full magazine, and the Marine is wearing armor plates and a thick backpack full of his existing, and necessary gear. Now, imagine him standing and holding it by the barrel shroud. 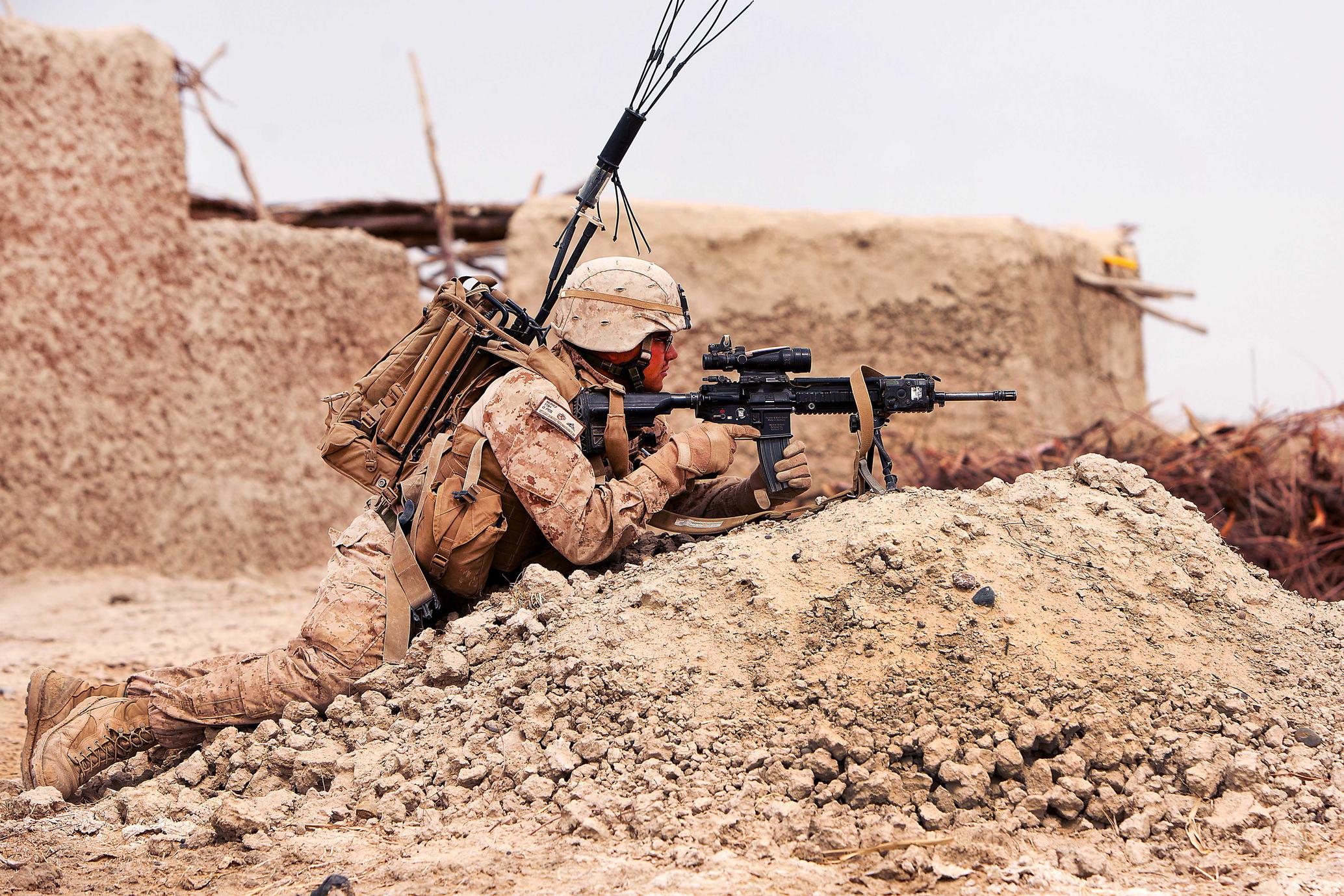 The mix would increase waste.

A bullet in a gun accelerates because the gas from the combustion of the propellant is pushing it.

If you add the coils to further accelerate the bullet, it would "advance" beyond the push of the gas, so the gas would be applying less force to the bullet and adding less to its speed. At some point, your bullet leaves behind a void that the expanding gas still cannot fill slowing the bullet.

What you could do is use the deflagration not to propel the bullet but to avoid the void behind it. But I think that, at this level of technology, it would be easier and more efficient to just make the void in the whole barrel.

There is only one way this is helpful.

A bullet is already fast enough to kill a person very reliably. A hypervelocity bullet is no help against a person, BUT against a vehicle (armored or otherwise) it becomes useful.

Your best bet is to go with something like an anti material sniper rifle, by combining both acceleration methods you could end up a true modern anti-tank rifle. It will also be easier to use, since a round will fly much straighter.

Sniper rifles are the only weapon where the added weight might actually be worth it, for an infantry weapon modern rifles are already deadly enough that the added velocity of the shell does not really add anything, a faster bullet will not be any deadlier, but an anti-material sniper rifle will actually benefit, since it can hit hard targets more effectively.

Downside as RonJohn mentioned It will be heavier, and it will need a large power source which will also be heavier. Not that that is necessarily enough to stop it getting used, It just means sniper teams will involve one person carrying a large battery.

You may want to consider a hydrocarbon micro-generator/battery, they are currently hot research and could provide the energy density to make a battery pack that is actually portable.

how to combine chemical and coil for maximum effect at minimum weight.

Combining the two methods does give an actual advantage, gas is great at low speed acceleration but have diminishing returns, coil guns can reach much higher velocity but a lot of the coil length is used just to generate the same velocity a gas explosion produced in a minute distance. Most of a bullets acceleration in a normal gun happens in the first few inches (see example) so all the rest of the barrel can be coil. Even on the most powerful rifles after the first five inches or so acceleration drops dramatically so replace or combine the rest with coil. This way you are getting the best of both worlds, without increasing the length of the gun, it will be heavier but we have had some heavy yet effective anti-armor weapons before.

Not the answer you're looking for? Browse other questions tagged science-based reality-check weapons electromagnetism or ask your own question.

7
Is this reptilian race realistic?
2
Military Structure/Chain of Command (Army)
14
How would a lack of smokeless propellant affect WW1?
1
Hand Held Coil Gun cannon - Enough to rip a giant robot limbs into pieces
17
Handling recoil of hand-held railguns
1
Handheld Weapons: Gas Expansion vs Coil Guns
13
Slow moving projectiles from a hand-held weapon - how do they reach the target?
8
Plausability of combustion light-gas guns replacing conventional guns in the future?