(I bolded the actual question, below, so if you want to skip the preamble scroll down to the bold lettering)

I am working on a world that is very similar to earth in some ways, exactly the same mass and atmosphere, slightly less water mass. The semimajor axis is about 1.05 AU, Eccentricity is 0.01 or so, with a 31 degree axial tilt. Perihelion is about 5 days after the spring solstice. Not that it's relevant, but there is a single inferior planet and two superior planets, one of which is a gas giant, named hot chi, which does pull the primary around a bit and consequently the sidereal year starts out varying very slightly from one year to the next, because I didn't quite balance the momentum of the system exactly, but it's pretty close and stabilizes after a few decades. The world itself is Home:

I would like to determine in approximate terms what the growing season is, presuming earthlike crops. I found through wikipedia that photosynthesis has a linear increase in effectiveness from 0 to about 100 watts/meter^2 , and is flat after that (and in fact decreases at some level).

I am considering a settlement at 50 degrees north, 90 degrees west (0 degrees longitude defined to be the longitude exactly away from the sun at the spring equinox).

After orbit simulation, taking a sample of solar power at the equator and at 50 degrees north yields an interesting plot, y axis is in kilowatts per meter^2 : 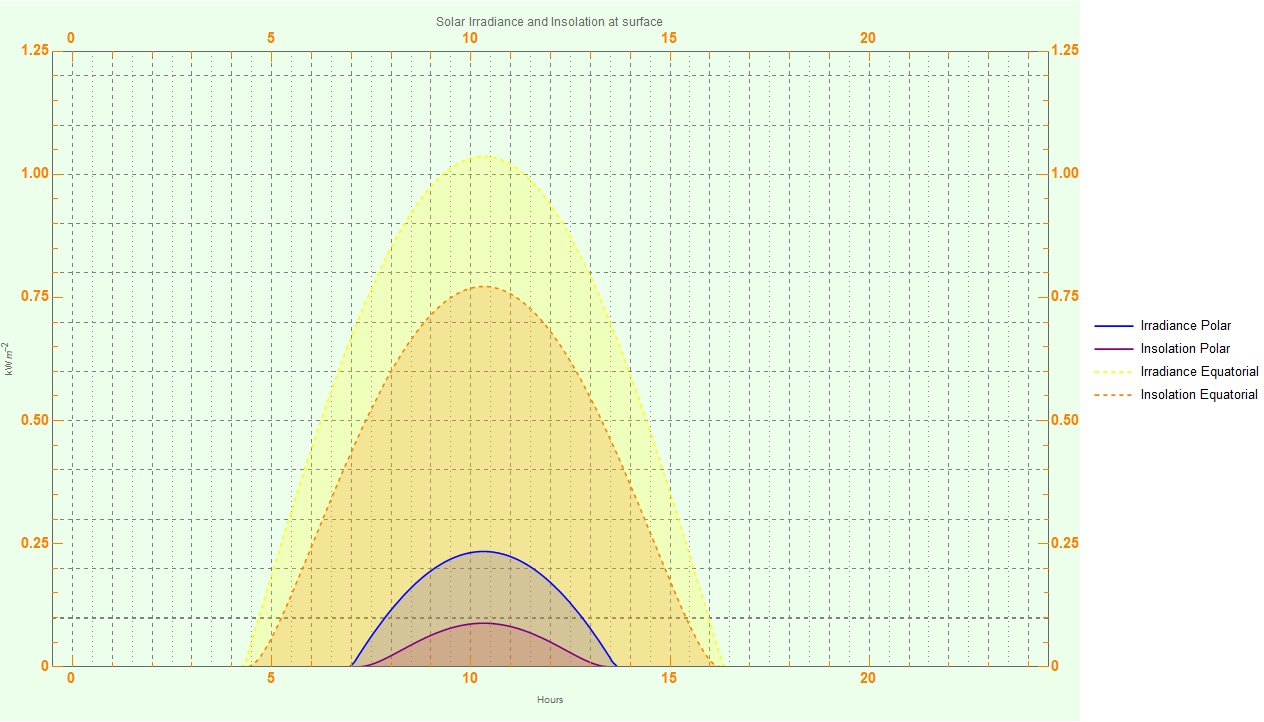 This surprised me. There are a lot of other factors in the growing season, such as temperature, but in terms of energy available it doesn't seem like the growing season would be dramatically reduced from the Earth, and in fact given the slightly longer year (just over 405 24-hour days) may actually be a bit longer than the equivalent latitude on Earth.

But, it's not quite as simple as that, I'm sure. So the question is: given the data that I have available and can compute, can I approximate a growing season? If so, how? Is there data on how much energy earth crops need to productively grow per plant, and how much photosynthesizing leaf area each plant has? I presume leaves will be at random angles to the sun and some will shadow others and I'll have to work out a model for that, but right now I'm just trying to look at it from an energy availability point of view. Thanks!

For the curious, solar energy through the year at the two points. Each of the two points has two curves, one for irradiation at the top of the atmosphere and the other corrected for air mass and presumed to be at the surface. Time should be advancing at about 24 days per second, or one day per frame:

And amending the question with a little more information, here is a map of the seasons over time and the distance of Home from its primary in the lower right panel: 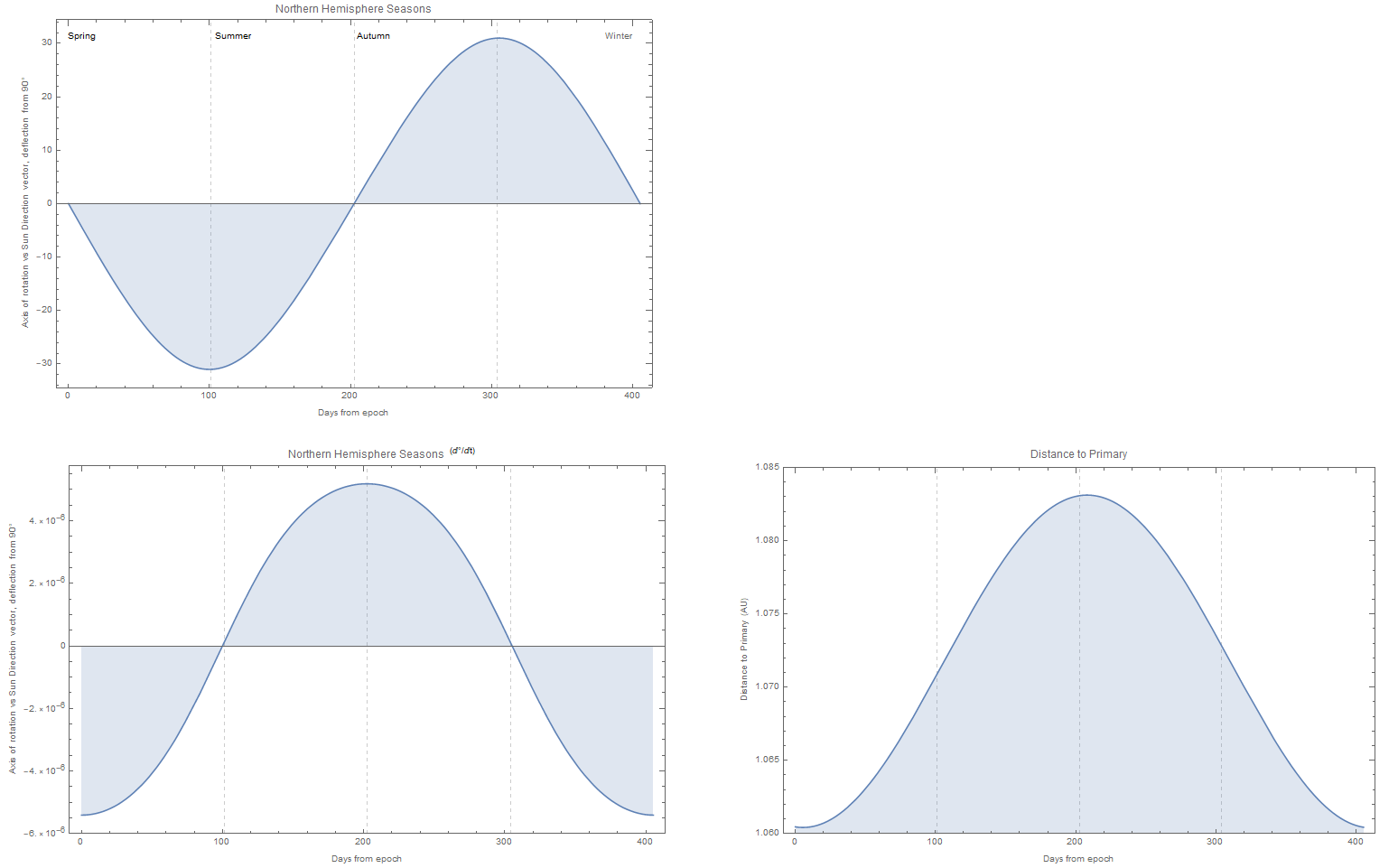 It does seem that temperature and other climate factors are probably more important than availability of sunlight. Given that, is there a simplified approach to modeling the climate (even if in general terms) or is it necessary to attempt to adapt a GCM to this world?

I don't think any of the information you give can be used to predict a temperature range on planet home, let alone model a cycle of agriculturally viable climates.

Maybe my logic is flawed, but I think the fact that we struggle to explain the differentials in climate here on Earth should be an indicator of this. Causally linking changes in the amount of solar irradiation (of which I believe there were none) to climate change is a challenge.

Extrapolation of the climate on a planet from the astronomical arrangement of its solar system would appear to be impossible, and even if it weren't, very low confidence.

You did say the planet is very similar to Earth, in some ways. This could narrow down the temperature range down to a few thousand degrees, if given some very specific constraints, and a lot of more information.

Maybe an indicator of this would be the fact that the recognizable cycle of farming seasons we have now has only been for a few thousand years old. And it's very possible the very advent of agriculture has affected the climate that made it possible. There have been ice ages on Earth.

I guess you could say the planet was in fact, identical to Earth, and start with initial conditions based on the Earth today, and then create a model based on the geology of our Earth, but I feel like at that point, there's no real reason to do this, and it would seem very contrived.

What you could do instead is conjure up a planet with a climate (or a cycling pattern of climates) and then give an explanation based on the information you've given and the geological features: working backwards, essentially, choosing a model that fits the data that is convenient for you.

Not the answer you're looking for? Browse other questions tagged earth-like climate farming .

11
Arctic Airships, Part 1 - Generating Electricity
5
Arctic Airships, Part 2 - Navigation
4
Seasons on a circumbinary planet
4
A summer colder than winter?
0
What would make a planet have 8 discernable seasons?
0
ELEVEN Inner Planets?! What Will the Ice Ages Be Like?
10
What would change a human society's chronotype?
2
What rough climate and/or biome classifications would I assign to a planet with 31.1 degrees axial tilt?
2
Does my climate map work?
4
Valleys of Eternal Night on 0 degree worlds