What would the changes necessary for powered flight using rib-derived "wings" look like?

I'm working on a humanoid vertebrate species that I'd like to be capable of true, flapping flight, but still have arms and legs completely separate from the wings. I also wish to avoid a "six-limbed vertebrate" scenario, since it has a number of fairly closely related species that only have four limbs. So, I've locked onto the idea of rib-supported skin membranes like the ones that lizards of the genus Draco use to glide.

I know one question here already addressed the possibility of a similar set-up, but I'm working on the assumption of possibility and wanting to know what the changes required would look like. In particular, I want to know where the flight muscles for such wings would be located and whether, once flapping flight was evolved, a horizontal stabilizer like the Draco lizards' gular flag would still be necessary, but help visualizing any other prerequisite changes would also be appreciated.

If it matters, the species in question is a sort of warm-blooded pseudo-mammal, and the range of motion for its spine is more mammalian than reptilian.

Lizards breathe using their intercostal muscles - the muscles between the ribs. This (in essence) moves the ribs back and forth, changing the body volume and producing inspiration and expiration.

Linked is a movie showing slow motion fluoroscopy of a lizard breathing. 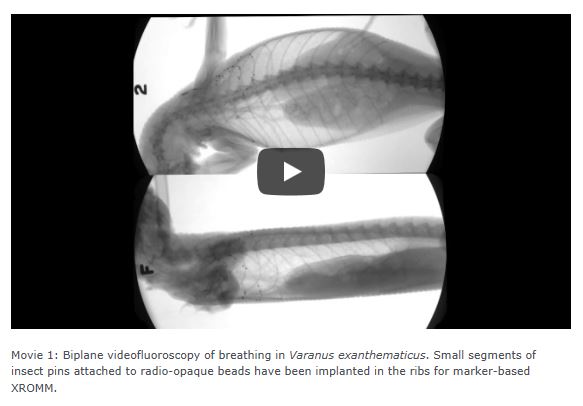 It does not take much imagination to turn this motion into flapping. One could unmoor the muscles from the sternum anteriorly and use the two sets of intercostals to power the rib wings up and back. Or one might have an elastic connection to the sternum - the lizards power the wings up (dorsally) with the intercostals against this elastic resistance, and then get a powerful downstroke when the muscles relax and the elastic connection to the sternum pulls them back ventrally. Vice versa would work too - elastically drawn up then powered down.

The linked site lays out the various motions of the ribs during breathing. They actually rotate some as well. It would be a good thing for a flapping flyer to rotate the wings on the upstroke to offer less resistance then rotate back for the downstroke to maximize resistance. I take away from the site that the intercostals are responsible for rotation as well.

Lizards already have their intercostals doing double duty - both breathing and locomotion. I think this use would actually augment breathing while flapping - which seems to me a good idea giving the energy / oxygen demands of flapping flight.

Without some mechanism to generate lift, i.e. by flapping, flight by the use of rib extensions is basically impossible. They can be extended, but in Draco the wings are fixed.

However, you can possibly develop some form of "false" ribs, by employing a novel joint above the ribcage, perhaps attached by cartilage and ligaments to lengthened neural spines. This would allow you to anchor "pull-up" muscles to the longer neural spines. To get around needing deep breastbones for the chest to anchor muscles to pull the wings down (take a look at a pigeon skeleton, their keels are huge relatively speaking), they could have anatomy that automatically forces the rib-wing, once extended to want to fold forwards (have the tips meet in front of the creature) so that the major force would be from the spinal process muscles pulling the wings back and open and anatomy pulling them closed. Sort of like a clap, where the effort is in you drawing your hands back, not in bringing them together.

Also, unless the creature is very short-legged, I don't think you're going to have enough body length, even if you took the rib wings from behind the shoulders to the hip to give you an adequate wing to mass ratio for flight or gliding, a human torso is too short to fit a wing that can support the heavy head and legs, the legs make the whole thing too back-heavy.

If you are okay with "rib_like_" structures, you might be better off attaching the extensions to be above the spine themselves. They can still use the neural spines to anchor muscle, but the down-stroke force would have to be generated by muscles pulling the ribs downwards. And you end up with a flier kind of like this:

Versus a regular six-limbed sort of flap (it's big so I didn't past it in). https://imgur.com/4Vje41e

But again, note how much length is given up to be a continuous wing to let rib-like projections work. I think this version is much more anatomically feasible than the first option, fitting the rib sails directly above the ribs to the sides of the spinal process. Though you might end up with a humanoid creature that is built very deep and broad of chest, with a buffalo hump. They would be humanoid but not humanlike in shape.

The "buffalo hump" need not stand out. Buffalo have their hump because their neural spines are tall to support the weight of their heads. You can see the same with rhinos, which do not look particularly humpy, but have tall neural spines as well.

5
Dragon with pseudo-wings, is this viable?

6
Great Flying Cthulhu
10
Alien Wings, a Different Design
7
Creating a Scientifically Semi-Valid Pseudo-Arthropod Primate Part 1: Pseudo-Dragonfly Wing Rib Muscles
4
Is this humanoid dragon realistic the way I’ve imagined it?
6
A dragon, a gryphon and a tengu are flying toghether. How can they actually communicate?
8
Scaling up the bat wing: still a good alternative for a large flying animal or inferior to a pterosaur wing?
5
Explaining Dragons
5
Dragon with pseudo-wings, is this viable?
3
Could the Classic Wyvern exist as a Tetrapod?
5
Could membranous wings work along with an exoskeleton?