Based on a local legend, this species of dragon can't fly, but instead covers itself in flame to protect itself from hunters.

With as little magic as possible, would something like that be possible?

More details about the creature:

My question is: How could a creature like this exist?

Magic is allowed, but I'm trying to avoid using it as much as possible. 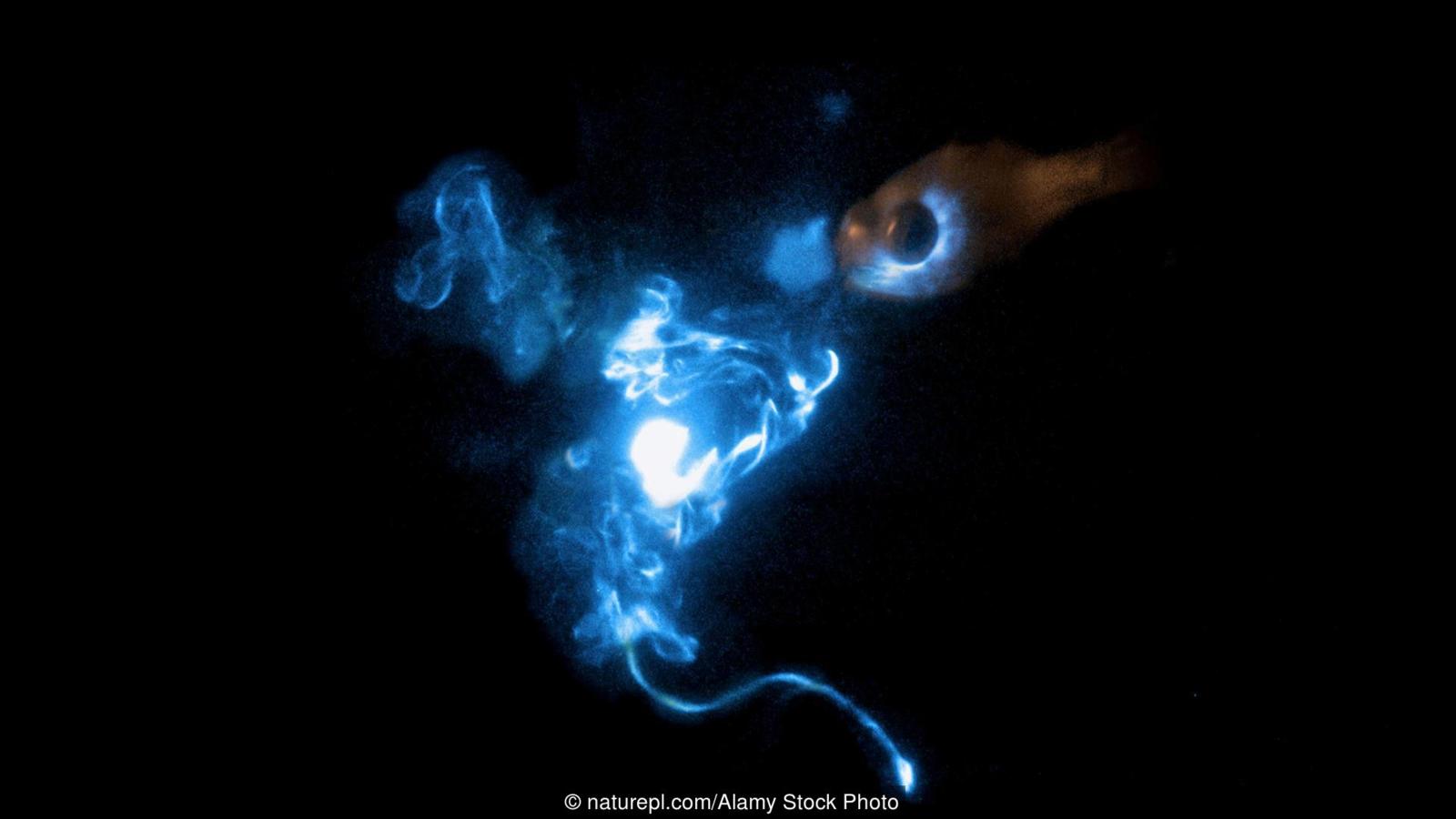 http://www.bbc.com/earth/story/20160526-the-organisms-that-glow-brighter-than-any-other A cardinalfish (Apogon sp.) spits out an ostracod after it triggers a flash of bioluminescence (Credit: naturepl.com/Alamy Stock Photo)

But Gerrish has found that the threat of attack provokes the most blinding >bursts of light. "The brightest luminescence of the ostracod is produced when they are preyed upon," says Gerrish. "The ostracods release large amounts of both luciferase and luciferin, which mix and light up the outline of the predatory fish."

This flash-bomb tactic could be some of the brightest bioluminescence in the ocean.

So too your dragon. It is not on fire, but produces a fire colored flashbomb effect when under pressure. Hopefully it makes use of the time bought to counterattack, or slip way.

All thoughts of evolution & practicality aside, I'll assume that the firedrake exists in the context of the given world and look towards one possible answer* to the how.

Some points to consider:

Alcohol is the key to the firedrake's success! 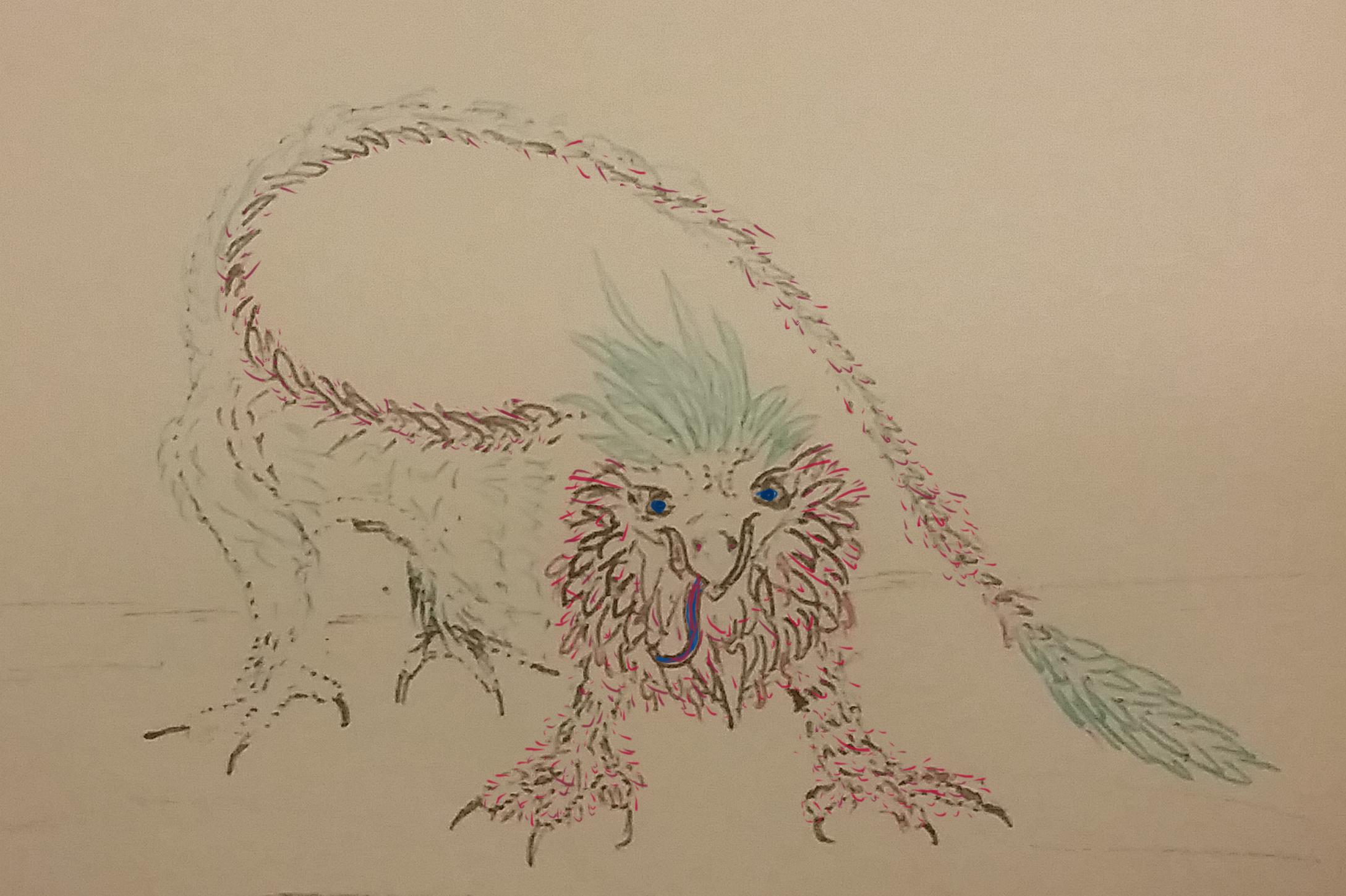 Most people think that dragons subsist on a diet of naked virgins strapped to a post outside their caves, but this is a base canard. Being of neo-reptilian kind, your basic dragon, as do its lesser kin the monitor & the iguana, likes nothing more than to chow down on fruits & leaves. Perhaps with the occasional virgin to round out the diet. In order to digest all that plant matter, deep down in the complex digestive history of the dragon is the lowly microbe. The native flora of the dragon's gut loves to break down all those carbs, most of the byproducts of which process the dragon uptakes into its bloodstream.

But there's a catch! All that alcohol has got to go somewhere, and the dragon's response is to utilise it in conjunction with once of its most ancient defense mechanisms: grease.

You see, dragons when cornered by adversaries will face off, mouths agape (to show off teeth and huge impressive jaws) & legs spread wide. The secretion of an oily substance along the forelimbs and flanks serves to create a slippery surface that predators and foes alike will find difficult to grasp. Evolutionarily, this pathway derives from an ancient scale-protective secretion that kept ancestral dragons dry when swimming and during severe weather.

Now enter the alcohol: a specialised system of bladders contains the dragon's supply of both oily-grease & also alcohol. A system of efferent vessels lead these substances to ducts along the dragon's flanks and forelimbs. While the oil is secreted generally from pores along the ventral surface of each scale, the alcohol is only secreted in strategic locations --- those parts of the dragon that another creature will be directly facing. If the creature is a terribly predatory monster, the secretions are released and the alcohol is set alight by scraping of its broad scales --- those are the bigger, thicker defensive scales. These are tough, almost stony iron and quartz rich deals that easily spark when flared by muscular contraction. The sparks light up the alcohol which doesn't harm the dragon because these scales are so thick. But other creatures fear the light and heat of their most ancient enemy: Fire!

Fun fact: part of the evolutionary story of the firedrake, as opposed to other kindreds of lesser dragons, like the monitor, is that defense is nòt the original impetus for the mechanism. Mate selection: that's where it all starts!

You see, young dragons don't produce sufficient quantities of alcohol until they are nearly mature, and their scales are not sufficiently hardened & mineralised until some while after that. The inability to autoinflame is a sure sign of sexual immaturity. But once the firedrake becomes old enough, it will light up and go looking for a mate. Various breeds and kindreds of firedrake have characteristic mottling and patterns of "fire lines" along their limbs and flanks. Male patterns are visually more striking; females tend towards an all-over glow.

(*NB: this is how firedrakes are in The World: but they are generally rather smaller - - - nothing like your impressively huge 12 yard long monsters! Just some food for thought.)

The bombadier beetle uses a hot, chemical spray to ward off predators without hurting itself - if a dragon had similar glands under its scales, it could raise its scales and release a cloud around it of boiling, noxious gas that would burn anything next to it. It wouldn't light up though.

In order to get flames, we either need sparks, a stronger exothermic reaction, or something that ignites at lower temperatures.

If we keep the glands under the scales, but fill them with oil or alcohol - something easy to produce and flammable - and then give the dragon some way to ignite it with a spark when sprayed from under the scales.

Hydrogen gas is an option, too - it could be generated from the dragon's stomach acids.

Since dragon scales are famously hard, iron pyrite might do the trick; if you want something a little more exotic, then the eletricity-generating organ similar to electric eels or electric rays are able to deliver enough voltage to generate a spark - they do not spark in those animals, the dragon would need specialised conducting elements to generate a spark.

Something like sodium peroxide + zinc + water will produce a reaction strong enough to burn, but due to the sodium hydroxide being strongly reactive with water it will be difficult to produce or contain inside an animal. The other highly reactive metals (lithium, potassium) have similar problems.

The problem is that carbon disulphide is highly toxic and a strong solvent, so it would be impossible for the dragon to store. It would also be impossible to manufacture - most processes for creating it involve temperatures above 600 degrees - so the dragon would need to find a source (e.g. volcanoes), and could not produce it on demand.

Most of the above prioritise reaction speed, so the dragon can use it as a defence mechanism on demand. There are some other processes that might be able to be controlled appropriately or hand-waved away so cover the dragon in flames. A good example is pistachios, which will, all by themselves, catch fire and burn if enough are stored together in a humid environment. If a dragon were to have a pistachio-shell-like compound in a special organ near its skin, where it can control the humidity and oxygen (and thus, the temperature build-up), it may be able to have a reservoir of burning material it can either expel or use to power one of the processes above.

All these answers are pretty good, but there is another possibility that I don’t think has been mentioned...

If you take a flammable gas like methane, and pump it into water as it freezes, you end up with flammable ice. Cooler still (heh, puns), you can actually hold this ice in your hand as it burns, because the water shields you from the heat.

So am I saying your dragon should be covered in methane/ice? No, well maybe, that’d be cool, but that’s beside the point. What if your dragon naturally made a sticky sort of mucous that was secreted out of its skin. The top layer of the mucous could be as simple as fat and/or sugar based compounds from the dragon’s diet, while the bottom layer could be as simple as some kind of water based slime. Now all you need is a spark, maybe from specialized scales, fire breath, a special organ, all of which were mentioned in other answers and boom, your dragon is covered in flames that will burn until the fuel is gone and then self extinguish once they reach the water based slime coating the dragon’s scales.

This assumes your Dragon has a breathe weapon.

Dragons have evolved to produce a modified version of their breath weapon fuel that secretes between scales. This primarily occurs as part of fight or flight response in dragons. This gooey substance quickly spreads into a vast network of flames covering the dragons body. As we all know when a dragon feels threatened, the first response is to face the threat, show the threat your dragon teeth, and then intimidate further by displaying your royal fire which ignites your burning goo covered fireproof scales.

You're asking about the eternal flames, but you're forgetting that it's a flaming, nocturnal carnivore. That won't work. Its prey would see it coming from miles away: it's nighttime, and this huge thing is on fire! Your dragon would starve.

The question is borderline closeable with "unclear what you are asking". I'll fill in the gaps with wild assumptions from the top of my head.

For example, if the beast uses this strategy to escape hunting, then it is preyed upon, either by other animals or by humans.

Also, of the creature evolved such a specialized form of defense, it was probably in lieu of the usual defenses, i.e.: camouflage, speed, flying (mentioned in the question), a hard carapace etc.

The trope that they won't get you if you are on fire may seem like genius at first. It was probably invented by Dan McNinja circa 2006. 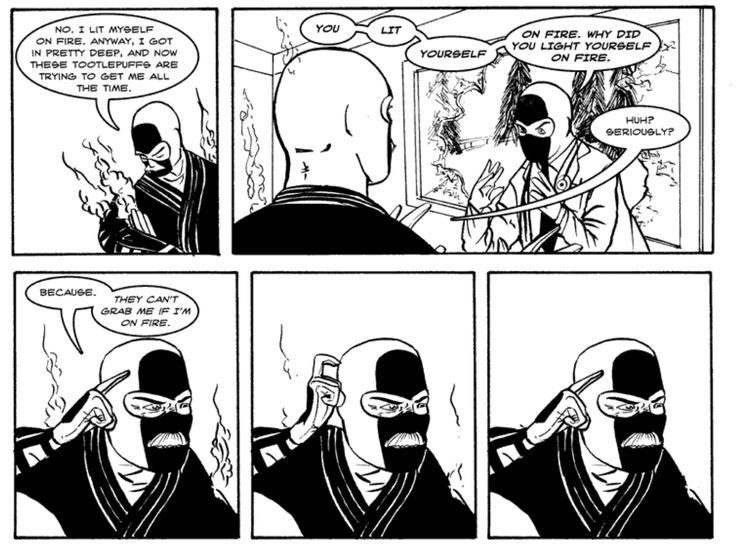 However, while this solves one immediate problem, it has some limitations, and also introduces a number of other problems.

If you still want to go with such a creature, just remember that combustion needs fuel, relatively high temperatures and oxygen (or an alternative oxydizer) to be stable. You can get the latter from the atmosphere as long as the creature doesn't get into a tight place. The other two, fuel and temperature, could only be provided by magic. That, and the ability to withstand the fire, are the minimal magic requirements - though you may want to consider the bits about water that I've mentioned for magicking away as well.

Not the answer you're looking for? Browse other questions tagged biology magic creature-design dragons .

2
How effective is magically inflamed food in a fight against medieval guards?
27
How to build a fortress to survive against mythical creatures
4
Anti-Dragon armor, shields and melee weapons
11
What features would a pirate ship need to be able to support the weight of a dragon and cargo?
12
How could dragon society avoid interacting with humanity?
1
How could a pre-emptive attack on dragon make sense?
2
How would a "flaming collar" work in an animal and how could it be useful?