What makes a dragon's scale so tough?

Many fantasy stories involve some variation of a dragon, and while there's a lot of variation in whether or not they fly, if they can breathe fire, how magical they are, etc., the strength of dragon scale is almost universal. Often, it is the hardiest material in the setting. My question is, by what (biological) means can a dragon grow scales as strong as, if not stronger than, iron or steel?

The scales are made of the same material as Limpets teeth.

A team led by Asa Barber from the University of Portsmouth collected samples of the limpet Patella vulgata in Southampton, U.K. and found that their teeth contain a hard, iron-containing mineral called goethite, which forms in the animal as it grows. Furthermore, these thin, tightly-packed fibers of goethite are encased in protein.

To measure the strength of this resilient composite structure, the team turned to atomic force microscopy, a technique used to pull materials apart at the level of an atom. Limpet teeth, they found, have one of highest known strengths—exceeding that of many engineering alloys even. The amount of force it can withstand before breaking (called the tensile strength) ranged from 3.0 to 6.5 gigapascals (GPa). That’s comparable to a single string of spaghetti holding up 3,000 half-kilogram (1.1 lbs) bags of sugar, BBC explains.

This tensile strength isn't related to size so it could be scaled up with no problem. The biggest thing would be the shape:

The whole tooth is slightly less than a millimeter long but it’s curved, and its strength and resistance to failure (even while grinding on rocky surfaces) is dependent on both the shape of the tooth and the material.

Since teeth and scales aren't the same, they will be a different shape which could make them weaker or more prone to breaking under pressure. Which would make dragons killable, while still requiring a great deal of luck and skill.

I like Dan Clarke's answer a lot. I will provide a similar one.

The most common pet turtle in the USA is the red-eared slider. 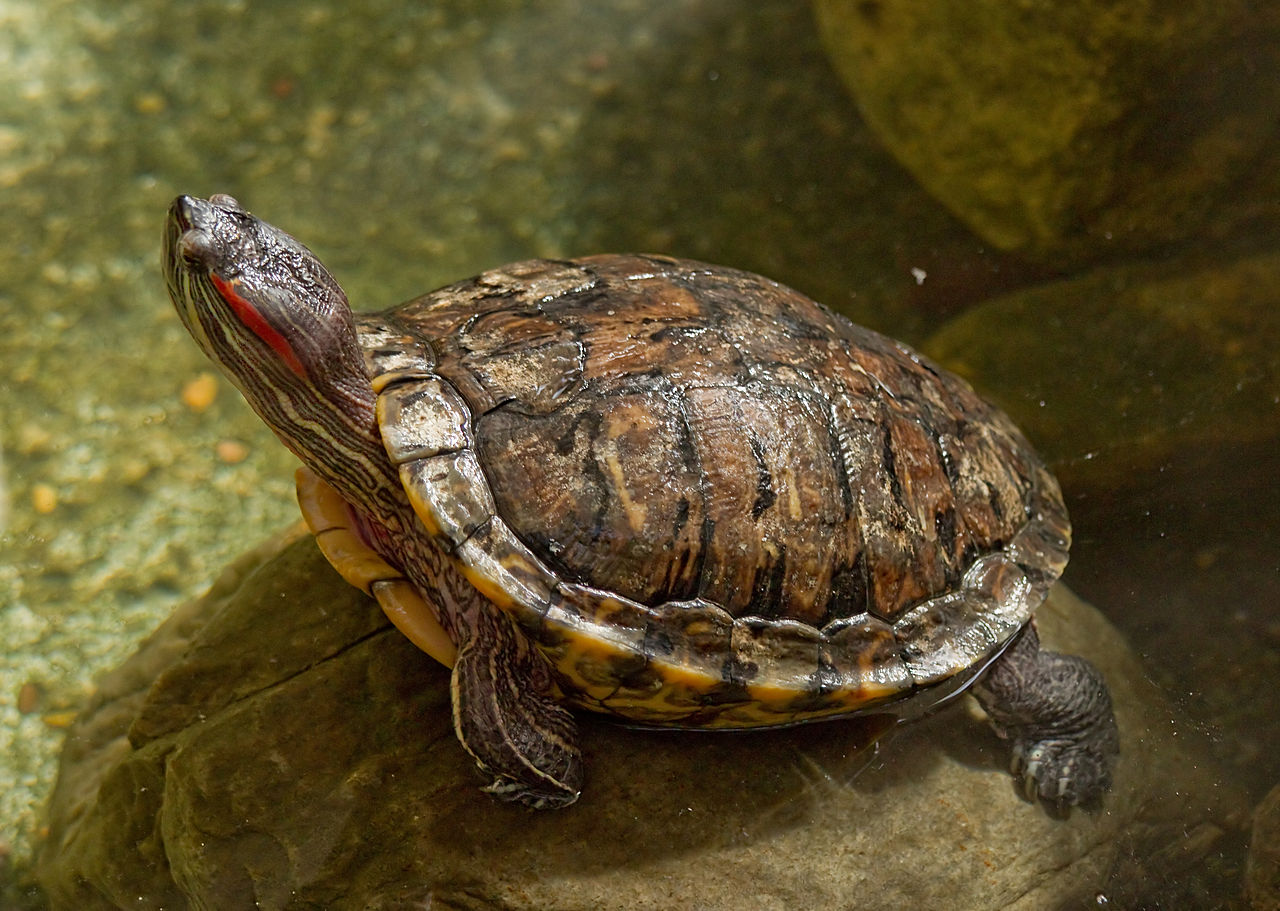 These buggers are usually 20 centimeters long. That isn't even ten inches. Now, some mad scientists have done science to them. Here's a paper on them:

(...) They measured the mechanical properties of the bone fibers by using a nano indenter with the results of elastic modulus ∼20 GPa and hardness ∼1 GPa.

Which is within the same order of magnitude observed with the tooth of a limpet.

The authors mention that the scutes used in the experiment have a thickness ranging from 2.8 to 4 millimeters (~0.11 inches - 0.15 inches). Now, one thing that is a trope related to dragons is that they are obscenely large. Assuming that dragon scales are made of the same material as turtle shell scutes, and that thickness has a linear* relationship to body length... A dragon the size of a Tyrannosaurus Rex (~12 meters) would have their thickest scales (I suppose around the middle of the back) being around 24 centimeters thick. That is almost 10 inches. Ten expletive inches of turtle shell-hard material separating the atmosphere from their subcutaneous fat. Imagine trying to put an arrow through that.

But let's not stop there.

Smaug was at least 20 meters long, so his thickest scales would be 40 centimeters thick (~1.31 feet).

I remember something about chromatic dragons from D&D reaching 30 meters long sizes. Their thickest scales would be 60 centimeters thick (~2 feet).

And don't get me started on the really big beasts such as D&D's Tiamat, Magic: the Gathering's Nicol Bolas and Shadowrun's Mountainshadow, which all would have their thickest scales being measured in multiple meters.

* square would be more reallistic, but the beast would be too thick to be believable.

If you think that those scales would be too thick, making for a ridiculous creature that is more scales than anything else in mass in volume, you can taylor the scales down so that each is the approximate size of a red eared slider (as has been suggested in the comments). They would still provide an amazing level of protection. See Valthek's answer - the disposition of the scales may play a more important role than their actual thickness.

In addition to what others have said, the individual scale is likely not the most important part of what makes a dragon's hide so impossibly tough. It's the totality of the hide that makes them nearly invincible.
Individual scales are tough, sure, but they function mostly as a sort of shock absorber, much like how ceramic plates work in ballistic vests for our modern military. These incredibly tough scales overlap both to distribute the energy of an impact across multiple scales and to present as much material as possible for an attack to pass through.

This provides the dragon with two main benefits:
One: a single scale will rarely take the whole force of an impact, meaning that an attacker needs to break through several layers of scale in order to get to the vulnerable tissue below. Two: Due to the fact that the scales are layered over eachother, an attack from straight on will actually hit a scale at an angle. This means that the dragon has a natural form of sloped armor, the kind of armor we used to see on tanks. In short, because it's angled, the scale presents more material that needs to be penetrated while remaining fairly thin.

Should an attack have sufficient power to actually break dragon scales, they will shatter and fracture, absorbing much of the punishment that would otherwise harm the dragon. And their fairly rapid metabolism means that broken scales will grow back over a matter of weeks.

The layer beneath the scales is much more maleable, a sort of cushion that distributes blunt impacts across a larger area, reducing the potential impact, further enhancing the energy-dissipating effect of the outer layer of scales.

It depends entirely on your dragons, unfortunately. There are several ways of creating desirable traits within creatures.

Firstly, there is the absorbtion from environment idea. I can't quite place the source but I believe there are some creatures that do not create their own poisons but absorb them from their environment. It's not harmful to them, but obviously makes them somewhat unpaletable. This can then extend to dragons - maybe they eat unobtanium which they then pass to their scales rather than using for energy.

Secondly, there's the evolutionary/creationary trope - they have evolved through environmental pressure / were given by a benevolent creator god/goddess/pasta-being the extra hard scales made of materials like the limpet teeth from Dan Clarke's excellent answer.

Finally, the other alternative is they get their armour ready made from somewhere else. Maybe they have segmented armour rather than traditional scales, and they get this armour from something else (some other megafauna, rocks, plants etc). Perhaps they have rudimentary crafting abilities and melt their enemies armour into useful shapes? Perhaps they have a slave/manufacturing/master class who create their armour for them to use? This is up to you, but hopefully gives you a starting point.

If dragon scales are tough enough to deflect hand-held objects,then they would be tough because of what it would have to eat. dragons in tales hoard gold and metals along with precious jewels and such. A dragon could consume these metals, and its own natural material of keratin to provide its extremely hard and durable scales. The thesis basically is that dragons are what they eat.

The weight of course could become an issue, which also could be why there is still so much gold in a dragons hoard, so the shape of the scales are important. I have no clue what shape realistically the scales shape would be, but different shapes could provide different advantages. If it was winged it could be a sleeker scale, with a more subtle triangle shape.

I also think that evolution would also be key in this. Having super hard scales are advantageous, especially for fire proofing but if they fly why would they need the extra armor? The answer could be the second best predator on Earth one that can adapt to nearly any situation. Humans.

If humans started hunting down dragons, then dragons are forced to adapt. Since dragons are like any other creature (even though they arent real), they evolve like any other. So if they evolved at the time of humans then it would have scales tough enough for rock slinging, then it would get tougher for stronger and stronger projectiles. This would also apply to the advancement of melee weaponry.

The the three key elements could be both the consumption of metals and gems, shape, and forced adaptions to humans.

Carbon is the fundamental building block of all organic materials. It is not beyond imagination to envisage some naturally evolved process that generates carbon fibres or carbon nanotubes, especially since processes to create them these days involve heat, and dragons generate plenty of that. Carbon nanotubes have huge tensile strength, but are not hard, so they would have to be mixed with some other material to create an armour. Perhaps something like enamel or keratin, but you could even throw diamond into the mix (another carbon construction created by heat and pressure). The only snag might be fireproofing it, which is probably a requirement for a dragon. Perhaps some metal could be added to the mix to conduct the heat away.

Not the answer you're looking for? Browse other questions tagged science-based biology dragons or ask your own question.

18
Tactical Advantages to Dragons with Riders
4
Anti-Dragon armor, shields and melee weapons
8
The right size for dragons
8
Can a horse-sized flying creature grab and carry a human's weight while flying?
12
How could dragon society avoid interacting with humanity?
11
Augmenting melanins with Prussian blue?