Could the romans have built a mechanical sewing machine? [closed]

Is it possible that they could somehow have figured out how to build one with the technology they had?

If so, what other types of similar machines could they also build?

Yes, they could. From the writings by Hero of Alexandria, it is clear the Classical Age was full of machines and automatons if you had enough money to pay for the construction and maintenance.

A Roman engineer could have created a sewing machine connected to a waterwheel. They had water powered factories, like the one in Barbegal 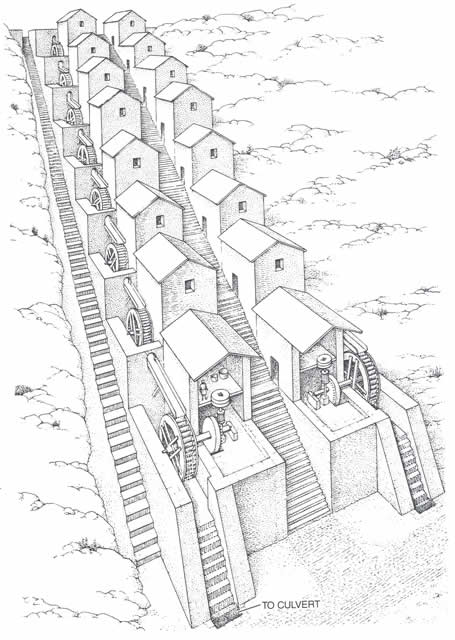 They never did it because they didn't have the need of:

Without a necessity not covered by the population or even slaves, new inventions aren't carried away.

For everyone talking about metal manufacturing--you can stop now. Because there have been all wood sewing machines in the past, with just a few select metal parts (like the needle, and yes, even that can be wood!)

Wood and shell needles can actually be used in machines like this. Further, they don't have to be absolutely straight. They shouldn't be crooked, but a craftsman could surely fashion one straight enough. Iron and bronze might corrode and stain the clothes, but keep in mind that machine maintenance in early models was a big deal, and you can bet that needles would be replaced and re-sharpened far more regularly than they would have time to corrode.

Needles will have to be replaced because they will break on the regular. But that's fine because the speed is good enough that the time lost in that would be worthwhile, probably.

You don't need something as fancy as a water wheel--early machines used people power. They were mechanical, but one person would work the crank and one would feed through. There are a ridiculous amount of types and kinds of sewing machines.

Now, you haven't said money was any object, otherwise I would say that just keeping your machine in needles (because they will have to specially crafted and will need replacing A LOT) might not make a sewing machine cost effective at all.

You indicated you wanted to do leather and canvas in one of your comments. These materials are harder to work with than standard fabrics (even though the first machines were built with this in mind, it's actually more of an engineering feat because of the thickness and toughness of the fabrics in question).

The question then becomes: what's cheaper, manpower or maintaining a machine that needs constant maintenance and specialized expensive parts. Of course your super villain or whatever might not care about that...

In the course of human history, we've had the ability to do things sometimes for entire millenia before we bothered to make it widespread. Like the Chinese invented loads of stuff, then went, "eh, this was a cool experiment but eh." while the technology and parts can technically exist to make a thing, that doesn't mean that it's been worthwhile enough to pursue. Whatever the patent records say, I will bet you that a sewing machine has been invented way before that maybe even by the Greeks--but that the reaction was probably "Oh that's neat. Cool toy." and then it gathered dust somewhere before being sold off as scrap or burned. The first ones we actually know about came into being because people wanted a quicker and cheaper way to meet demand. People do what's practically profitable.

From the design illustration filed with the patent it seems like Saint's machine could have been invented earlier. Most parts (such as gears, cogwheels and cranks were known by the roman empire by at least early third century BC) the question would be whether current time metalworking would allow sufficient miniaturization of these components (The Antikythera device suggests that it would at least around 2nd century BC).

So, in theory... yes, I think they could have. But as Alberto Yagos said before me. The need never arose. Mainly because almost any manual labor can be solved by tossing more slaves unto it. Is one slave to slow to sew tunics for your army? Try two slaves, or ten, or one hundred... we'll have a sweatshopatorium set up right by the pottery workshop, the cattle yard and the tanners.

If you manage to invent a reason for them to need the machine though, I think they could have invented it.

No, they wouldn't: Their needles were not strong, straight, cheap enough for using them in a machine, because their iron wasn't strong and cheap enough for that. Romans used iron needles, but kept using ivory and bronze ones as iron would corrode and might stain the clothes.

Also, iron wire-drawing wasn't developed until the tenth century, and prior the needles had to be forged.

Steel needle-making requires a knowledge of heat treatment through annealing, hardening, and tempering.

Source: Findings: The Material Culture of Needlework And Sewing, found with Google.

Maybe yes, but without machine-made sewing thread that invention would be mostly useless.

Sewing machines are capable of greatly increasing the sewing speed, but they require high quality, uniform sewing thread that wasn't available until the Industrial Revolution. Using preindustrial thread would result in a much slower process, with the thread snapping or jamming all the time.

It's like you can build a race car, but what would you do with it if there are no roads?