How would the maternity cycle of a Fairy work?

Writing about Fairies, the one thing I can't pin down is there reproductive cycle. My Fairies will be actual little mammals. Not just elementals who are born out of nature. I want them to have similar developmental stages as a human baby would, but I'm wondering how their physical size would affect this. Would it take a shorter time for a foetus to come to term in a smaller body? Or would it still take a long time to develop the complex brain structure that we have?

Model your fairies after little bats. 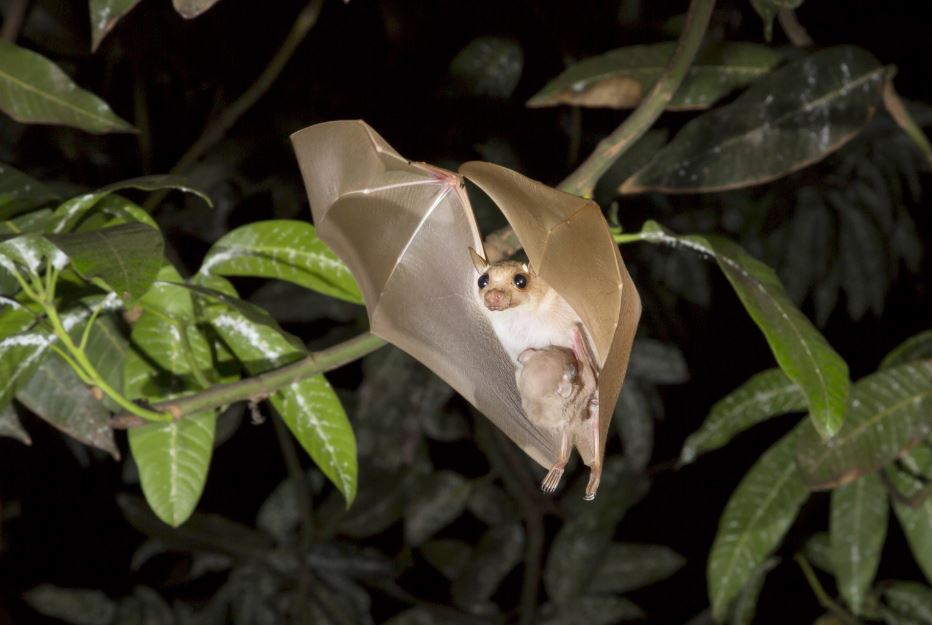 These little bats are 20grams and about 5 cm, like your fairies. If the mothers can carry baby bats so can your fairies.

Micropteropus pusillus is bimodally polyestrous. It has two birth periods per year, from March to May and from September to November. These periods are adjusted so that lactation coincides with the rainy season and availability of fruit. Each parturition period is followed by a post-partum estrus and then by immediate embryonic development.
Breeding occurs throughout much of the year but mostly in March, April, May, and November. The gestation period is five or six months. Weaning takes from 7 to 13 weeks. (Jones, 1972; Nowak, 1999; Thomas and Marshall, 1984)

Larger bodies take longer so your fairies will be done growing faster because they are small. I suspect sociality is what really takes a long time (for elephants, humans, dolphins) and so you can make your fairy childhood arbitrarily long for that aspect - but probably the juvenile fairies are not being carried by their mothers the whole time.

All right, we can handwave headsize and time for developing the complex brain, as these fairies are too small to have our exact style of brain. At that size unless they have a hive mind there is no realistic way they're intelligent. So a wizard/evolution did it somehow.

The closest animal to their size I could find is the Etruscan Shrew, which is between 3 and 5.2cm.

There reproduction goes as such.

The gestation period is 27–28 days, and they have 2–6 cubs per litter.[2][9] Cubs are born naked and blind, weighing only 0.2 g (0.0071 oz). After their eyes open at 14 to 16 days old, they mature quickly. The mother usually moves the young when they are 9 to 10 days old and if disturbed leads them by caravanning them to a new location. The young Etruscan shrews are weaned at 20 days old. By three to four weeks of age, the young are independent and are soon sexually mature

To give the fetus more chance to grow, have only one or two babies at a time, and keeping it at about 30 days would work best. We are already handwaving brains, so long term gestation isn't necessary. This would also explain why fairies never seem pregnant, it's over so quick it's not noticed.

Instead of a mating season like most animals, they are fertile year round, which is necessary to keep their numbers up. Being so small, they are at the bottom of the food chain. Relatively quick pregnancies, followed by three or four months of raising the baby to advanced toddler hood followed by another pregnancy would be seen as a good thing. If it takes two years before the baby fairy is a toddler and the mother gets pregnant again, the fairy race will go extinct.

Considering the incredible metabolism of these fairies they'll lose the baby weight in a matter of days. Shrews can starve to death if they don't eat nearly their body weight in food each day. This is another reason fairies never seem pregnant and are never fat.

So rapid pregnancy, fast growth of the babies, followed by pregnancy again. They'll need a high protein and carbs diet, and we are looking at two or three pregnancies a year. Sexual maturity in females would be pretty quick, starting at most a few years old.

Not the answer you're looking for? Browse other questions tagged biology .

11
Could a Neptune like Gas Giant support life?
10
Could human beings evolve to have longer gestation periods? If so, how could this be done?
7
A cure, a vaccine, and one tricky disease
6
What is the science of fairy flight?
6
Closest real neurological disorder to the state of being an eldritch entity?
2
The chemistry of a long living (alien) animal
4
How would asexual reproduction (via mitosis) affect human cultural development?