Is there a habitability zone between the primary and secondary stars of a binary star system?

Yes, there is a habitable zone.

I have to disagree with StephenG's answer; we have data that indicates that this is possible for similar, Sun-like stars. I talked about this in an answer I wrote a few months ago; searching this exoplanet catalog, I found several systems that might be of interest:

The HD 20781/HD 20782 system has me quite excited. Both are G-type stars, and each star has at least one planet within 2 AU of it. The planets are all more massive than Earth, but that's immaterial; the important thing is that the binary stars have a separation of 9080 AU! That's enormous, and it's absolutely enough for there to be relatively little effect on each planet from the other star in the system.

Some things to note:

I did some modeling (Python 3 code on Github) to give some numerical support to this answer, so I wrote a program that generates habitable zones around binary systems, with certain assumptions:

I defined the habitable zone as the region where water is liquid on the surface of a planet. In other words, the planet's effective temperature - not taking into account greenhouse effects - must be between 273.15 K and 373.13 K. The formula for the effective temperature of a planet in a binary system is $$T=\left(\frac{1-a}{4\sigma}(F_1+F_2)\right)^{1/4}$$ where $a$ is the albedo of the planet and $F_1$ and $F_2$ are the fluxes from the stars. 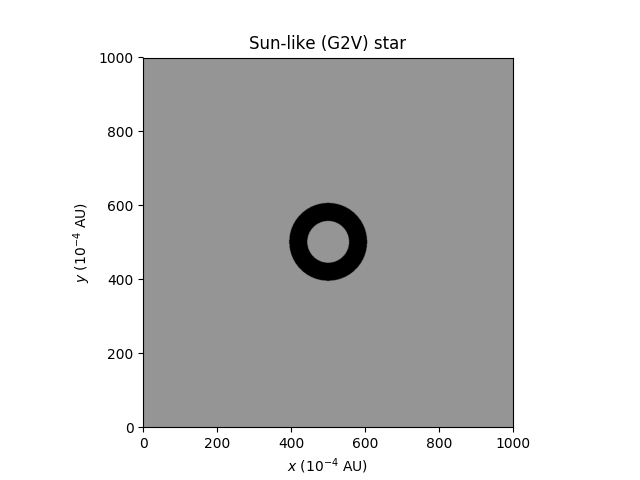 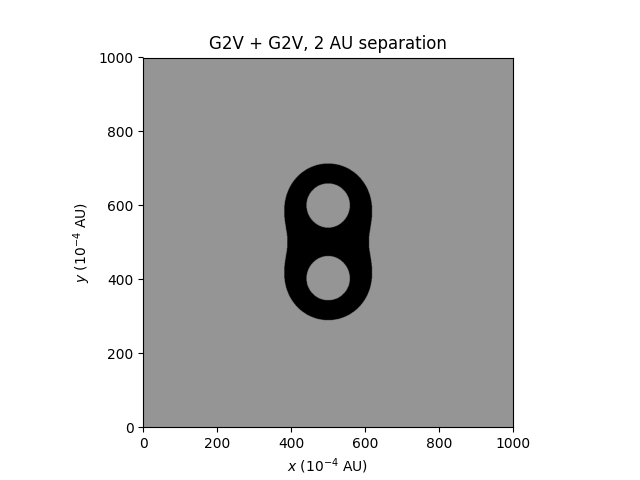 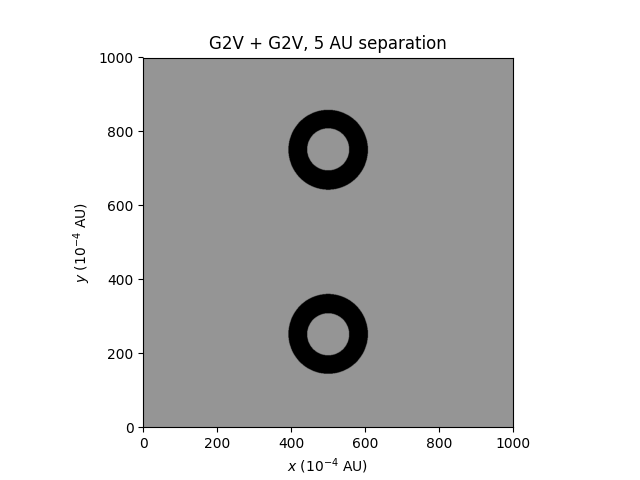 The effects from the second star are apparent with the 2 AU separation, but not with the 5 AU separation (although I can confirm that they're there). The form of the effective temperature formula means temperature only varies as $T\propto F^{1/4}$, where $F$ is flux, and thanks to the inverse-square law, even a separation of 5 AU produces minor results. 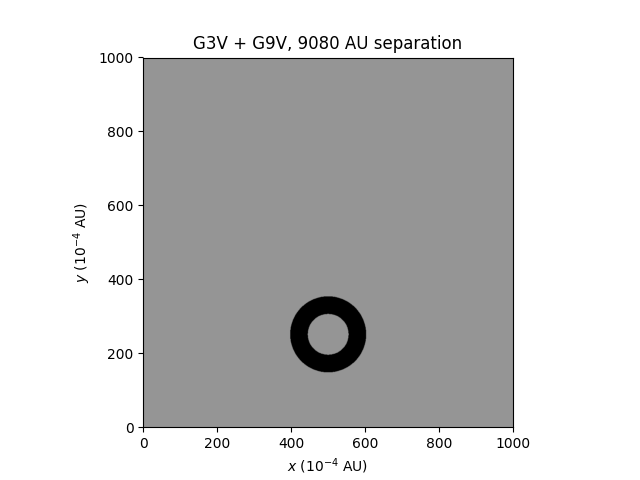 The other star is far off my screen. Zooming out makes it impossible to see. For the purposes of habitability calculations, each star is on its own.

Now, a class of binaries I'm curious about are late-type dwarfs with relatively small separations (1-2 AU). Two M-type red dwarfs can orbit close together and still have their own individual habitable zones: 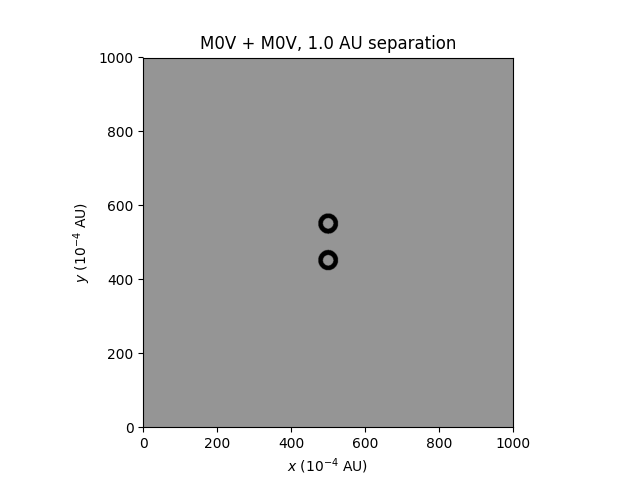 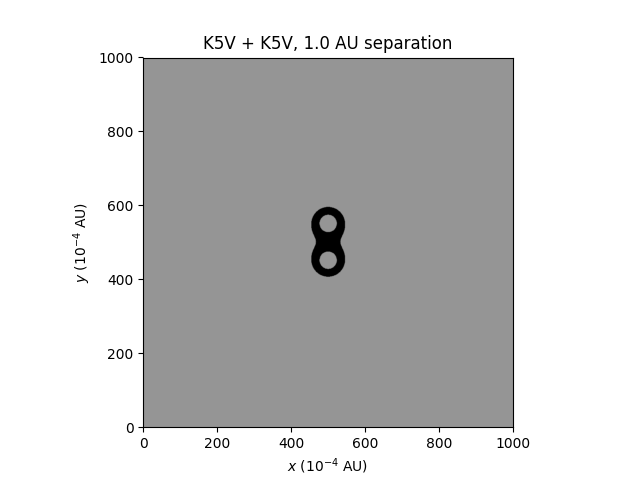 Yes, and right next door

Weigert and Holman, 1997 concludes that

This is confirmed more recently and with more powerful software in Quarles and Lissauer, 2016:

Our simulations show that circumstellar planets (test particles), within the habitable zone of either α Cen A or α Cen B, remain in circumstellar orbit even with moderately high values of initial eccentricity or mutual inclination relative to the binary orbital plane

Reading through their paper, they simulated stability for > 1 billion years for particles in the habitable zones of both $\alpha$ Cen A and $\alpha$ Cen B (and also circumbinary orbits that would not be habitable).

So, as far as we know, there exists a habitable zone between the primary and secondary of the nearest (non-red dwarf) star to us. $\alpha$ Cen A is very similar to our sun (1.1 solar masses, 1.5 solar luminosities, spectral type G2V just like Sol). The luminosity of $\alpha$ Cen B is 0.5 times that of Sol, so the companion can be pretty bright in these circumstancs.

How close can they be?

To answer HDE's addendum/bounty, I fired up my trusty Rebound tool to find the closest orbits that suggest stability. I did a bunch of grid searches over various eccentricities, and the finding was that for the stellar masses below, eccentricity has relatively little effect (at least for low eccentricities < 0.1).

The computational demands of this problem proved to be much higher than in previous questions. I tried to test 10s of thousands of cases over 1 million years, integrating with a time step of 0.001 years (about 8 hours). I found some interesting cases and some generalizations about behavior, but take these answers with a grain of salt. 1 million years isn't enough to prove anything.

Here we have some very interesting behaviour. Some planets will break out their orbit and orbit the barycenter of the system. Starting with the companion 3.5 AU from the primary, planet 1 AU from primary, and all orbits with 0 eccentricity, the planet did a horseshoe orbit at ~0.87 AU from either star for a million years. It was actually very close to the setup in this question.

For the case of the companion star being n AU away from the primary, the effects on the planet are:

The real finding here is that for suns of equal size, a planet is likely to end up near the barycenter of the two suns. The planet also very quickly achieves stability in the equal-mass sun setup, whereas in the following examples, the orbits are chaotic for more than a million years. I would suggest that in order to get the planet in an orbit in the habitable zone of the one of the suns, you would need to add other planets to the mix.

In this case, there are a good variety of stable orbits once the companion is at least 5.5 AU away from the primary. I didn't find any orbits that were stable in the habitable zone, though. Stable orbits for the planet tended to start about 2.5 AU away from the main, in some sort of resonance with the companion. Unfortunately, my 1 year old powered off my computer before I could read the final results of the 8 hour grid search for stable outer orbits. That is what you get for writing to the console and not a file. Whose idea was it to make power buttons have LEDs anyways? Those things are toddler magnets.

For the case of the companion star being n AU away from the primary, the effects on the planet are:

As with the last simulation, planets tend to be pulled towards the barycenter. This suggests that additional planets maybe necessary to straighten out eccentricities. However, it is also worth noticing that this simulation is close to the ones cited above related to Alpha Centauri, and it does not replicate the results. So, perhaps an extra big grain of salt needs to be taken with this entire endeavor.

Beyond 2 AU from the primary star, the companion star is too small to immediately eject the planet from the system. However, almost all of the orbits I plotted remained unstable for 1 million years, implying that they will eventually lead to ejection (or collision with the primary star! which did happen in one case). The two important relationships appeared to be the distance of the barycenter of of the system from the main star, and orbital resonances between the companion star and the planet.

In general there were the following zones of interest based on distance between the primary and companion:

I did not find a single orbit of the tens of thousands tried that ended up stable in the habitable zone within 1 million years. However, the 5-9 AU and 12 + AU cases both contained eccentric orbits with roughly the correct semi-major axis, so it would be possible for these to stabilize out given enough time.

Not for two large, similarly sized stars, maybe for one large star and one dwarf star (like a brown dwarf).

The former case would not allow a stable orbit to form for long enough for the planet to develop a reasonably consistent climate (essentially driven by a nearly constant level of solar energy) over a period large enough to develop life.

The case with the brown dwarf (a very dim type of star) can be though of as a system with a very large Jupiter that's still much smaller than the Sun, and with a much, much lower energy output. Such a brown dwarf could, in principle, be far enough from the planet to not greatly affect it.

There is a quantity known as the effective temperature which let's us estimate the approximate temperature effect of a star on a planet. We can use this to relate the effect of the smaller star (the secondary) on the temperature of the planet (dominated by the primary, for stability).

where the $L$ values are luminosity of the stars and the $D$ values are distance from the planet.

We want this to be a small number, like a percent or two at most for a reasonably stable climate.

So some very rough order of magnitude calculations :

So the secondary has to be about 80 times further from the primary than the planet is. Both would be in roughly circular orbits at these ranges, and the brown dwarf could be of the order of about 50 Jupiter masses.

These are, of course, ballpark figures.

First, to help clarify the orbit in the question posted, according to arXiv:0705.3444 that planets orbiting a single star within a binary system, is called an ‘S-type’ orbit (while a circumbinary orbit is of ‘P-type). This paper S-Type and P-Type Habitability in Stellar Binary Systems: A Comprehensive Approach explores various scenarios and their effect and limitation on possible habitable zones for said S-Type planets, though in heavily math-based, less conceptual-based terms.

However, as regarding to the orbital stability of an S-Type planet, Solstation.org on this page, referred other papers when indicating that planets with orbits that are less than 1/5 the closest approach of the secondary star are generally stable. It also mentioned that there were existing observed binaries in which dust rings and possibly planets appeared circling only one star, though far fewer exist in binaries with intermediate separations between 3-50 AU (below 3 AU there were some circumstellar P-Type rings) and it's above 50 AU that the S-type rings around a single star were observed).

So, the limitation on habitability is primarily restricted by the requirement of a steady insolation falling on it, not the stability of its orbit. Also, if you use StephenG’s equation as a ball park estimation, the closest the secondary star can be to the primary for various luminosities can be determined (with equal ball park accuracy) by maintaining the value in parenthesis. Therefore, as your change the luminosity of the secondary star L$_{sec}$ by a given percent, you have to change its distance (~80$D_{prim}$) by the square root of that percent (i.e. quadruple the luminosity of the secondary and it now has to be twice the original distance of about 80$D_{prim}$ to maintain the same relative insolation - up to some maximum limit below the primary’s luminosity, which I was not able to determine from the paper and not stated directly in it). Though it showed mathematically why equal stars could not support a habitable planet.

Not the answer you're looking for? Browse other questions tagged science-based orbital-mechanics solar-system habitability or ask your own question.

14
Orbiting one star in a binary system: what are the effects of the second star on the planet?
13
Can two stars orbit each other but each have their own planets in stable orbits?
6
Season cycle that would occur on a habitable planet that orbits two suns?

14
Orbiting one star in a binary system: what are the effects of the second star on the planet?
18
How can I safely brighten my secondary star?
43
How do seasons work in a binary system (planet orbits one star, not both)?
6
About how many planets are plausible for this binary-star system?
7
Is this circumbinary planet set up in a stable manner?
5
How would a colliding binary affect its planetary system?
2
Would the following hypothetical planets in the 61 Cygni binary star system have stable orbits?
11
What kind of Gas Giant has a “safe zone” between the radiation from a star and the radiation from a gas giant planet?