Would a giant Pogona (bearded dragon) be a good desert mount?

By saying giant, I mean something roughly around 2-3m long from nose to rear legs (not including tail) and 1m tall at the withers.

How would such a creature fare as a mount used by humans/humanoid to travel in the desert? (both Sahara-like and something like the Outback in Australia or the Grand Canyon)

Specifically, how would it probably compare to horses or camels regarding:

And a bonus (optional):

If the general answer is on the lines of "it would suck!", is there any simple change that can be done to its nature to make it more suitable?

(e.g. longer legs? inner water storage like that of camels? being an endotherm rather than an ectotherm?) 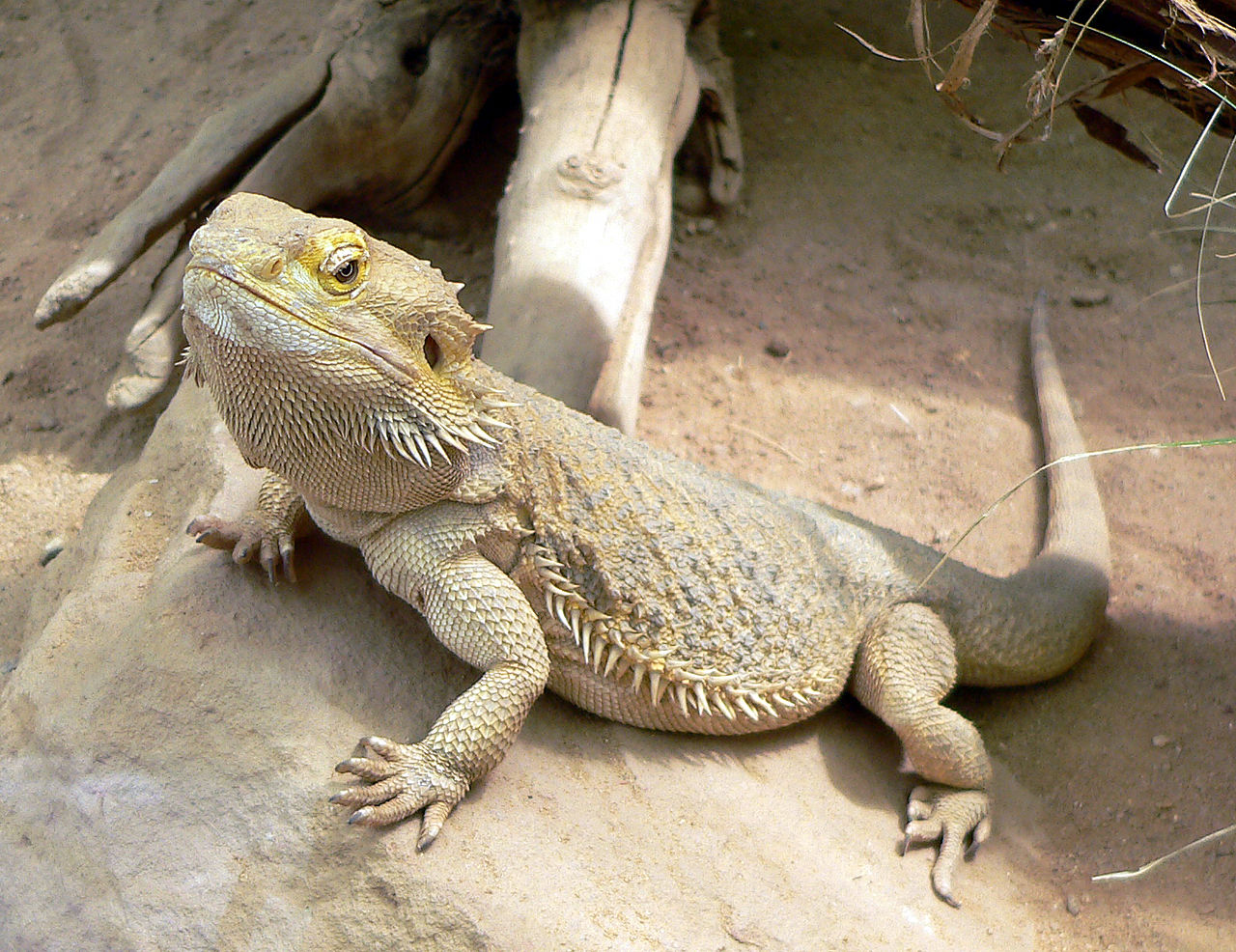 I thought this was because they were cold blooded but apparently it is an artifact of how they use their spines - excellent excerpt below.

It is true that many reptiles today lack aerobic endurance, that this is caused by their "cold-bloodedness" though, is blatantly false. The lack of aerobic endurance in most reptiles is due to their anatomy. In most reptiles, locomotion follows a sigmoid (S shaped) path. This movement was inherited from the undulations of their fish ancestors. Now while gills work fine with this movement, it doesn't translate very well into terrestrial locomotion. In most reptiles, respiration is controlled by the costal (rib) muscles. Unfortunately these muscles are also used in locomotion. Furthermore this sigmoid movement alternately compresses each lung, thus making it a real chore to breath and walk at the same time. For many reptiles this means holding their breath as they move and evolving a high anaerboic capacity. This is why lizards often take breaks inbetween walking; to catch their breath.

You want your mount to be able to go along at a steady pace and the lizard will struggle with that for any prolonged ride.

Additionally these bearded dragons are bellydraggers. If it is big enough to carry a human it will have a weighty belly and it will get bellyburn from all the dragging.

Pros (relative to a camel)

Cons (relative to a camel)

Can a bearded dragon work as a mount? Sure, so long as it is properly domesticated. Is it better than a camel? Probably not.

1 - Salmonella. Lizards carry Salmonella. The standard defence is to wash hands after handling...might not work if you're sitting on the beast for a long duration. Your mounts may cause disease in your riders.

2 - Brumation. Not sure if you're aware on this one...but Bearded Lizards do hibernate, usually into fall and winter as a reaction to changing light cycles. I'm sorry, you'll have to walk as your mount is hibernating for the next few months' is probably something nobody wants to hear let alone suffer through.

3 - Little more out there...but one of the leading causes of death in pet Bearded Dragons is from eating excessively large items. The result is the stomach contents put pressure on the creatures spine and ultimately paralyzes it. I'm not 100% if sure if putting any form of weight on the creatures back would allow it to digest properly (IE, there might be a biological reason why you can't actually sit on your mount here...maybe the duration of a combat scene?...but not for prolonged journeys). This is very much a product of its belly already being in contact with the ground...any weight on its back just squishes it's innards a bit.

It's already been answered, but if you're determined to have a reptilian mount, you would be better off looking at a varanid, agamid or massive snake as a mount than a bearded dragon relative.

Willk didn't name the exact reason why the S-shaped movements limit breathing, it's called Carrier's Constraint. Varanids (goannas, perenties) use gular pumping to help force air into their lungs as they move. Gular pumping expands and constricts the throat to force air into the lungs as the monitor moves so they can maintain a relatively active lifestyle. (A paper to look up would be 'Contribution of Gular Pumping to Lung Ventillation in Monitor Lizards'. There's a free pdf of it available on google scholar)

Also, if you want to be really different, consider looking at the family tree of the Crocodylomorpha, there were armadillow-like crocs (Armadillosuchus) and crocs that could gallop on land (Pristichampus) to scratch at the surface.

In comparison to camels and horses, your best option is a camel really. They are completely adapted for desert living, are capable of high rates of activity regardless of the temperature swinging between hot and cold and due to their herbivorous diets would be easier to feed than a reptile (where a camel can immediately eat any available vegetation, your reptile would need to be fed on animals that are eating vegetation, in a desert life is relatively scarce so needing to feed a massive mount on primary consumers would be difficult to do in a way that would maintain more than a few such mounts at a time). And a camel beats a horse because their feet are better adapted for traveling on sand or rocky ground (no hooves to pick up stones, split, crack or sink into soft sand), their humps and thick fur are combination food stores, metabolic water store and insulation against the sun's heat, which horses lack. Horses also have higher water requirements than camels.

I just wanted to throw it out there that we imagined flying lizards that spit fire and also people mounted on them, mounting a giant bearded dragon (that doesn't actually exist, obviously) wouldn't be that far fetched.

bearded dragons are mad spiky though so it would probably be really uncomfortable.

Not the answer you're looking for? Browse other questions tagged reality-check creature-design mounts or ask your own question.

7
How would a giant marine snake-like creature survive?
3
How big would a giant pig need to be in order to carry a 10-foot tall humanoid on its back?
4
If you could train them, would bulls make good cavalry?
6
How would a giant reptile creature hunt in a desert?
1
Would it be possible to use a mount that requires a much higher temperature than the rider?
26
How useful would a giant centipede-like creature be as a mount?
29
Would it be possible to mount a working minigun onto the saddle of a tyrannosaurid dinosaur?
11
Would a dragon sized saddle or any of its parts be buoyant enough to keep an unconscious human breathing in a calm ocean?