I have a science fiction setting that I would like to spice up with hand held sci-fi weaponry (coil guns, plasma weaponry). However, it may be too difficult to compare plasma vs coil as there are too many unknowns. One way to resolve this is to compare speculative technology against a known technology.

Given what we know today what innovations are necessary to make coil guns competitive against gunpowder based weaponry (chemical expansion technology resulting in AK-47s, AR15s, etc.)? What properties would make coil guns superior to current hand held weapons?

Context: The environment is current warfare conditions. Assume a battlefield similar the Second Gulf War. Specifically, the United States may choose to use coil guns and Iraq has the same equipment as in the historical record.

Example Answer: Coil guns have similar failings as other magnetic accelerators. At the hand held scale, you end up with small projectiles moving very quickly and thus a small wound track and therefore narrow would tracks. The solution may be to fire a second projectile at a slightly different angle. Thus a set a delay of a few micro seconds between shots as the shooter will change positions.*

Note that these parameters are intended to guide not interfere with responses. You have license to adjust parameters to prove a point (for example change the Second Gulf war to the Vietnam War).

* This is not intended as an answer, but as a model of the types of logic and facts I would like. Feel free to add formulas such as KE = 1/2MVˆ2

The major problem with a directed-energy weapon (which describes coil guns almost as well as laser weapons) is the energy part. The beauty of chemical propellants is that you've got all the energy neatly tied up in the reactants.

The best batteries that are being lab-tested right now (not mass-produced) approximate 350 Wh/kg, so assuming you have a 12-round magazine, you'd need two kilograms of batteries per magazine. In comparison, a 30-round magazine for an AK-47 clocks in at 0.7 kilograms, energy, rounds, and storage included.

So as with many other electrical appliances, you either need a massive increase in efficiency (difficult due to the physics of the coilgun) or an equally massive increase in battery energy density to make it so that your futuristic soldier doesn't have to carry around a backpack stuffed with batteries to sustain fire for a bandolier's worth of rounds.

There are some other differences that give no clear advantage either way IMHO but might be significant in some specific case. For example modern ships might have enough power generation to power a coil gun effectively. In such case not needing to bundle propellant with ammunition would be a good thing in every way. But for other uses meeting the power requirements in some other way is as mentioned before more pain than the bundled propellant and cartridges.

Basically for coil guns to happen the benefits must be important while the disadvantages need to be managed somehow.

Mainly we are talking about muzzle velocity here. There needs to be some use for very high velocity projectiles.

It does help with armor penetration. So it could replace sub-calibre rounds in tank cannons. But modern cannon can already solve this issue by shooting any number of rounds designed to penetrate armor with explosive power (HEAT, SEFOP, HESH and so on). These seem a simpler solution and it is already available. It seems unlikely anyone would develop coil guns for this.

But you could assume HEAT and its alternatives were never invented for some reason. It seems very unlikely, though. And HESH works using a different principle so you'd need everyone to miss two fairly obvious developments.

It helps with range. But you can just use missiles. Or reduce the distance by attacking from an aircraft. And better the range of your gun is, more likely your ability to target or detect the target is too be the issue. It would be useful but probably not often enough to justify replacing existing weapon systems with coil guns.

If guided missiles were not available, having a tank cannon that can shoot farther might be worth the effort. Similarly an A10 with coil gun might be useful if it could not carry all those missiles and smart bombs.

It helps with accuracy. Less time the projectile needs, the less time wind has to mess with it or the target has to move. This might be useful for snipers or air defense systems. Snipers also benefit from not having a muzzle flash. But, of course snipers already have good guns and the US had no real air defense shortage in any recent war, so you'd need to go far back or assume WW3.

That seems pretty depressing for coil guns. I think we might need a drastic change to justify coil guns. If modern propellants were not available and people were stuck with gunpowder for propellants coil guns would look very valuable for accuracy. If they also had no good explosives, coil guns would give superior armor penetration. If guided missiles do not exist or your war happens before they do coil guns might be useful for long range weapons in vehicles.

If you can deal with the disadvantage...

So you do not need to just remove some technology to create a use case, you need to add a way to provide the power.

Simplest way would be to get better batteries and then use capacitors to develop the pulsed power. But it seems unlikely that anyone had batteries that good available in some past war. Especially if we also need to assume they do not have electronics for guided weapons... High temperature superconductors might enable it, I suppose. And make the coil gun much more efficient as well.

It might be better to use a generator that is inherently pulsed. The various explosive power generators seem the best bet. There are several types but the general idea is that you have an electric or magnetic field and use explosives to change it very rapidly. Piezoelectric materials can also create rapid pulses of power with explosions. So you could assume the development of efficient pulsed power generator at any point past hundred and fifty years or so. But this really just moves the explosion from your cartridge into a connected power generator.

In addition to crazy efficient (possibly physically impossible) compact and lightweight power storage you need some seriously heavy duty power management as well. If you try to conduct too much electricity through too narrow of a circuit its going to increase electrical resistance. This means heat. A LOT of heat. If you pulse a large enough amount of electricity through too narrow of a circuit (aka narrow enough to fit inside a handheld device) its just going to explode.

You need extremeley powerful room temperature superconductors, which also might be something that is impossible to exist. Metallic hydrogen might be one but we dont know how stable/unstable it is yet, its theorized that its pretty stable, but if components of a weapon were made out of it every soldier would be carrying an unpredictable bomb instead of a reliable weapon. Were talking about exposing something that can explosivley revert back to a gaseous state to a lot of heat and kinetic energy. 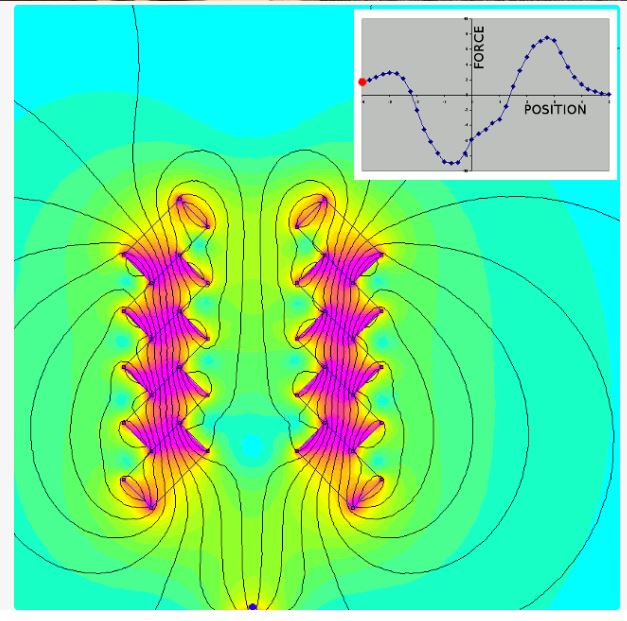 The idea: the magnet ammo is pushed through the area where the fixed magnets offer resistance. When the ammo reaches the sweet spot the magnets then accelerate it out the front.

This instructables shows a guy with a large one using a ring magnet. Pretty clearly he is inputting the force himself with the ramrod, which is then all discharged at once when the magnet clears the sweet spot. 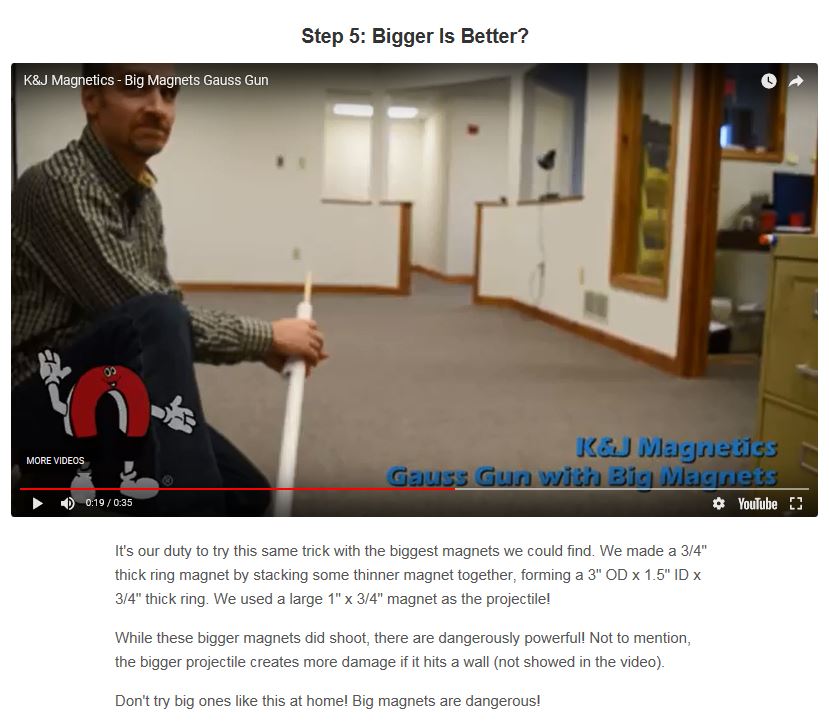 So scaling up more: the big future magnet gun would have strong magnets and something like a windlass you would crank, crossbow style, forcing your magnet ammo up into the sweet spot. Then, crossbow-style, your input energy would turn to kinetic energy and the magnet ammo would be launched energetically out the barrel! I think you could have a pin to hold your ammo in the sweet spot once you got it there.

What advantages does that have over a cross bow, you may ask. The following:

2: Did you see the part where it uses magnets to fire magnets?

Here's a slightly more radical (read as speculative) answer to the coil gun. What has been said in previous answers is essentially correct insofar as it relates to the energy requirements of a coil gun, but my solution solves the mass problem by eliminating the battery.

Nikola Tesla (IIRC) was the first person to experiment with Wireless Power Transfer technologies. These come in two primary variants; near field transfer (which allows you to charge your mobile battery through induction, for instance) and far field transfer (that uses microwave or laser beaming to transfer power).

So; what you really need on your rifle is a capacitor; a good one that can hold a charge for a single (preferably more) shot. You then have a ID check on the gun that can send a signal to a satellite, and trigger a recharge.

The advantage of this is that you have a massive power generator somewhere, which beams your soldiers their power via satellite. Ideally, this would be biometrically encoded, meaning that only a authorised weapon in the hands of an authorised soldier could receive the energy (solving for hostiles pinching the weapons). Biometric signals could be part of the 'recharge' signal and verified centrally so any friendly soldier could pick up any friendly rifle and get to work.

In such a case, the primary disadvantage is time between rounds. Even if it takes as little as 5 seconds to charge between rounds, that's still 5 seconds you're out of operation in a combat situation. One solution for that is to take 2 rifles into the field. The other is to have a 3 round capacitor, at least allowing for the 'double tap' kind of fire. Perhaps you do both?

These guns (given their better accuracy at range because of the muzzle velocity) would make great sniper rifles, especially because of the lack of muzzle flash. They would NOT be very good at all at crowd control. So they would have their place, but they would also change the tactics of your battlefield units to take advantage of the relative strengths of these ground weapons.

Ideally, they would also be used for things like Surface to Air combat. A larger version of this rifle could shoot the equivalent of an artillery shell with a very flat trajectory, meaning that you should be able to shoot down aircraft quite effectively. In such a case, the recharge time would be less of a problem.

Ironically, the flat trajectory would make them poor at conventional ground to ground artillery action, which is really good at peppering enemy lines over mountain ranges and the like.

So; with the right technology, coil guns are not so much poorer, just different. I would see them being incorporated into special units that have specific functions, like sniper teams and anti air batteries (no pun intended) where their natural strengths make them the ideal weapon.

Not the answer you're looking for? Browse other questions tagged science-based reality-check weapons railguns or ask your own question.