How realistic is the trope that wounds received in a virtual reality (VR) transfer to our own?

Examples: In the Matrix (movie) and Neuromancer (novel), cuts, scrapes, and bruises seemingly jump from immaterial to the material world.

Does this vary by VR type? Current VR technology doesn’t seem to transfer medical conditions, but does this change somehow?
Is this purely a mind–over–matter phenomena where a body is “tricked” into wounding itself?
In what sense could VR influence biological processes?

The idea that you can believe a simulated cut is real hard enough for it to magically appear on your body a la Matrix is pure bunk. But..... You could end up with real psychological trauma from simulated events. The pain itself could be simulated realistically enough that say, a guy in a war scenario with zero saftey interlocks could step on a landmine and expierience a double amputation with shrapnel embedding itself in his abdominal cavity rendered in full spectrum sensory feedback (through some sort of hand wavey nueral interface) and develop some form of Post Traumatic reaction to the expierience.

Also in the Hyperion Cantos novels theres a scene where the protagonist walks through a house where the occupants are all emaciated and plugged in to a direct neural uplink VR set. They had elected to commit suicide by shutting the saftey features off so that the system would not automatically disconnect when sleep, food, water, or other necessities were needed. Its not too far fetched from current reality, cyber-gaming cafes in asia have had customers die in thier chairs from exhaustion after multi-day marathon gaming sessions.

Bruises and scrapes are Hollywood magic. But there can be lasting effects.

Basically, you have to define what the VR does to actually cause the virtual reality. Typically this is some neural stimulus (such as via the jack in the back of the head in The Matrix). Thus, VR is limited to what those stimuli are permitted to do. Since you cannot consciously or subconsciously open up a wound with your neurons, VR would not be able to do these things.

However, there are a lot of systems that are bound to neurons in meaningful ways. You could cause someone's muscles to tighten up so violently that they break their own teeth. This is what happens with tetanus, and with some nerve agents. The eventual cause of death in these cases is that the diaphragm fatigues, and can no longer draw air in. Or, your VR might be able to get access to the ganglia which manage the act of breathing itself. Still that part of the brain, and it will kill you.

There are many more systems which can't be directly affected via nerves, but which are affected by them. The heart is designed to beat without any input from the brain at all (thank goodness!). However, it does receive input from the brain in both electrical and chemical messages, indicating to the heart what sort of output is required. The wrong set of chemicals and electrical stimulus could send the heart into a fatal arrhythmia, or drive blood pressure so high that you stroke out.

So in all, we should really be careful as to what electrodes we screw into our body. Our body is a complicated machine, and it wasn't designed to have electrodes screwed into it. But there are limits to what VR can do.

Other people have already made some excellent points. I would like to add that psychological and physiological trauma are not as separate as many people think. So whilst a stab wound in VR may not physically result in a stab wound in real life, there is certainly a danger that the body may respond to injuries as if they were real. For example, if you cut your hand, your immune system will kick in, with an increase of white blood cells to target the infection. If there was no physical wound, but the in-game trauma was believable, one might hypothesise about a situation where the immune system might start attacking healthy tissue, or there may be swelling due to increased blood flow to the region. Even if not, psychological trauma is known to cause unmapped physical symptoms over time, including dissociation, muscle tremors and memory issues. In this sense, PTSD is a physiological disorder, and in-game traumas may cause similar blurring of boundaries which may -- for example, in the case of a convincing simulated head injury -- be complex and potentially severe.

Currently we don't have Matrix-style brain connectors, so the best virtual reality we can have includes these kinds of haptic actuators: 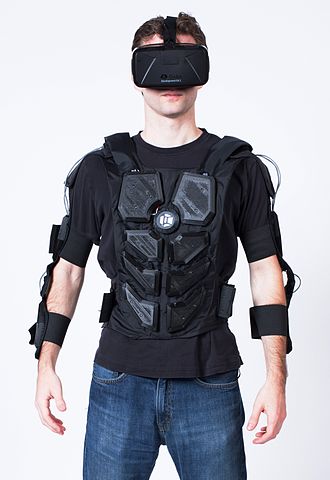 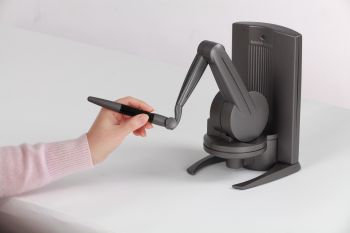 The software is programmed to give you feedback when you touch objects.

Like Cort Ammon says, it would depend on how your VR functions. The brain has mechanisms that prevent what's going on in your brain to affect your body in any way: that's what happens when you're dreaming. While dreaming, you can believe yourself running, falling, getting hurt, even dying. None of this affects your body in any way. So if you want your VR to be safe, that's doable. The only thing you'd have to consider is the effects of prolonged immobility on the body. (Not moving for over 2 hours would affect circulation and cause bedsores. That's why people roll over in their sleep.)

Can you make the VR transfer injuries to the body? Having access to the brain, you can transfer muscle contractions, which could cause damage to capillaries (causing bruising and pain), you can damage the muscle, you can even break bones. You can arrest breathing. (Though feinting would hopefully disconnect the VR, prompting starting breathing again?) You can send the heart into a fatal arrhythmia, but that would have to be very deliberate. I do not see how you can break skin, unless you cause a person to physically do it to himself (basically induced self-harm while sleepwalking). Again, however, all of this is harder to set up than a safe VR, so someone would have to deliberately want the kind of VR that can hurt you.

Assuming you have a VR that somehow can transfer REAL damage and pain to you (electric shocks would be my vote) I dont see why you would you want to play in it (outside of sex of course, which I'm sure will one day be a market; but I digress...).

A) what if you've been forced against your will in gladiator style VR arena?

B) what if its a contest for big prize money?

C) what if an evil programmer traps you in the VR?

D) what if they're high tech adrenaline junkies?

My point is, create an interface with the player that transfers pain/damage to them (electrodes, whatever...). Your audience will accept it.

WHY your characters are submitting (or not) themselves to said lethal damage is more important.

Not exactly a virtual reality answer, but by using some hand waving around "entanglement" you might be able to justify a person being in two places at the same time. Like I said, it's not virtual reality, because the other location is actual reality. But the end result is you get into some sort of machine, don't leave it, and act in another location where you can be hurt.

You can even leave something in where because the person spends half their time in either location that there is a 50% chance that ending the connection will take them home. They might have to get to a "synchronization" device in order to ensure they return to the correct location. It would also allow people to bring things back. ;)

To elaborate how this might work: (Keep in mind, this is all handwavium-technobabble)

A participant would walk into a "sender chamber" where they would have their quantum information sent to a "receiver chamber". This is similar to being teleported without destroying the original.

You might think that this is impossible because of the no cloning theorum, however, as I'll show later: we aren't cloning particles so much as we are splitting their quantum wave function between two locations.

Any movements made by the original are simultaneously made by the copy as well. The original can see what the copy sees and vice versa, they're basically the same person in two places. This information is transferred faster than light, because entanglement.

This is why the sender chamber has to be dark and silent, otherwise it would be confusing to see and hear things in two places. Imagine looking through a window while a projector is beaming an image onto it.

Momentum is a problem. Because if both copies share momentum then the copy will stop when the original hits the edges of the sender chamber. If momentum is not shared, then a knife going into the copy's skin won't move the original's skin out of the way.

Another problem is why participants can't just fly around by using a lift at the original side?

So far my only solution is more handwavium, unless a commenter has something better.

The entire time, the participant's quantum wave function is split between two locations and they spend half their time in the chamber and half at the remote location.

This means that if you cut the power to the sender chamber and let the waves "collapse" there is a 50% chance that the participant will still be in the chamber instead of at the remote location.

The only way to guarantee that the participant returns to the chamber when the connection closes is to have the copy enter a "synchronization" device which manipulates the certainty of the copy's position so that the wave function doesn't collapse there.

Now that I think of it, you can solve the momentum problem I mentioned by changing the positional certainty of the original. In this case, the original stops being in the sender chamber and only the ghost of their wave function remains. The participant comes back when the devices swap the certainty back. This also means that there is a 100% chance the participant will stay at the remote location when the connection closes unless that swap happens.

You can also use these synchronization devices to bring things back from the remote location by using even more handwavium.

That's it. A huge pile of BS with holes all over the place. But it's more realistic than the idea that a body will harm itself because it "believes it was hurt".

Take this BS and do with it what you will. ;P

Not the answer you're looking for? Browse other questions tagged reality-check biology brain virtual-reality or ask your own question.

2
Virtual Reality Arcades to end the world - societal impacts
1
How would intelligent AI in virtual reality discover machine code?
1
How to make fail-safe for full body virtual reality?
5
How can we limit or avoid addiction to virtual reality in a technologically advanced society?