How would the landscape appear under the influence of extreme windstorms?

I'm building a world with almost weekly extreme windstorms, driving the residents to either live underground or in the 'wind shadow' of sealed-off valleys. To sum up the windstorms' power, "You know that boulder that was next to your house? Yeah, it's out of the country now." I want to know what this would do to a landscape. What would it look like?

Several notable effects can be envisaged:

Most of the flat land will end up becoming wasteland or desert (the process of natural desertification), with the top soil being blown away and deposited elsewhere (likely ending up in the ocean). Over a long period of time, hills will be worn down, as will any mountains that are not formed from very hard rock, such as granite, and even granite might end up being reduced by the extreme weathering.

Due to the suspended particles of soil in the air, dust storms will be commonplace, and severe air pollution will prevent anyone from breathing normally without some form of filtration mask. Due to this pollution, sunlight will be reduced significantly. Visibility will be poor, and it will be easy to get lost in such conditions.

Due to wind erosion, dust storms, and lack of sunlight, very little surface vegetation will survive. Water sources (rivers, lakes, ponds) will become clogged and tainted. Animals will perish, herbivores being unable to find food and/or drinkable water, and carnivores for lack of prey and water.

Surviving plants and animals will typically be desert plantlife and creatures.

So how would this occur?

A water world will tend to produce superstorms due to the lack of large terrain features to stop such storms from developing to full capacity. On Earth, this can be seen is how the most destructive typhoons and hurricanes develop out in the ocean initially. A classic book that describes such a world is George R.R. Martin (yes, the guy who wrote 'Game of Thrones') and Lisa Tuttle's Windhaven.

Caused by a large asteroid or comet strike on the planet, this is a mass extinction level event, generating the same amount of explosive force as thousands of nuclear bombs. With tremendous amounts of dust thrown into the atmosphere, this would lead to massive destabilisation of weather systems and up to thousands of years of extreme weather, including superstorms.

While the superstorms wouldn't be continual with a single impact, you could have frequent collisions of smaller asteroids setting up a permanent change to the planet's weather systems, causing constant superstorms.

This occurs when a tipping point in the planet's climate is reached due to pollution or similar causes, creating an irreversible change to the weather. While planetary weather systems tend to be self-correcting, they can eventually be overcome.

The best example of this is The Day After Tomorrow (2004 film), with the linked article above exploring the possibility of it occuring in real life.

As Tenryu points out a water world suits and has many advantages. It doesn't have to be all water or only a few tiny islands; as long as there aren't major obstacles that form dominant currents and no major extended mountain ranges you're good. It can be several Australias, a bunch of Englands, Madagascars, etc, as long as they don't form extensive undersea ridges or land barriers. This way no major North-South ocean currents distributing temperature or wildly dipping jet streams doing the same in the atmosphere.
What you wind up with is a banded planet (think Jupiter) with most extreme winds near the equator, the occasional giant eye storms lasting however long you wish (cool to think of people/creatures moving with the eye of an enormous storm over centuries - safe inside but deadly trying to get in or out). In pockets between the bands and further toward poles the winds decrease but so does the temperature, drastically, in a direct linear manner. All the wind-bands don't need to go in the same direction either and can't if you want big eye storms that roll along at the boundaries between opposed direction bands.
- super cool to have different groups moving in different storm eyes, sometimes as storms roam they'd come across the ruins (very flat or entrenched) of another group or somewhere they'd been before. Of course they'd either have to haul their boats/barges or have quickly growing materials to plant and harvest for making new ones - while maybe knowing/recongizing where they were and how large the land mass/island was so how long the storm would be over it (weeks or centuries).
- all the while doomsayers saying the storm will end, the eye collapse and doom come hither.
- meanwhile those living on the habitable fringes have regular, unchanging weather (like living on the Pacific NW coast where it's mostly cold, cloudy, rainy and windy day after day after day and the sun becomes semi-legendary and you only notice the rain when it's going up your pant legs.

Landscapes such as you describe are called Aeolian landscapes 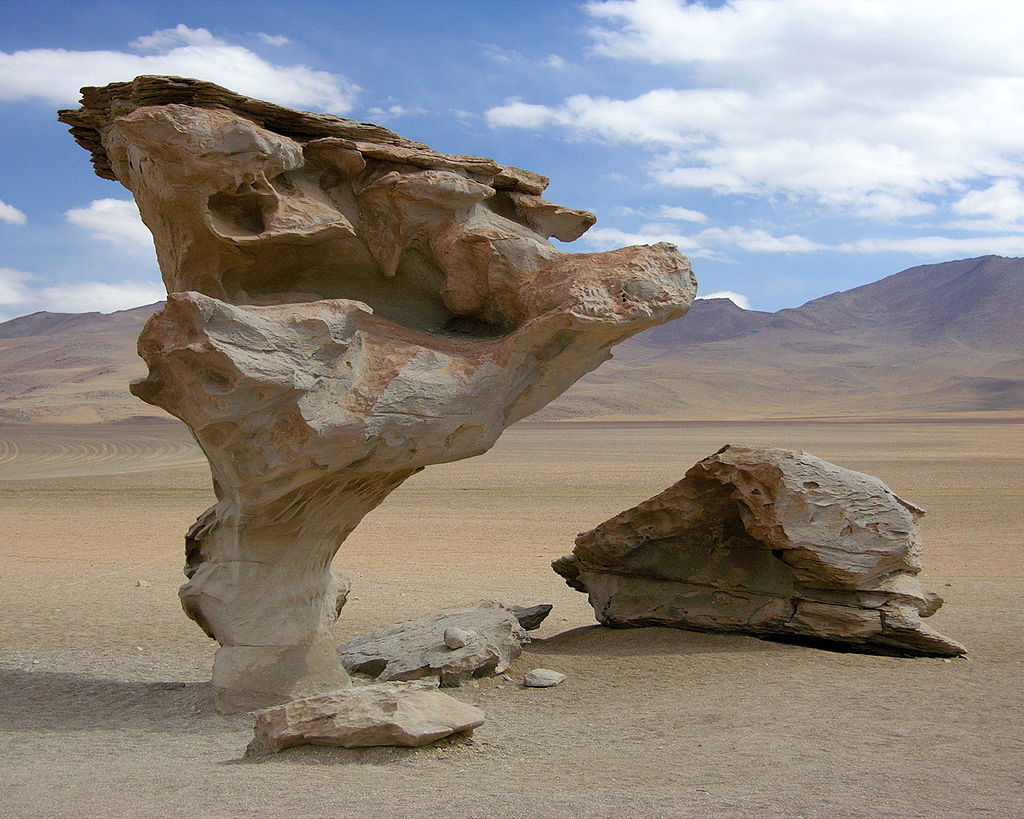 This rock reminded me of the one in your OP except the wind changed and so it got turned around. Blown rocks will leave paths. 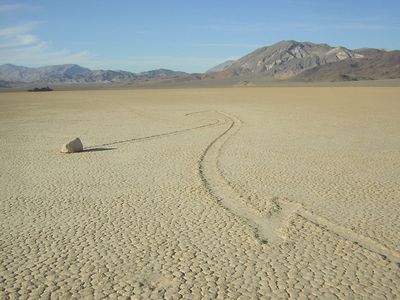 When the wind picks up the blown grit will abrade everything. There will be stones of the bedrock or old volcanism carved into unusual forms. When the wind subsides the blown materials will settle into dunes according to their mass - the most massive particles settling down first and the lightest last. These dunes will overly the landscape.

I can imagine conventional carbon-based life life under these circumstances in a few ways.

1: extremely abrasion resistant. Deep rooted plants with a shell or skin of the local materials could easily regenerate this shell or skin as new materials are blown into it during the storm. The energy of the blowing materials will be expended weathering this inorganic shell.

2: small and blowable These tiny plants blow with the wind - perhaps their aerodynamic properties allow them to quickly ascend to the top of the storm where there will be few massive impactors. Their own velocity will be that of the wind and carried particles and so they will not be abraded. I envision these as tiny lichen particles - when the wind starts they are the first off the ground and the last to land when the storm is over, so they always wind up on top. At the end of the storm there would be a fine green haze settling back into place.

3: Large and blowable. These herbivores are full of lift gas (metabolic hydrogen?) and ascend to height before any storm. Nothing else is that high and so they are blown along unperturbed. When the wind stops they settle down and get to eating.

5. Fast Like desert animals that complete their life cycle in the course of a week after the rain, these animals would complete a life cycle between storms. The next storm would blow away the dessicated husk of the adult and disperse the seeds - much like a tumbleweed!

This isn't so much an answer but more an example of what someone else has done.

The Stormlight archive by Brandon Sanderson features the world of Roshar. And Roshar notably has a gigantic storm (called a highstorm) that is constantly circling the globe, it never dies out. It is strong enough to throw boulders just like you said and is large enough to cover the entire latitude of the worlds sole continent (by the same name, Roshar) as it moves across. The highstorm hits regularly, about weekly. This has lead to massive change in Roshar's ecosystems compared to earth. It should also be noted that unlike real world storms, highstorms deposit a substance called Crem, which later hardens into stone.

Naturally because of the winds and the crem, Roshar has no loose sediments like dirt or sand. This means that all plants must have roots capable of digging into the rock. All life must also have adaptations to survive a highstorms passing. Plants have strong bark and are capable of pulling in leaves and branches for protection, e.g. grass pulling into holes in the ground. Almost all Rosharan fauna is crustacean to survive the storms with their hard shells, notable examples being the domesticated chull, a crab the size of a carriage and greatshells, crabs the size of islands (note that Roshar has a lighter gravity and denser atmosphere so yes they can survive their own size).

Rosharan life is also dependent on the highstorms, the mineral rich waters are vital for life. The sole exception to this ecosystem is the country of of Shinovar, which has large mountains protecting it from highstorms so they have a more Earth-like country.

Human society has also made adaptations for the highstorms. Buildings are only built in the shelter of natural formations (which there are plenty of thanks to crem) and then are still designed with the storms in mind, with slanted roofs and no windows the storm facing side.

I understand that this is quite an extreme and exotic example but it is one none the less, hope it helps

Maybe the planet rotates so fast that the Coriolis Effect is strong enough for hurricanes to form over freshwater and the hurricanes merge to make bigger and bigger hurricanes until they finally die out.

A storm powerful enough to blow big boulders out of the country would do so much damage that there would be a massive die-out of animals and plants. Even seeds would likely get blown away and the landscape might become a desert. This would make it hard for a civilization to get back to the point it was at unless the materials and technologies they use can deflect boulders and other much heavier objects as well as mimic sunlight and rain as much as possible.

Not the answer you're looking for? Browse other questions tagged physics climate geology weather extreme-terrain or ask your own question.

10
Underground Terrain Types / Biomes / Agriculture
6
What could cause the desert?
13
Weather and wind on a planet with a dense atmosphere
3
How could a portable handheld weather machine work?
4
How to block extreme winds on a stormy planet?
4
What will Glacier Bay National Park look like in 2000 years?