How would the appearance of Earth from orbit change when it would be rendered uninhabitable?

Through extreme pollution and large-scale warfare with atomic, biological and chemical weapons Earth has become completely unable to sustain life. The atmosphere is toxic, the water undrinkable and all higher plant- and animal life has died. How would this affect the way it looks from orbit? More specifically, how would this picture look after such a catastrophe: 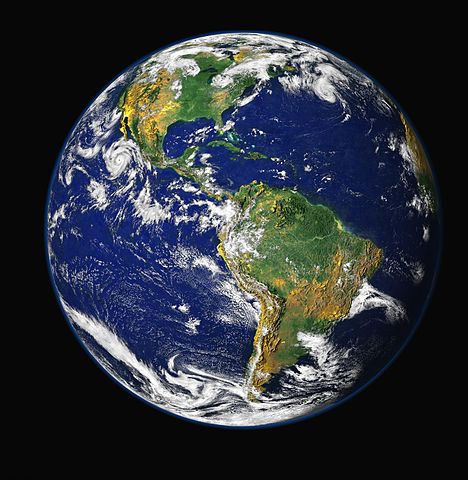 Background: I am currently toying with an idea for a video game which takes place in Earth orbit after Earth became unhabitable.

Take a look at the Sahara from Google Earth. That's about how things would look if all plant life was destroyed, just it would look like that everywhere.

While on that subject, depending on what made the water "undrinkable" will dictate how the water looks. If it's pollution (and a loooooooooot of it) then it could end up looking more like a lake than anything, or if it was more of a subtle thing then the oceans would look similar to how the do now, but I don't think you necessarily need to consider that since ocean water is basically undrinkable already.

All of this to say, I think you could color over most of the land masses as they are and have a successfully post-apocalyptic Earth.

Let's say (unrealistically) that this was caused by extreme amounts of dust kicked up into the atmosphere by the mother of all nuclear winters.

The pic is not fully accurate, in that to cover the landmass of earth with ice you'd have to first have the oceans retreat several hundreds of meters before freezing solid. It is possible that the earth DID freeze over nearly completely in the past, once in the Huronian glaciation during the Paleoproterozoic Era for about 300 Million years, and once in the aptly named Cryogenian period of the Neoproterozoic Era, on and off for about 100 million years. Since we're still here, both must've been a bit of hack job. So here it is this time, done properly.

Note that the high albedo will reflect heat, and so perpetuate the iceball status long into the future.

In your situation, you've only rendered Earth incapable of hosting life. The obvious impact is that all of the green you see in your photo would no longer be there. The vast majority of what you see in the photo, though, is geographical. A planet's geography is generally unaffected by the causes that you listed (war, pollution, etc). This means that you won't see any drastic changes. Continents will still be continents, and mountain ranges will still be mountain ranges. You will be able to see land contours that are normally obscured by plant growth, but I'm not sure any of these would be substantial enough to be seen from space. Given your doomsday constraints, there's only one thing that springs to mind as something that would be visible from that great of a distance.

The natural ocean currents flow in a roughly circular pattern, and it's common for things to get caught in the current and collect in a single place (e.g., the Great Pacific Garbage Patch). In a world plagued by pollution, enough debris could collect and coalesce into a loosely-packed artificial island that could be visible from space. It might not have a sharp outline like a natural island, but it would be enough to cause obvious discoloration.

In the short term there's going to be a lot of grey clouds around. All those nukes (provided at least some of them are ground-burst) are going to kick up a lot of dust. Perhaps there is going to be some deliberate seeding of the atmosphere as well for economic warfare purposes. That will settle down over the next few years or so.

Longer term its going to look much the same, save perhaps a few coastline changes (lots of groundburst nukes near the sea will let water into the craters) and the green on land will go away. The hue of the oceans would presumably change when all the photosynthetic life there dies off too.

That said, it seems unlikley that a human war using the weapons you describe could actually wipe out all life. Nukes are destructive, and ionizing radiation makes things more difficult for organisms, but it seems unlikley that anyone is nuking the sea bed. Biological weapons necessarily imply life and good luck finding any chemical agent that is A: lethally toxic to every organism B: can be produced in such quantities to kill every organism and C: distributing it everywhere life lives, for example deep sea thermal vents and deep underground. I guess you might be able to kill of all photosynthetic life, and that which depends on it, so for a good few million years Earth would look dead.

I would say almost the same except the green is gone and replaced with yellow/brown. After that feel free to add your own things.

Oceans - Higher ocean level & smaller ; the extreme pollution contributed to a runaway greenhouse effect, which through warming, melted your poles.

Colors - Brown where there is green. Rivers, etc. would remain the same, as trees - while they do contribute some, to local weather - do not have as large of an effect on major climate systems as land masses do.

Clouds - Due to the destabilization and heating of the atmosphere, many more large accumulations of clouds near the equator (including more extreme storms) will be noticeable.

Night - Well... it will be very dark during the night, instead of the twinkling of developed city lights.

Other than that, I can't imagine it looks much different. Replace the green areas below with brown, and add violent stormcloud accumulations (I don't have photoshop on my laptop, sorry): 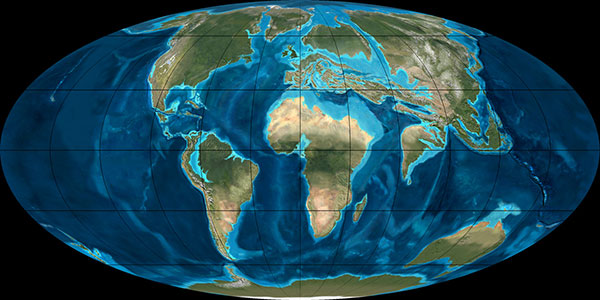 Not the answer you're looking for? Browse other questions tagged earth post-apocalypse or ask your own question.

7
How would the earth be different if the crust was at most 1km thick?
51
If an FTL spacecraft entered Earth orbit, how long would it take for humans to build a FTL spacecraft?
4
How Would We Reverse the Spin of the Earth?
1
How would the scholars read Modern English 800 years from now when they speak a different language?
34
Is there a hypothetical scenario that would make Earth uninhabitable for humans, but not for (the majority of) other animals?
3
Would the Earth appear to be spinning off center when viewed from geostationary orbit?