Developing a plausible monster in the Canadian wilderness [closed]

I need help designing the behaviour/hunting patters of a beastie that lives in the Canadian wilderness to terrorize our protagonists.

The area this creature would live in would consist of densely wooded coniferous forests. Creature would be an ambush predator.

The creature is relatively large/tall when compared to a human, has head-pulpifying strength, uses sound to hunt and is cunning enough to create and lure prey into traps. Has a monstrous worm like head (regardless of biological plausibility)

Based on the aforementioned information, what would this creature actually hunt like? How does it avoid having its monstrous bulk scare off prey items?

This white-furred bestial man-eating creature seems to perfectly fit your request. It lurks in the wintry wind, stealthy despite its large size, and is insatiably hungry. This supernatural beast is sourced from Algonquin legends, a native American tribe that lived around the Great Lakes.

Two easy sources for further information are Until Dawn (the 2015 computer game), which showcases a weaker, more humanoid version of the creature, and Descent: Journeys in the Dark (the 2016 board game), which has the toothed worm-like head you're looking for, as below: 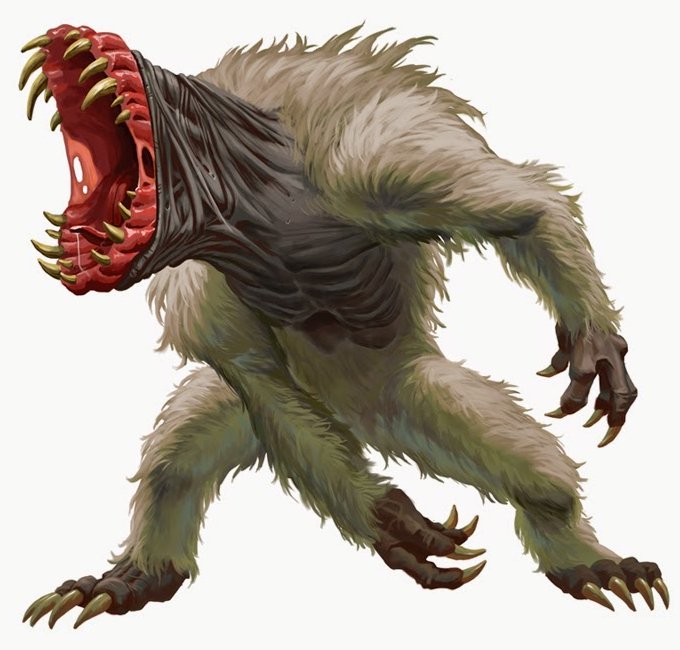 This large, hairy, bipedal ape-like being reportedly lives in the Pacific Northwest (esp. Washington state and British Columbia) and stands roughly 6-9 feet tall. Various native American legends have variants of this creature, some are notedly gentle, others are ferocious and capable of carrying off humans to be eaten.

No versions of this legendary critter have a worm-like head with teeth, but there's no reason why a mutant version can't exist.

So large, strong, quite clever, carnivorous, lives in the canadian wilderness.

Maybe one that got hurt and disfigured in a forest fire and now hunts humans because they are the only creatures slow enough chase down.

You do not have to make it up. Wolverines are very close.

Fishers are mustellids, in the weasel family. They are arboreal predators but too small for your needs. 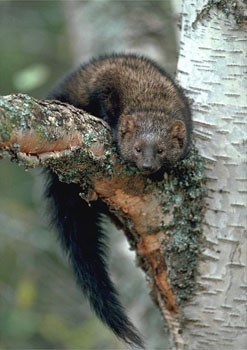 But wolverines are mustellids too. They live in the north. They can also be arboreal.

Wolverines are formidable predators. They are as strong, smart, relentless and fierce in the weasel way - they kill for pleasure. Wolverines can take elk and moose. A wolverine is outmatched by a bear and probably could not catch one by surprise by dropping onto it - unless the wolverine were smart enough to disguise its scent by rolling in the carrion it knows will attract the bear.

The dead grizzly can be an opening scene, like when they find the dead orca at the beginning of Jaws. The dead bear by the carrion, the side of its head torn off, its body uneaten.

1) Polar bears. the largest carnivores on land and quite willing to eat humans.

6) Coyotes. There is one case where Canadian coyotes killed an adult human.

7) wolverines. They can attack and kill humans but rarely do so.

Both mountain lions and wolverines are said to sometimes jump out of trees onto their prey.

So if you want to make your monster a hard science fiction monster instead of a fantasy or horror monster you should take one of those and make it much bigger, stronger and more dangerous and also make it much more likely to attack. Climate change or something has killed all its prey and it is starving, it has rabies, a human killed her babies, or like "Big Ghost Basin" it was burned in a fire and ferociously attacks campfires and those who make them, etc.

Beavermorph: the trick is, nobody ever survived to tell how it morphes. His strength is, normal beavers are cute.

8
How plausible is my monster?
4
predator and prey developing intelligence
6
Is petrifying vision plausible in an animal?
8
Anatomically Correct “Stranger Things” Mindflayer's Monster
1
Anatomically Correct City-leveling monster
6
How could a scientifically plausible Rust Monster quickly erode iron-based metal objects?
2
Could the kraken monster from “Evolve” (the game) feasibly exist?
0
Could the Goliath monster from “Evolve” (the game) feasibly exist
3
What might a cancer monster be like?