How do I design the solar transit of a hot Jupiter?

The world I'm designing currently has a gas giant of the type known as a hot Jupiter orbiting close to the sun and causing solar flares. I would like the inhabitants of my Earth-like world to regularly witness this planet transiting their sun, making it a center of religious life, and perhaps incorporating it into their calendar. If I can justify it being a time of increased flare activity then so much the better.

In the real world, Mercury and Venus infrequently transit the sun. However, a hot Jupiter has a large puffy atmosphere, floats very close to its star (0.015-0.15 AU), and has an orbital period of less than ten days. All this means that they transit a good deal more frequently. Apparently that's one of the reasons why we've discovered so many of them using the transit method.

Assuming the premise that an Earth-like planet in a system with a hot Jupiter might see regular solar transits is valid, I need to get an idea of how often transits will occur, and what they'll look like. This may be a little complicated because hot Jupiters tend to have weird orbits.

If possible, I'd also like to justify the transit being ...

But regardless of whether that's plausible, what I basically need are conceptual tools that a dedicated but uneducated guy can use to approximate when a hot Jupiter will transit its star in a way that's visible to an Earth-like world, as well as a working knowledge of the most likely parameters of such transits.

How can I plot the solar transits of a hot Jupiter as seen by an earth-like world? How close can I plausibly get to making this a regular and predictable event? Anything else I should know?

As a final note, getting this particular question right is rather important to me, so I'll offer a thank-you bounty to an answer I think is particularly helpful and complete. I've tried to be conscientious about my Wikipedia research, but I know little about astronomy, and always appreciate it if folks are willing to explain things to me. Thanks for any help.

Why are transits so rare?

A body's orbital inclination is the angular difference between its orbital plane and a reference plane. In the Solar System, this reference plane is the the ecliptic, such that Earth's orbit is contained in this plane (and thus it has an inclination of zero). Most of the planets have low inclinations, but Mercury and Venus - the only two planets an Earth-bound observer can see transit the Sun - have the highest inclinations, of 7.01 and 3.39 degrees, respectively.

This, combined with the fact that orbits aren't perfect circles, is why transits are so rare. Even when Mercury or Venus moves between Earth and the Sun, in what's called a conjunction, the planet often appears above or below the Sun - meaning no transit. If you lower the inclination of the hot Jupiter, you should be able to avoid this problem, making transits more common. 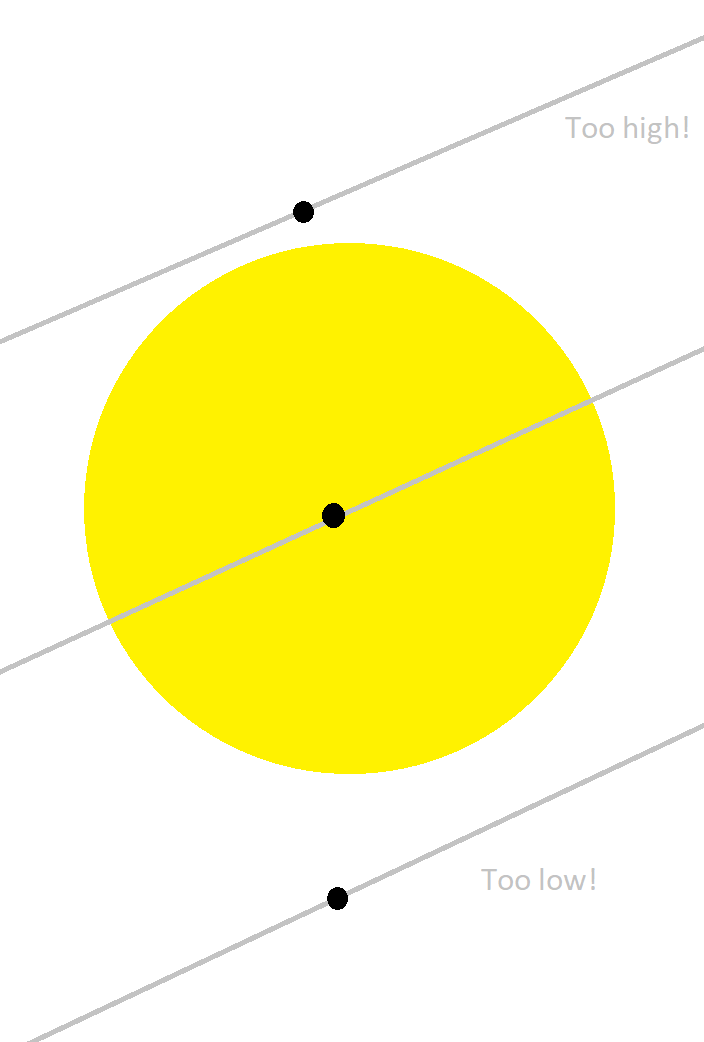 Three types of conjunctions for an inclined orbit. The top and bottom ones miss the star entirely; only the middle one crosses. I've drawn the hot Jupiter too small, though.

How common are transits?

Let's assume you go with this scenario. Assume your planet's semi-major axis is 1 AU, and the hot Jupiter's semi-major axis is 0.015 AU - small, even for a hot Jupiter, but certainly not improbable. We can use Kepler's third law to find that, if the star is about the mass of the Sun, they'll have periods of 1 year and 16 hours, respectively.

We need this because we want to calculate something called the synodic period, which is essentially how long it takes for the other body to appear in the same spot, i.e. the length of time between successive conjunctions. The formula is $$\frac{1}{P_{\text{syn}}}=\frac{1}{P_1}-\frac{1}{P_2}$$ where the inner planet has period $P_1$ and the outer planet has period $P_2$.1 We then find that the synodic period for this system is about 16 hours and 2 minutes - meaning that transits happen pretty often!

Given a hot Jupiter in a highly-inclined 10-day orbit, and an Earthlike planet in an equatorial one-year orbit, you'll get a transit every time the two planets cross one of the hot Jupiter's orbital nodes at the same time. This is the same phenomenon that causes solar eclipses and transits of Mercury and Venus here on Earth, and as you can imagine, isn't naturally a very common event.

The solution to this is an orbital resonance: the Earth-like planet needs to be in a roughly 1:36 resonance with the hot Jupiter. If everything is lined up properly, this will give you two central transits a year, exactly half a year apart. If they aren't lined up properly, you'll get zero transits, ever.

A resonance with such a high difference in orbital periods is rather fragile. In order to keep it from being disrupted, your stellar system should be free of other large bodies. Asteroids are fine, Earth-sized planets in the outer system are fine, but Venus and Saturn aren't.

Not the answer you're looking for? Browse other questions tagged earth-like astronomy solar-system gas-giants .

6
A Binary Sun, A Hot Jupiter and a Binary Mars...All Within View of Earth
10
Mass transit across the solar system
3
What does the solar system sound like?
5
Effect of Hot/Warm Jupiter atmosphere loss on Habitable Zone
2
How long is a solar-solar eclipse in a Binary Star System?
6
Effects of Hot Jupiters on habitable planets
7
Plausible reasons for multiple hot seasons in one solar year