Swimming in the rain?

This question is inspired by salmon swimming up waterfalls. I am aware that it is an entirely different thing, but I felt that it was worth mentioning in understanding the question.

“What would need to happen (or prexist) for a person to suddenly be able to swim through the skies during a rain shower?”

These are just some thoughts that I’ve had on a potential answer. A starting point for those who know more than me, or maybe just a red herring for all I know. Regardless, the ideal answer illustrates the combined requirements for a human person without the aid of magic or advanced technology to swim through the sky during rainfall.

The basic answer is that ... they need to apply enough downward force to the raindrops to move themselves upwards.

However, because rain is small, heavy and has a high terminal velocity, moving a [fin/arm/thing] fast enough to hit the rain drops would likely mean you'd get a higher efficiency using said appendage as a wing directly.

Of course, if you lower gravity, then you have slower rain and a lighter person and it becomes more possible, but you'd still end up with some appendage that is more fin or wing than human arm.

Also note that salmon can't swim up waterfalls for any great lengths of time. They jump up as quickly as they can rather than swim up gradually. So I doubt you'll end up with your person casually sauntering around the sky.

If you want to swim in a medium you prefer to have buoyancy supporting you.

Buoyancy is related to the difference in density between your body and the medium in which it is immersed.

If you consider the air during rainfall, you can estimate the average density as the weighted ratio of the volumes of air and water.

Since the average density of a human body is about 0.9 (water being 1), to have some decent support you would need to have at least 90% of water per volume of space.

This equals to be in a waterfall, where you would then struggle to oppose the downward momentum of the dropping water.

If a person would be able to swim through the skies while it rains, there would have to be some very unusual conditions.

A. Biologically, water causes the being to move upwards on contact. However, this is highly unlikely and quite complicated.

B. Technologically, contact with water fuels some sort of engine.

C. Sheets of rain. Normal swimming, maybe some scuba gear. This probably would mean that rain would come down differently in your world, something akin to the below, but a lot denser. 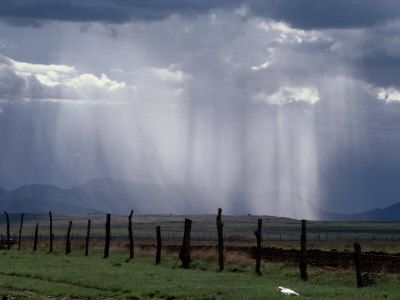 Yes, but it would probably require flippers, being a lot lighter, having more strength, and extraordinary weather conditions.

The amount of upward force produced if one assumes that the pressure on the "wing", is proportional to the surface area of the "wing" that faces downward. Wearing giant flippers would definitely help because that means more contact with rain.

In order to fly with these gigantic (and presumably heavy) flippers, one would need a lot of strength. This would allow the user to exert more force in total on the flippers, and would also allow him/her to "swim" faster.

I suppose being a lot lighter isn't really a requirement, but would help make flying easier. After all, that weight is dragging you down.

Finally, we have the weather conditions. The largest raindrops ever observed were about 8.8 millimeters across. Laboratory studies show that theoretically, the diameters of these raindrops could approach 1 centimeter (if isolated). Ignoring the isolation rule, one could, using super strength and giant flippers, probably swim around with much difficulty. In order to ease the workload on our pour user, it would be much more helpful if the rain came down in sheets like @Aethernolt said.

TL;DR: Your guy can swim if he has giant flippers, a lot of strength, being light, and being in the middle of a tremendous rainstorm with giant raindrops.

Edit: Lighter gravity, which causes less downward pull and allows for the formation of larger raindrops, would also help. In fact, if the atmosphere was thick enough (with water vapor from the rainfall, for example), and the planet's gravity was sufficiently low, you wouldn't need raindrops. You could just strap on some wings and fly. (If this method works as well, see https://what-if.xkcd.com/30/)

Maybe not rain but how about snow? Snow falls slower because of the larger area, so you would not need to push it down as hard or fast. Maybe something like a fairy fly's wing, but giant for humans.

Not the answer you're looking for? Browse other questions tagged physics alternate-worlds weather bio-mechanics .

8
Climbing up on running water

2
How can I explain rain pouring skyward?
12
How to make it rain men properly?
39
What would be the necessary conditions to rain bubbles?
6
How could it rain oil?
6
Would a permanent rain be possible?
6
Would pleopod swimming scale?
23
Can I set fire to the rain?