So I was designing some aliens who exhale colder air that they take in and one person gave me a really great suggestion, using phase change materials in the creature's make up to absorb the heat from the air. When looking into phase change materials I saw that GeSb$_2$Te$_4$ is one that can also hold data (not sure if that would come in handy or not) but my though process was, hey Germanium is similar to carbon and if silicon being similar to carbon and can be incorporated into some micro organisms maybe Germanium can, while bonded with the other two elements in order to make the phase change creature possible.

So my question is can GeSb$_2$Te$_4$ be used as the basis for a biochemistry to reasonably accomplish this goal, and if not would their be a better alternative (preferably using hydrocarbons)?

This creature gains its energy through the Seebeck effect: a difference in temperature causes different current carriers to move apart from each other. The carriers would then be neutralized on both ends; for example, NADPH and ATP are generated by the combined voltage of a thermoelectric pile. The material is then used for things like carbon fixation and production of sugars, or for movement.

The creature would be living alongside somewhere with a very high temperature gradient, or being able to carry a lot of ice at once.

One of such places are ends and side of glaciers. The creature would gorge on glacial ice when at night, move away from the glacier, then uses this stored cold energy to generate usable NADPH and ATP through the Seebeck effect from breathing in warm air. the ice melts, cooling the air that passes through the creature, then the difference of temperature is used to create energy.

The perception that this creature breathes out colder than it breathes in would be an illusion because in the warmer regions, when these creatures came out at day to generate energy, they are most likely to be seen, hunted, or felt.

I don't think that what you are proposing is thermodynamically possible.

If they are cooler than the air, yes, they can even absorb energy from the difference, and both end close to an intermediate temperature.

That's why your air conditioning system spends electricity, instead of gaining it.

Edit: There is no useful energy in high temperature, instead it is in temperature difference (see thermoelectric effect, as example). And you can use it when through heat exchange leveling temperatures. So, in order to absorb energy, the two bodies should tend to a intermediate temperature: 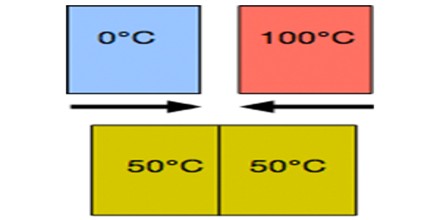 So, there are two options to absorb energy:

The problems with case 2 are:

You want a better alternative? Here's one that's actually (technically) a Carbohydrate; Ethylene Glycol. Among other things, it's primary use is as radiator coolant in modern society, which when you get right down to it sounds like the kind of thing you would expect a phase change material to be doing.

On top of that, it's also a primary ingredient for some 'smart' PSMs, like your Germanium based one.

There's only one catch; it's toxic to humans. Very toxic actually. What that means is that there would have to be a biochemistry substantially different to human physiology in place for this stuff to function inside a living body, but it's more likely to happen than your Germanium one for several reasons;

1) Availability of the elements
One of the reasons that earth life is carbon based is because there is a lot of carbon, hydrogen, oxygen, nitrogen, iron, etc. in the universe. Because they're common elements, if life can form in the universe, it's far more likely to be carbon based than (say) silicon or germanium based. That means that ethylene glycol (as a CHO compound) is more likely to exist or form naturally on another planet than a compound that includes Germanium, especially in quantities that can sustain a large and thriving biomass.

2) Compounds V. Elements
Put simply, you can do a hell of a lot more in terms of materials diversity if you focus on compounds rather than introducing new elements. If you take a look at most drugs and other substances that have a material impact on our health and / or behaviour, quite a lot of them are CHNO compounds, or some subset thereof. This is because our physiology already uses these elements in various compound formations so the drugs or other substances are designed to interact with our internal chemistry already. Introducing new elements into a carbon based life form only works if those elements can interact with CHNO compounds to create something even newer.

So; what you're suggesting may work, and in fact could be an energy extraction system on a planet where no photosynthesis exists. In such a case, your creature needs energy and may actually be able to directly draw it from a hot planet's atmosphere. In such a case, the physiology may not even be chemical energy based in the conventional form, but may have an internal exothermic reaction that extracts the heat from the ethylene glycol, meaning that it only needs 'food' for nutrition, not for energy.

As such, I can see such a creature existing on the surface of Venus for instance, where the heat and pressure could kill a conventional plant but such a creature as this could exist higher in the stratosphere, converting the heat energy around it to internal body energy and then consuming any nutrition it needs from that same cloud formation.

Not the answer you're looking for? Browse other questions tagged biology creature-design xenobiology chemistry biochemistry .

6
Organic Material able to store massive amounts of energy?
3
Can you create a living vehicle fueled by organic material?
6
Feasibility of Thermoelectric Metabolism
4
The anatomy of an organic microwave generator
5
obsidian/flint like substance of organic origin
2
Organic piezo-electric generation
1
Would it be possible to make a material synthesizer with a controlled biome?