Feasibility of an 'Oxygen Radiation Zone': a non-pressurized natural formation on Mars that provides suitable atmosphere

Humans establish colonies on Mars with slightly more advanced technology than we have today. The Martian colonists lose all contact with Earth. Over centuries, the Martian colonists develop a distinct culture (w/ practices, religion, language, etc). My story takes place in this culture. A fundamental defining element of this culture is technophobia / technological deterioration (for various irrelevant reasons).

I have two issues pertaining to the atmosphere of Mars that prevent human habitation. Firstly, the chemical composition of the Martian atmosphere is unsuitable: low O$_2$ and high CO$_2$. Secondly, the atmospheric pressure of Mars averages a mere 600 pascals which is unsuitable for human habitation. Somehow, my Martians need to be able to inhabit Mars and survive (but not thrive).

However, as aforementioned, the Martian populace are technophobic. Their technology is rather primitive, technological development is almost non-existent and technology from the very first colonies is irreproducible and/or lost. As such, terraforming is out of the question. As are more advanced technologies, such as spacesuits and pressurized habitats.

Therefore, I am trying to devise a theoretical natural formation that provides the Martians with a localised habitable area.

Currently, this natural formation is an unpressurized ‘Oxygen Radiation Zone’. Oxygen is released from underground in a volume significant enough to provide a local area with suitable atmospheric pressure and composition for survival (but not ‘thrive-al’). I have included a diagram to better describe this ‘Oxygen Radiation Zone’. Please consider the diagram from a birds-eye-view. 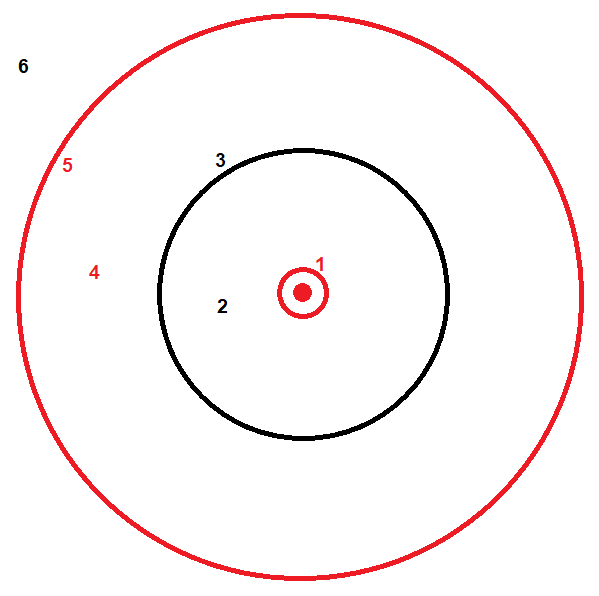 NOTE: In the diagram, the areas are well-defined, but I imagine the whole thing to be a pressure gradient, from the high-pressure ‘oxygen leak’ (1) to the low-pressure Martian normal (6).

Mars is asymmetrically heated in different seasons, which produces a mean overturning circulation called a Hadley cell. In short, this Hadley cell is responsible for the production of global-scale dust storms (among other things). Dust devils are localized convection cells that can reach 1 to 2 km at the bases and may be as tall as 8 to 10 km. How would these dust storms and devils interact with my ‘Oxygen Radiation Zone’? Would they be diverted around it?

I understand that this ‘Oxygen Radiation Zone’ is not scientifically accurate to the minute detail.

Is my design somewhat scientifically feasible? Are there any major complications that I may need to consider?

This is a whopper of a question. Thank you for taking the time to read it and provide me with feedback.

Not feasible; requires too much oxygen

Free expansion is a process where a gas expands into a vacuum. Your Martian atmosphere is not quite a vacuum, but it is close enough compared to the air pressure required for your people to breathe.

The math behind free expansion is

the ratio of volume increase is the inverse of the pressure decrease. We can model the expansion of the gas as a hemisphere (ignoring gravity, oops!). The volume as a function of radius is $$\frac{2}{3}\pi r^3.$$

The free expansion of gas into a vacuum is going to proceed at the average speed of the particles. The mean speed of the particles is based on the Maxwell-Boltzmann distribution and is $$\mu = 2\sqrt{\frac{2kT}{\pi m}},$$ where $k$ is the Boltzmann constant ($1.38\times10^{-23}$ J/K), $T$ is the temperature (lets use 210 K as average surface temperature), and $m$ is the mass of an oxygen molecule ($2.66\times10^{-23}$ kg). Plugging those numbers in we get an expansion speed of 17 m/s. Every second, the radius of expanding oxygen will increase by 17 meters.

As the radius of oxygen increases, the volume of oxygen will increase by the cube of that number, or a factor of almost 5000. We see from free expansion that the pressure drop is the inverse of the increase in volume, so pressure will drop by a factor of 5000 from a point 1 meter away to a point 17 meters away.

Using the free expansion formula and the ideal gas law, we can calculate an average pressure for each meter wide hemispherical slice of the expanding gas.The pressure at 15 meters away will be 11 bars, for example.

There is a 20 meter wide safe zone you could operate in, 45 meters from the oxygen source. However, this is with an Amazonian level of gas input to the atmosphere. Adding 285000 kg of gas per second is not reasonable. Lets say we drop the numbers of 285 kg per second. Now, instead of the range from 45 to 65 meters, the safe zone is from 5 to 7 meters.

Mars' atmosphere is immense, at the higher Amazonian rate, it will still take 55000 years to fill Mars' atmosphere with oxygen to a breathable level. But, where would you get that much oxygen? What mechanism could generate nearly 300 tons of oxygen per second?

The real question is, where does all that oxygen come from? Without any way to explain that, I have to label this one, non-realistic.

The only way you could make this work is if you went deep underground and had large cave structures with limited access to the outside world. This could allow a more realistic production of Oxygen to escape more slowly and thus have survivable pressure in the cave.

Of course you now have the problem of no daylight..

A better way might be to have pressure domes and suits, but have the inhabitants not know how they work. Suit maintenance and pre-use checks would be akin to religious rituals, as would repairs on the domes etc. They don't even see them as technology, they are just part of how the world works that they have always lived with and failing to properly sacrifice oil to the Suit God has a vivid and memorable punishment from the gods; when the joint fails and the inhabitant is exposed to near vacuum. Apostates are fine if they keep the core tenants (important safety checks and maintenance) and die if they don't.

A final option would be to have mars partially terraformed, enough to have a (perhaps low pressure but livable) atmosphere. There are a number of proposals for doing that including https://phys.org/news/2017-03-nasa-magnetic-shield-mars-atmosphere.html

What they found was that a dipole field positioned at Mars L1 Lagrange Point would be able to counteract solar wind, such that Mars' atmosphere would achieve a new balance. At present, atmospheric loss on Mars is balanced to some degree by volcanic outpassing from Mars interior and crust. This contributes to a surface atmosphere that is about 6 mbar in air pressure (less than 1% that at sea level on Earth).

NASA proposes a magnetic shield to protect Mars’ atmosphere At one time, Mars had a magnetic field similar to Earth, which prevented its atmosphere from being stripped away. Credit: NASA As a result, Mars atmosphere would naturally thicken over time, which lead to many new possibilities for human exploration and colonization. According to Green and his colleagues, these would include an average increase of about 4 °C (~7 °F), which would be enough to melt the carbon dioxide ice in the northern polar ice cap. This would trigger a greenhouse effect, warming the atmosphere further and causing the water ice in the polar caps to melt.

Yes, it is possible. Consider that at the bottom of a valley one is closer to the center of mass of the planet, thus gravity can be relatively stronger, and this could reflect on the local atmospheric pressure. 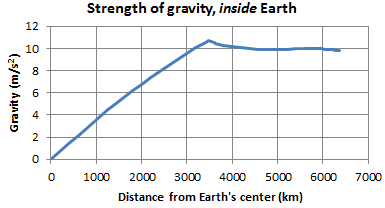 On Earth we don't have valleys deep enough to experience dramatic difference, but we have such feature on Mars: Valles Marineris.

Up to 7 km deep, the pressure at its bottom is about 0.168 psi, while the average atmospheric pressure on Mars is 0.087 psi. About double, as you see.

Still not high enough to take a walk in T-shirt, but if the atmosphere on Mars would be more dense, it would be first spot to achieve habitable conditions.

(this answer has been posted initially to this question, posting it here since it also answer this one. Credits @Willk for the hint)

29
How deep must be a pit on the moon to hold atmosphere at 1ATM on the bottom
19
Could a moon or planet exist with "puddles" of breathable air in deep craters?

3
How can future Mars colonists combat intelligence loss?
8
Breathable Mars?
14
Designing a flag for Mars: drag and proportion
16
How to get down Valles Marineris
10
Pressure suit design that would allow a low pressure-adapted being to survive on Earth?
11
How do I increase air pressure for the planet Mars?
6
Is this Martian creature plausible?
3
Is this fictional habitable exoplanet of Alpha Centauri A realistic?
4
Feasibility of the Ascendia System?
6
Exoplanet sky with suspended ice crystals