Creating a new domain of organisms

Anyone who has taken high school biology know that all life on earth are divided into three different domains: Bacteria, Archaea, and Eukaryota. On a planet in the outer habitable zone of a K-type star with approximately 1.5 Earth oceans of water, there is another domain: Duotorusa.

This is an image (shamelessly borrowed from TeX Stack Exchange) that I believe would show how a Duotorusa unit would look like in principle. The Duotorusa unit would be anaerobic, changing polysaccharides into waste products that it expels. They have two units that each perform different functions.

However, there are some technicalities I need to smooth over before I can make this infect humans coming to the planet. The most important thing is that this domain would be between Eukaryota (with many, unlimited cells), and Prokaryota (with one cell only), being a multi-cellular organism that is limited to having two cells. What is the division between this being an organism (Domain Duotorusa) and this being a mutualistic relationship (two organisms, Domain Bacteria)?

*To all those asking what evolutionary advantages having two units would carry, that will be asked in a separate question.

An organism will reproduce, and pass on its DNA to its offspring. Anything that develops from that parent's DNA is an organism of the same species.

Two (or more) species in a symbiotic relationship will each have distinct DNA and distinct methods of passing on its DNA. The algae and fungus in a lichen; the zooanthellae and corals in a reef; you and your gut flora; these are all examples of symbiotes where there are two distinct organism pass on two distinct sets of DNA in two distinct reproductive events, even though one species can't live without the other.

Your assumptions about what defines those groups is wrong.

Unless your organisms are descended from earth life they would not have any earth domains (so they can't be bacteria), it would have it's own superdomain (insert name here) as it is not earth life. All earth life falls inside the Biota superdomain. They would then have all their own domains, phylum, etc under this superdomain.

If they are both genetically identical and descended from bacteria, then they are bacteria just a multicellular bacteria. If they are genetically distinct then you ask whether they can survive independently and whether they reproduce together, if neither can survive independently and they reproduce as a single unit they might well be considered the same organism. You also have to decide where each part comes from, if they are distantly related then you might well get a new grouping name, and a new domain is not a bad choice.

I don't think "domain" is the right level of classification

This won't specifically answer your question, but as you've posed it I think my answer will be more useful than a flat "no".

At its most basic, classification is a story about ancestry. When properly done, a monophyletic clade includes all living and extinct descendants of a given organism. You must have gone to high school rather recently- the 3-domain system has only been around for 40 years, and was only widely accepted in 1990, according to Wikipedia. Previously, Monera was popular, which came after the five-kingdom model, which came after the three kingdom model... etc. Essentially, whenever we've found something suitably ~weird~ it causes a reshuffling of the ancestry story based on the new information.

Finding life on another planet definitely counts as suitably weird. There are a couple ways that this could happen, and how it did will be the deciding factor about how to classify things.

In this proposal, life is scattered throughout the universe and both planets have been arbitrarily "seeded" with life. If this is the case, then the ancestor of your Duotorusa is most closely related to our LUCA. This system would require the introduction of a new, higher classification level- one that includes the planet of origin in its classification, for example. To place Duotorusa at a domain level within our current binomial system would require that Archaea, Bacteria, and Eukarya ALL were seeded separately.

Life arose independently on both planets

This is another possibility. However, we run into the same problem as above- in order to properly create monophyletic clades, we'd need to include a new, higher-level classification domain. Since your Duotorusa's ancestor and our LUCA are comparable, Duotorusa's classification as a domain is misplaced, since it doesn't share a common ancestor with our LUCA.

Life was sent from one to the other

Here's where things get interesting. If some poor extremophile microbe was blasted to another planet, then all life on one planet would fit within the tree of the other. For all we know, we're all the descendants of one Duotorusa and should fit our domains within their domains. Similarly, if Duotorusa was truly a contaminant from the human spacecraft (serves them right) or otherwise from Earth, only then would it be classified under Bacteria. We would never try to shoehorn an alien organism into a category that it clearly doesn't share a common ancestor with.

I drew out some trees: 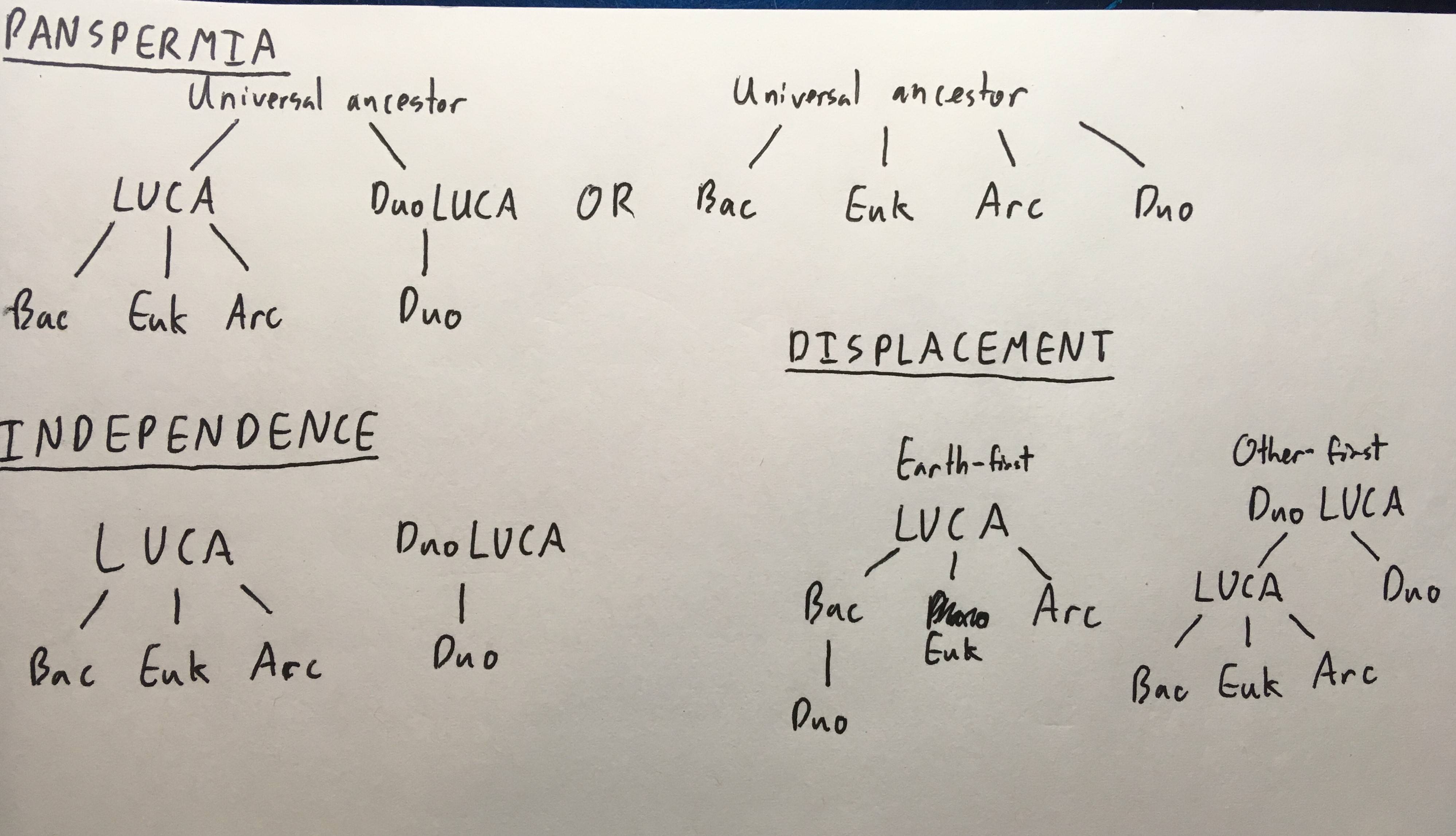 Basically, your new domain shouldn't be within any known framework. We'd need to come up with a new system if we found life outside the solar system.

I would say that it's the symbiosis itself that might distinguish between this being a (compound) organism vs two tight-knit but separate organisms. Especially if that relationship has become so intertwined that neither constituent can survive without the other.

Might be interesting to see if this kind of compound organism structure is found anywhere else on this planet! Either as a symbiont within a eukaryotic cell or else as a kind of communal super-organism.

As kingledion says, though, reproduction is an important factor: how do these guys go about it? Do they require each other's input in order to reproduce? Do they ever exchange DNA (bacteria are notorious for absorbing foreign DNA) within the compound unit? Do they need to pair up with another compound unit of the same species?

Not the answer you're looking for? Browse other questions tagged science-based biology microorganisms .

13
Xenotaxonomy: the Science of Categorizing Extraterrestrial Life
1
What evolutionary advantages would limiting cells per organism give?
-1
How large would this religion need to be to rule the world?

8
Bioluminescent Organisms that use Light to Communicate?
1
What evolutionary advantages would limiting cells per organism give?
16
How could an Earth-like planet develop huge pinkish-purple forests on ocean surfaces?
7
Sentient colonial organisms?
3
Eusocial colonies as individual, sentient organisms
5
A sentient "eusocial" swarm and maintaining communication
2
The chemistry of a long living (alien) animal