Building a workable nuke in my backyard is it feasible?

I was just reading the Wikipedia article about the 1961 Goldsboro B-52 crash. In the bomb recovery section there is this quote (emphasis mine):

Excavation of the second bomb was abandoned as a result of uncontrollable ground-water flooding. Most of the thermonuclear stage, containing uranium and plutonium, was left in place, but the "pit", or core, of the bomb had been dislodged and was removed. The United States Army Corps of Engineers purchased a 400 feet (120 m) circular easement over the buried component. The University of North Carolina at Chapel Hill determined the buried depth of the secondary component to be 180 ± 10 feet (54.9 ± 3.0 m).

Naturally my understanding of building nuclear weapons is minute but I seem to recall reading that one of the harder parts is enriching the fissile materials. Since the fissile materials in a field in North Carolina are present that hurdle is overcome. It seems to me that a determined party could purchase land near the site and tunnel to the fissile materials. After all people were able to tunnel to a depth of over 200 feet on Oak Island so the flooding here should be manageable with enough determination.

Could someone who has a PhD in nuclear physics build a functioning nuclear bomb using the 50+ year old fissile material buried in North Carolina? Or would they need additional controlled items like tritium and deuterium that wouldn't be present to build anything more than a dirty bomb?

The key is to re read the description of what was removed and what was left.

The "pit" is the core of the fission device, which provides the energy to trigger the fusion reaction in the second stage. It is an actual fission bomb in of itself (although extremely miniaturized and not in its own weapons casing, once removed from the thermonuclear bomb it is just the "physics package" and would have to be repurposed to make a weapon).

The second stage of a thermonuclear weapon is the Lithium Hydrate fusion fuel. The intense x ray radiation and flood of neutrons focused by the hohlraum provides the conditions to initiate the fusion reaction. Interestingly, there is often a plutonium "Spark Plug" in the centre of the fusion fuel. It will only go critical under the intense conditions created by the triggering of the primary. 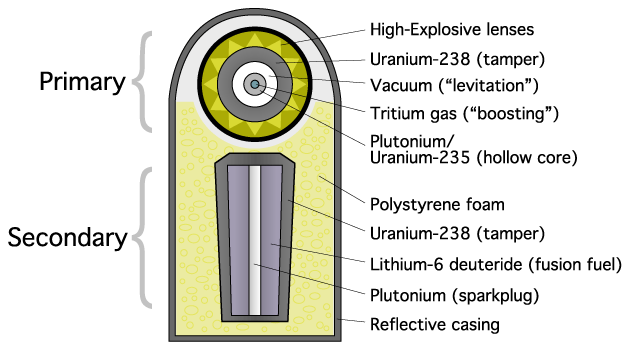 Possible layout of a thermonuclear weapon. The spherical part may have been what was removed, leaving the rest behind

The last part made of Uranium is the "tamper" or "pusher", which is generally made of depleted uranium. Its primary job is to hold the flood of radiation and contain the device for the critical microseconds while the fusion reactions are initiated in the second stage fuel. If it is a uranium tamper, as hinted at in the quote, then it also can fission by receiving the flood of high energy neutrons released by the primary. This is the third stage of a thermonuclear weapon, and can provide a great deal of the energy release. The "Tsar Bomba" used a lead tamper, because it was calculated the use of a uranium tamper would have doubled the yield to 100MT. The bomber barely made its escape with a 50MT blast, and extensive damage was created hundreds of kilometres from the explosion as it was, so dropping the uranium tamper was probably the smartest course of action.

So if you were to somehow salvage the remains of the nuclear weapon from its hole, you would potentially recover a subcritical mass of plutonium and a depleted uranium casing used for the tamper. Neither will be sufficient to build your own nuclear weapon, either fission or thermonuclear.

At first blush, I'd say no, and probably for different reasons than you'd think.

Nuclear physicists are a smart lot, for sure. However, building a nuclear weapon requires a lot more knowledge than just an understanding of how the fissile material reacts and breaks down. You need a whole host of technical and engineering knowledge and skill since you can't just look this stuff up online. Your average Ph.D. probably doesn't have the means or expertise to design and fabricate everything else needed for this project. You can't buy bomb parts at Home Depot or Grainger.

Consider the Manhattan Project. It had, among other things, a force of military engineers and technically-skilled personnel in addition to the civilian scientists. Even with all of that, many parts of the project were contracted out to be fabricated (which your lone rogue scientist can't do). Granted, they were trying to figure this all out from first principles, but you're going to have to do the same if you don't want the FBI and the military finding out.

TL;DR there's much more needed to make a bomb than just the fissile materials, and that information isn't going to be readily available.

Even assuming you had the fissile material (you wouldn't), it's not just an issue of materials, but of precision in putting them together. In even the simplest nuke several hundred incredibly precise actions must occur with sub-1/1000th of an inch tolerances and within microseconds of each other. There is no way you can get the materials, specialized components, and precision machines without spending hundreds of millions of dollars and setting off alarm bells in 3 letter agencies from the FBI to MI6.

Not the answer you're looking for? Browse other questions tagged reality-check nuclear-weapons or ask your own question.

52
How would one build a refrigerator to survive a nuke?
52
How can I build a Nuclear Reactor in my backyard?
29
Would it be possible to accidentally nuke ourselves?
33
How would one design an undetectable nuke to hit the Moon with?
39
Would EMP From a Nuke Stall a car?
23
How long would it take to nuke an alien spaceship in orbit?
4
Single-use nuke-propelled mass driver spaceship
5
Plausibility of running Hoover Dam in a post-nuke world?