How would a tiny robot see?

We have a tiny robot, insect like, barely five millimetres long, but with an almost perfect AI. The sensory input consists on an array of chemoreceptors, vibrissae, and cameras. It can fly through air or swim in water.

How would the cameras work? What would be the effects and physical limitations of their small size? Would it be able to see something that a normal sized robot with equivalent technology couldn't?

We can safely assume technology as advanced as necessary, as the story is set on an future of well established interstellar travel.

If you're willing to 'see' only in a limited spectrum, you can use a tiny, narrow field-of-view, camera, with a collimated filter.

This would only let you in one very specific direction at a time. Think of peeking through a pipe or tube.

The astute world builder might point out that looking through a tube isn't practical.

But you can get around this by having a hi-speed, low-resolution sensor (hundreds/thousands of frames per second). And then waving it about really quickly to scan the environment. Couple this with the AI the robot has, and you have a plausible vision system.

These sensors exist today and, while not really affordable for the home user, they won't break the bank.

For reference, optical sensors can be made very small. A single sensing element (a pixel) in a Canon EOS 7D is 4.3 x 4.3 um. Micrometers. Suppose you choose to have 'eyes' of 100x100 pixels, the eyes are less than 10% of your robot's size.

To point these eyes about, you wouldn't want motors. Piezo actuators would be my first guess.

By and large, cameras need lenses, otherwise they're uselessly out of focus (trivia: pin-hole cameras are the notable exception to this, and the mechanical system I described parallels a pin-hole camera).

But lenses are; large, heavy, fragile, and expensive. Two of those things are entirely unsuitable for a tiny robot.

The workaround to this is; don't use a lens, capture the out-of-focus image... but on a craftily designed sensor of a particular shape. Because the image follows certain mathematical rules (both because of the sensor and because of physics), it's possible to pour mountains of maths and signal processing techniques to reconstruct the original image to a useful degree.

This paper is what gave me the original inspiration. It's very heavy on maths; but you can skip that entirely. The interesting sections are the Abstract as well as sections 1, 3, and 4.

Does this have to be camera(s)?

What if it used a tiny device that relied on echolocation? If it just sent out constant inaudible pings that relayed information about its surroundings.

Also, when designing robots to act like wildlife, make sure you're pulling from said wildlife as much as possible. Like you said, chemoreceptors, vibrissae, these things are important. It'd be really neat for this tiny robot to have a pair of antennae like ants have that help them feel around.

If it does need to be cameras, though, I would say (assuming technology is at this point) give it a 360 camera placed in the center of its body. Also give that camera the ability to see in different spectrums. There really isn't much that would make this different than a normal sized robot, but the advantages are still apparent in its small size. I'd rather have five robots so small and well hidden you can't see them than one big one feeding me information.

I hope this helps some, the idea sounds really cool. Let me know if I've totally missed the mark.

At this size, you'd basically have a pinhole camera if there was only one or two, or you could have something like an insect's compound eye. However, a pinhole camera suffers from underexposure problems, and would require extremely sensitive photoreceptors to be useful, though it does have the advantage of having a very good depth of field, while a compound eye suffers from resolution problems.

Adding a lens and a larger aperture to a pinhole camera that small would probably be counter-productive, as you'd then get more optical aberration, and the solution might be some sort of ultra-miniaturised photomultiplier

In either case, the eyes would have to be really big (relatively speaking of course) to be useful, probably (like a fly's) taking up a quarter to a third of the available volume in order to achieve any useable resolution.

The basic idea is that you don't need conventional optics to form an image. You can trade compute for optics and dispense with lenses and other trappings of macroscopic cameras. In theory, I would assume the type of camera described above could be made arbitrarily small.

Something insect sized can be made now, though with little capability. You're better off hijacking an existing insect. 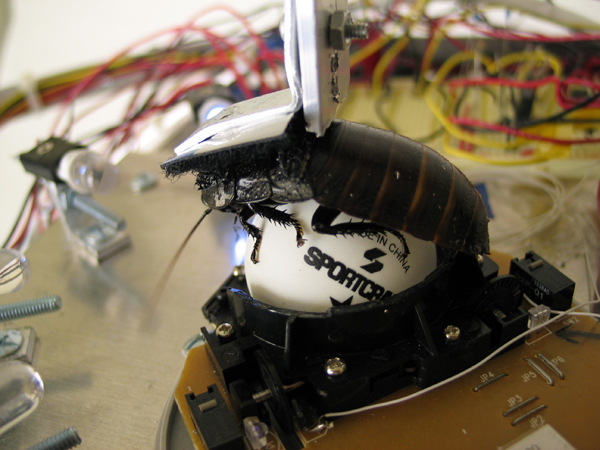 Ultrasonic range finders are very common for robotics from toys to vacuum cleaners and manufacturing, especially at small ranges where they can be very accurate. Additionally these devices take very little processing power to interpret. With range they loose much of their usefulness. Example:

A structured light scanner may also be used in moderately close quarters for similar functionality, at the cost of high level 3D data interpretation.

Cameras may be used with object profile identification to interpret their surroundings, but this also requires quite a bit of processing and can be very inaccurate.

Most small robots have vision systems catering to specific needs, a Roomba might use infrared or ultrasonic parallax but would be incapable of navigating outdoors or even large spaces without a secondary system (those devices record their path to allow returning to a charging station).

Not the answer you're looking for? Browse other questions tagged technology physics .

7
How would a dead cyborg differentiate itself from a robot?
1
Implications of Perfect CGI
4
How would much stronger gravity affect tiny living things?
8
As a time traveler, how would I see quantum randomness change history?
13
What would the neighbours see?
46
What would happen if the Earth struck a tiny but immovable object
0
How plausible does the power source for this fictional giant robot sound?
4
Can tiny astronauts reach space?
6
Tiny electrical generator?
17
How would a robot make noise and speak without built in speakers?